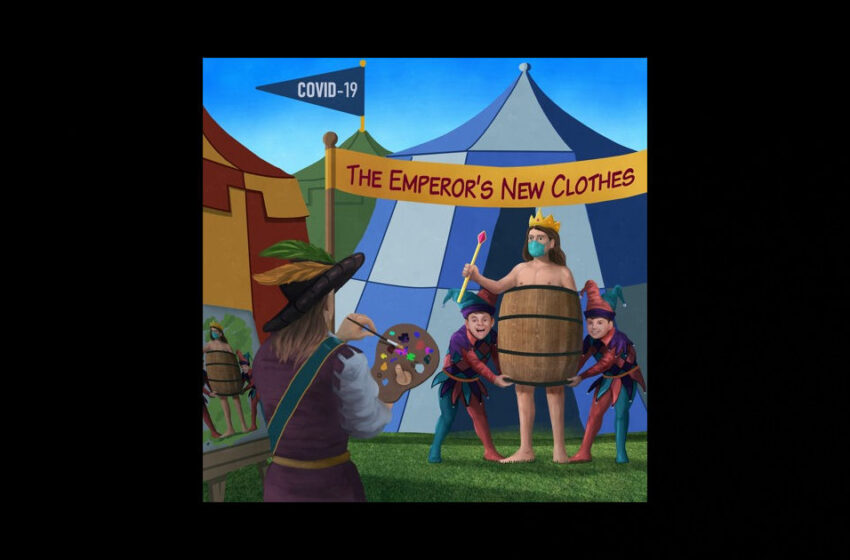 If you’ve been following along with the saga of reviews we’ve put out on our pages discussing Turfseer’s music, you already know it hasn’t always been easy.  A confrontational artist & songwriter to say the very least…he’s written a series of pandemic-based tunes that have been challenging in a plethora of ways, and this new cut “The Emperor’s New Clothes” would certainly be included in that growing list.  We see most things from the opposite sides of the coin, which has never been any secret to anyone reading…yet we keep meeting here in this odd little place of ours on the internet through music, which I suppose you could consider to be our middle ground.  Don’t get me wrong, I’ve said numerous times on these pages of ours that I’m more than fine with being challenged in whatever ways any artist or band can come up with, and in many cases, fully believe that much of music and art SHOULD be challenging to some degree as well…but I ain’t gonna lie to ya, I really did start this whole project at sleepingbagstudios to mainly enjoy myself.  Turfseer classically makes that difficult for me, and on purpose…otherwise he’d be elsewhere; as to why he’s chosen this specific place to raise his arguments continues to be the unsolvable question.

In listening to “The Emperor’s New Clothes” I pondered all about the purpose & motivations of Turfseer’s material, like I generally do with just about everything I’ve heard by this guy and his crew of collaborative talents gathered from far & wide across the internet.  I started thinking about all kinds of stuff…that’s how Turfseer’s music works and always has – if you’re not careful, you’ll end up down the rabbit-hole and researching bizarre info & ideological arguments all night long.  I thought about the body of work I’ve experienced from Turfseer as a whole…what it stands for…what it represents…and what its true purpose might be.  It could be communication of information to a degree, if you accept its accuracy of course…it could be created for the purpose of enjoyment & entertainment as part of the theatrical play being assembled in the background by Turfseer…or maybe it’s just an available soapbox that he’s capable of ranting from, with the ability to reach many ears around the internet; any and all of these reasons could be justifiably valid.  He’s drawn his line in the sand & you know where he stands.

My thoughts turned to a completely different place altogether, loosely connected.  I started thinking about an old assistant manager of mine, who I’d often refer to in discussions as “Eeyore” – you know, the character from the old Winnie The Pooh series.  I called him that because he’d readily complain, yet never offer any solutions.  I called him that, because contributing something positive to the environment somehow seemed beyond the guy…and yet, he couldn’t quite comprehend why people wouldn’t be clamoring to work with him at the same time either.  I ain’t gonna lie to ya – that’s kinda how I feel about these pandemic tunes overall – Turfseer’s included of course, but all of them in general; sure we can be insightful, sure we can be documentarian in what we create and that’s important too – but I can’t think of any song that’s really furthering any side of the argument or attempting to be brave enough to offer an actual solution.  And so this whole situation kind of comes out like a constant droning complaint, repeating itself in different forms, over and over and over.  Part of me wondered whether or not that is also part of the intended design of these controversial tunes…maybe some kind of mental submission of sorts…I’ve witnessed so many capable minds completely break down over the course of this pandemic and the isolated times that come with it…many people I respected personally, now lost to the oblivion of the madness induced by impatience & a tremendous lack of credible & real information.  I’m feeling pretty unbreakable here as I always tend to…which is why it always ends up being a strange & thought-provoking experience with Turfseer and his music…neither of us have demonstrated any kind of willingness to change our perception on the many issues surrounding the pandemic…so again, why choose here?  What has him interested in communicating to a brick wall like me, even though I’ll listen?

As I’m sure you can all tell by now, from this review or the others, it’s always objectivity he challenges most.

Heading back to the lane I’m most comfortable in, let’s discuss this tune from both sides of the coin, in knowing the context of the Turfseer mindset, and from the perspective of someone else other than me.  When it comes to the lyricism of “The Emperor’s New Clothes,” in general, I like what I see quite a bit in how it’s written – which Turfseer may or may not like himself.  To me, he’s got quite an interpretive & somewhat ambiguous storyline to go with this particular song…as in, sure, if you’re paying attention and up on your current events like ya should be at a time like this right now, then you’re likely going to know what he’s driving at in lines like “We’re grown so weary, in all of their theories/Just how these demons are spread.”  If you’re just passing through however, stopping in for a slice of what Turfseer puts out there into the world, much of this cut might fly right overhead, given that he’s writing allegorically & metaphorically as is his wont & signature style, there will no doubt be listeners that will believe this is solely based on fiction alone.  It’s in digging deeper into the sentiment & meaning of his words, examining the entire story as a whole, and again, in knowing the direction of his previous material, that you’d conclude without question that this cut belongs right with the rest of Turfseer’s pandemic tunes.  So it really kind of depends on what he’s personally going for and whose eyebrows he really wants to raise out there; on the one hand, he’s creating entertainment that’s assuredly going to find an audience that digs on his partly-Pop/partly-Folk/partly-Theatrical-based songs…and on the other, you have to wonder whether or not he’s looking to hit the target more obviously, or build an entire storyline to support all these songs when it comes time to make the musical happen, which you’d assume he would.  As we always say, context matters – if you’re familiar with Turfseer’s music, you know 100% what the subject & theme really is, the rebellious spirit his words possess, and why.  All I suppose I’m really saying is, the more you understand his mindset, or at least try to, the more you get out of his music as a whole.  I’m consistently interested in what he’s up to on a personal level, because his machine moves differently than my own does; I both see & hear value in that, even if I don’t always feel like I fully comprehend it all myself.

As far as the song itself & the performances & execution & all that stuff…I’m not really inclined to complain, but it’s also a tougher song to get extremely excited about this time around too.  If I’m being entirely honest, the main melody sounds like it could be a theme to something akin to Dallas or one of those melodramas from daytime TV back in the day…I’m not saying that won’t be YOUR jam, maybe it is – I’m just saying it was a bit harder for me personally to find my way into this one, even though I felt a much stronger attraction to the clever design of Turfseer’s words in this particular single.  His poetry is as on-point as ever with his artistry & craft on display…again, I don’t think his intentions were to fire missiles at anything in an obvious way, so I have to assume he’s nailed the way he wanted this track to come out with the interpretive values it has.  I felt like singer Georgia Octavia had some genuinely stand out moments, and I also felt like she had a few spots where she was still searching for the right cadence or energy to best suit the song as well…nothing so detrimental that you’d be turned off by any stretch, but evidence that further corners could still be rounded, or that perhaps the process was rushed a bit more than some of the other songs we’ve experienced from Turfseer in the past.  The backing vocals from Scotty Wilson all sound strong and support Georgia really well throughout “The Emperor’s New Clothes,” and ultimately, there’s a real remarkable contrast that occurs between the idea and sound itself.  We’re talking entirely about a song that’s doing its level best to poke holes in the theories behind our isolated times, of which Turfseer and I agree there are many to be had, even if we don’t think they’re the same ones – but in either event, no matter which side of that seriousness you find yourself landing on, you’ll notice the spirited, inspired, and uplifting approach to this song is an interesting choice to pair with the sentiment.  Think isolated times, and warm inviting sound – it’s almost like a song that sounds like it would have otherwise brought us all together for a big ol’ hug, were it not for all these confounded rules, right Turfseer my pal?  Saxophone is excellent in the background…I think that’s what that is…sounds like there’s at least perhaps a trumpet or some other brass in the mix as well, which I also liked every time it showed up.  The guitar solo is freakin’ fantastic, and makes for a major highlight in creating a versatility & new spark to fuel this song’s fire in the run to the finale…solid ending, and story-wise overall, as always, Turfseer gives you plenty to consider, ponder, think about, and piece together for yourself.

Listen to more music by Turfseer at Spotify here:  https://open.spotify.com/artist/4Dt7GYIfuKySG0bQ66dTle