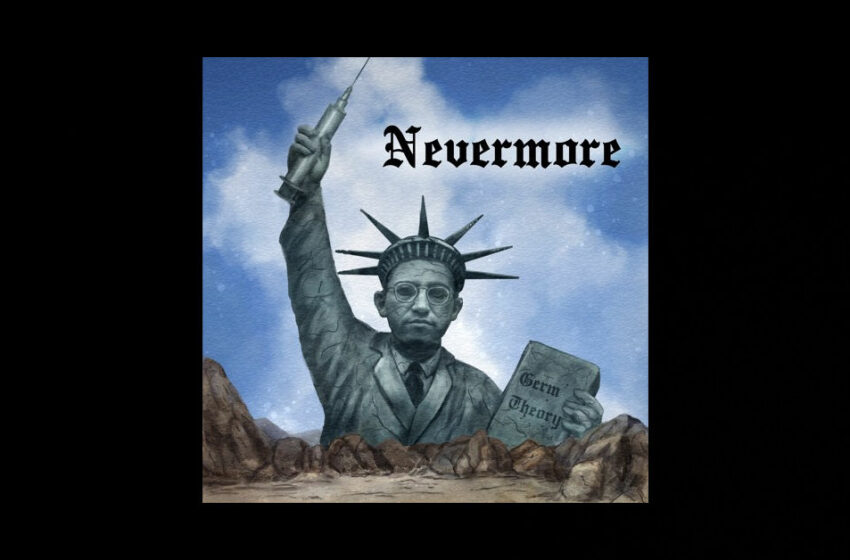 Turfseer is definitely one of the more interesting characters out there in the scene, I’m always willing to give him that.  Dude’s been working away on a harvest of Covid-19/pandemic tunes this year – we’ve seen a couple show up here in review in the past in discussing “The Virus Is My God” and “The Ballad Of Typhoid Mary” – and he’s back yet again knocking on all our doors with a new single in 2020, the third in a trilogy, based on the outline of Edgar Allan Poe’s legendary poem “The Raven.”  True to his style of writing and perspective that he’s revealed throughout the tales he’s woven in these past pandemic cuts, Turfseer once more dives deep into a mix of folklore & poetry to make the points he wants to make.  A solid combination of art & music with a distinct point of view that’s clearer than ever in looking at the whole of the trilogy…whether you find yourself in agreement with the points being made or whether it raises the hairs up on the back of your neck bristling in protest – it’s undeniable how much craft has been put into these songs Turfseer has been creating.  “Nevermore” reaches for an even more theatrically-based style of sound, created by an international wealth of talents that come from all over the map, including the USA, Italy, Indonesia, UK, & Estonia.  Points scored for unity through music – take that isolation!

So…the positives.  I think the female lead shows a lot of expression in the way she sings; bold when the song calls for it, graceful when the melody requires.  I loved absolutely everything about the way the orchestral instrumentation & piano interact between each other…quite honestly, there are multiple moments that on a musical-level alone, I found myself in awe of just how majestic & epic this song became.  All-in-all, I think for my own personal taste and as far as Turfseer’s tunes are concerned, the music on “Nevermore” is probably by far my favorite of the handful of songs I’ve heard from him so far.  For those of you out there unfamiliar with his work so far, he serves as the main captain of these collaborations & songwriter for all…but he also deserves a lot of credit for bringing together a lot of unique talents & musicians into his world to share in these moments.  The backing vocals also came out spectacular and added emphasis to the lyricism…I liked the placement, tone, sound…all that was great too.  I don’t know if there’s anything I can do to take my ears off of the violins…or strings…I’m never 100% sure about what orchestral instruments are being used in an ensemble like this…cello & such…all I can tell ya is what I like to hear, and this song “Nevermore” is full of exquisite musicianship at all times.

Lyrically, as ever, Turfseer gives you plenty to consider and for your brain to chew on – and I personally loved the tie-in between the design & flow of “The Raven” and how it ties into the conclusion of this trilogy of tunes he’s created.  We differ when it comes to our interpretation of the pandemic & whatnot, but that’s always been fine with me…I’m assuming with Turfseer returning to our pages several times now, he respects our opinion equally.  Points scored for civility – take that divisiveness!  I’ll say this – I do think that “Nevermore” makes it somehow much more clear as to Turfseer’s perspective on the Covid-19 era we’re living in…and for some of you out there, I have no doubt you’ll completely agree with a lot of what is being said & sung.  I find people fascinating personally…I’m not entirely convinced that the people on the side of thinking “we’re stripped of all our rights” might not maybe just be overreacting like, a lot, in advance of when it’s necessary…but that in itself is somewhat part of the point Turfseer is making in “Nevermore,” and subsequently many of his tunes that we’ve discussed here.  The real question is how much questioning is required to answer the question in the first place…and even then, when we think we know whatever it is we think we know – will we in fact, act in time, and in the right way?  To draw the line back to the current pandemic we’re all still stuck inside of, the same very much applies and is implied through the writing of Turfseer – are we approaching ANY of this in the right way? – is essentially the question he’s ultimately asking.  Time will tell I suppose.  I don’t pretend to have an answer for that…but I do appreciate that Turfseer makes me consider whether or not that I should.

I don’t really have any specific negatives that wouldn’t have already been implied somewhat when it comes to “Nevermore.”  Obviously Turfseer takes a chance in regards to writing polarizing tunes when it comes to his lyricism…and it’s more than clear he’s comfortable & confident in doing so.  Is his perspective, or the perspective of the characters inside of the song going to turn a few people off in the process of listening & dissecting the words of “Nevermore” and the other pandemic tunes?  You bet.  And so they should!  Honestly, if you’ve got a point of view in your art in this world, it’s not gonna gel with everyone, nor should that ever be the expectation.  Plus it would just be plain weird – for a guy like Turfseer that would clearly support free & critical thinking, to have everyone out there draw to the same conclusions whether they loved it or hated it, but unified as one, well that would be like…it’d be like this strange implosion of the very concept.  So sure – there’s always a risk in creating polarizing songs, and there always will be.  We live with those choices as artists – and we thrive on them as well.  Indifference is the real enemy…and quite honestly, no polarizing tune can be described by such a word – so that’s a plus when it comes to “Nevermore,” you’ll hear the words and come to your own conclusions, but it’s undeniably the kind of writing that gets people talking.  Which I’d imagine, is really the ultimate intent.  Really, you can look at it from either side of the coin and you’d be right – polarizing songs & subjects can absolutely work for you in many ways, and they can work against you too…it’s all about whether or not you choose to let that matter to you as an artist or band & have the strength to carry your convictions.  I say polarizing things in my writing all the time…stuff that I’m sure the people reading & listening don’t agree with at all, let alone the artists or bands that created the song or record in question – and I sleep the same way every night, peacefully.  Right or wrong, I speak my truth…Turfseer does the same through the songs he creates, and I fully respect the man for doing so.

Where “Nevermore” gets a bit trickier and a lot more niche is in that theatrical design it possesses – and much like the polarization issue, there’s next to nothing that can be done about that, nor does it need fixing – it’s just a very defined style of music that appeals to some & not to others.  I’m long on the record here on these pages as pretty much always having a tough time with anything that could be described as having a theatrical element or sound to it…it’s not my personal jam, but on a piece by piece basis in breaking something down…well…as you’ve already read, there are many things to appreciate, like, and even love about a song like “Nevermore” in that sense.  I certainly don’t hold a style of music that’s not my thing against any artist or band out there…I’m objective – “Nevermore” completely hits the mark for what it’s seeking to be & what Turfseer’s looking to communicate to the world.  Probably a bit hard to imagine it becoming the summer-song to turn up while cruising down the highway…but since we’re locked down in these isolated times anyway…there’s no reason why you couldn’t strap on the headphones or turn up your stereo and dig into the unique set of stories & songs Turfseer has been making.  And now that the trilogy has officially wrapped…he can set his mind free to other exciting projects and kick the Covid thoughts outta there unless they wanna start paying him rent for their stay.

“We’ve gone too far, we’re in too deep/Our isolation’s now complete/Free at last within our core/Quoth the Statue: Nevermore!”  That’s the final line of this Turfseer trilogy…and honestly, it might be my favorite one of the entire lot if I’m being truthful with ya.  The reason being…well…probably a little confirmation bias, and a pinch of interpretation…but to me, I felt like this was the kind of strong closing line that helps narrow the gaps between us…maybe gives us a place to start the conversation, despite how final and conclusive it really is.  Because I look at that line…and I have been, believe me…I stare at these words for quite some time trying to piece together whatever I can…but I look at that line and I think to myself…you know – he ain’t wrong about that.  I think the first three parts of that final verse in particular, are ones that all make sense to both the song, and to how we might feel on either side of the fence…and I felt like the final part, the main riff on “The Raven” and switching that always to “The Statue” in this song, was brilliant.  It gives “Nevermore” an entirely different political dimension that works extremely cleverly…and it opens the door to just about a million new interpretations of what that line could mean overall, which I love.  Like I’ve been sayin’ from the start…Turfseer’s unique, no doubt about it; the craft in his words is a consistent source of high-quality tales put forth in thought-provoking lyricism.

Listen to more music by Turfseer at the official page at Spotify:  https://open.spotify.com/artist/4Dt7GYIfuKySG0bQ66dTle