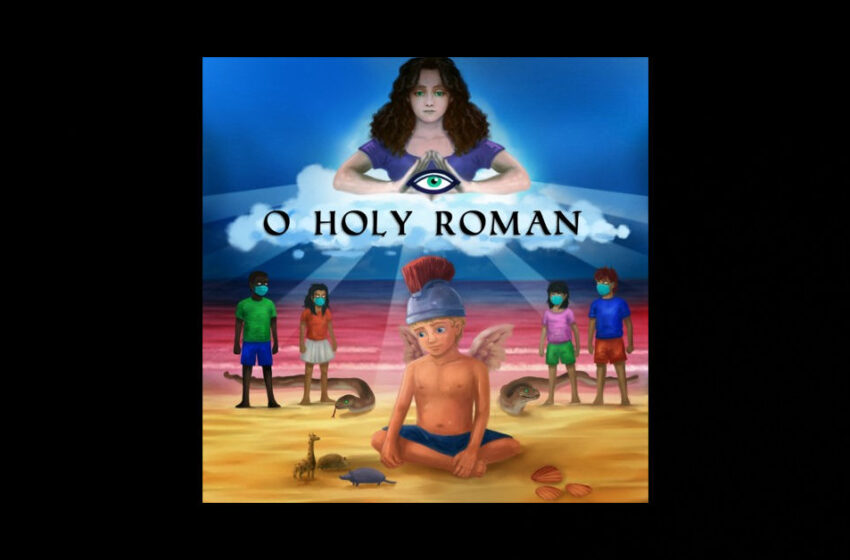 If the not-so-subtle artwork that comes along with this single doesn’t cue you in to what you’re about to experience with “O Holy Roman” on its own, here are some words from Turfseer direct that’ll tell you what the premise behind this song is.  “A child represents the symbol of freedom in the face of all those who advocate the current draconian policies of isolation, censorship and useless rituals including mask-wearing and social distancing, in response to an illusory pandemic.”  His words folks, not mine.

For an “illusory pandemic,” I can wholeheartedly say that no one has made the experience more real than Turfseer has this year, whether that’s intended or not I honestly don’t know; but there’s no doubt that the Covid-19 era has dominated his thoughts, creative process, and themes in his music after what we’ve heard from him in 2020.  Songs like “The Virus Is My God,” “The Ballad Of Typhoid Mary,” and “Nevermore” that we’ve reviewed here in the past have all spoken on behalf of his perspective on the climate of the current day & age through impressively written compositions that dive deep into parables & metaphors that combine the past & the present in a sincere effort to communicate the way he sees things going in the future, based on what he perceives as really happening today.  While I’ve never outright said he’s wrong in his thinking, I’ve respectfully disagreed with the majority of the perspectives put forth and never had a problem saying so in print here on our pages – and at the same time, I’ve still gone to bat many times on Turfseer’s behalf…because at the end of the day, he’s a highly capable songwriter.  I look at it this way…generally-speaking, he’s expressing the view of the minority when it comes to issues of the current pandemic – but like any time that any of us find ourselves on that side of the argument, sometimes the only option is to shout out your opinion as loud, as far, and as fast as it’ll carry.  That’s what four singles of pandemic-focused releases would be for any artist – that’s the shouting…it’s the act of relentless creation until the point is truly made; & they simply want to be heard.  And believe it or not, I fully understand that & why it would be the case…doesn’t matter if I agree or not.

Once again assembling a team of all-stars from throughout the internet to bring the music & words he’s written into existence for us to hear, again, credit where credit is due – I can’t think of anything I’d change when it comes to “O Holy Roman” from the cleverness of the story it tells or the melody in the music or vocals…it’s all extremely well executed and actually quite ambitious in composition & structure.

There are things that I really love…like I think the tone in the guitar at the solo spot heading towards the third minute is spectacular, I like the mix of bold drama & sweet melody the piano is capable of, and in particular when it comes to “O Holy Roman,” I think the lead vocals came out in perfect character to really suit the story that Turfseer’s spinning here.  Sung with a smart fusion of fragility & awe, and what I’d suspect is a healthy dose of understated sarcasm, you have to read between the lines a little bit, but you’ll get where he stands: “O Holy Roman/The questions you ask/The rest of the children, they put on their masks/Alone in your sandbox, a head of your class/Yes freedom is something that will always last.”  While there are certainly lines that you’ll find makes the point of view more obvious than the ambiguity others will…personally I think that plays to his advantage; I think people listening will have to dig a bit deeper this time around on “O Holy Roman” to fully grasp what Turfseer is saying as opposed to the more direct ways he’s put his opinion forth in the past through singles we’ve listened to.  As to whether that’s on purpose or not, I don’t know – and whether that’s the satisfying result of what he’s looking for in writing this song…well, I don’t know that either; all I’m saying is that it would likely take at least a listen or two to fully discern what’s being said in the message of “O Holy Roman,” but personally I think that more of an interpretive value to be found in listening to a song is always a good thing.  Where I see the more general confusion coming in would likely be in assigning this song some sort of genre or box to try to fit into…because that’s a tough call.  Right now at Soundcloud for instance, it’s labeled as Pop – and fundamentally, there’s an argument to be made for that perhaps…but a thin one; sound-wise, this doesn’t quite move Turfseer any further away from the theatrical & dramatic inclinations we’ve experienced in some of the past tunes that have the songs sounding like they could belong to a musical.  Again, this doesn’t have to be a bad thing at all – it really just depends on what you’re going for, and that’s where knowing what Turfseer has set out to achieve plays a role…conversations I’ve had with him in the past have indicated he’s not necessarily looking for that theatrical style to be the main take away, but when it’s there it’s there, and I just call it like I hear it like I always do.  That being said…embrace it brother, it’s clearly working really well.

I like to think that in this upside down world of ours, that it’s artists like Turfseer that allow me the opportunity to get a glimpse of life outside of the bubble I so proudly keep myself within – and perhaps vice-versa even.  We converse, civilly, without issues; I don’t know if I’ve said anything that’s made an impact on him, or if I ever will – but we do seem to respect each other’s authentic sincerity in doing what we think is right.  Because at the core of ALL of these pandemic-tunes, that’s really what this is all about – Turfseer is doing his best to draw attention to what he believes is a five-alarm fire warning & important for you to understand in order for you to protect your own rights & freedoms…and I think we all have to recognize that ultimately, that comes from a very good place inside him, filled with genuinely altruistic purpose.  I like the tension “O Holy Roman” possesses beyond the angelic & delicate melody it displays so perfectly, the tightness of the band is spot-on…and the contrast of cleverness to the words and childlike-wonder expressed throughout the theme & vocals is all highly effective.  Like I’ve been saying, I really can’t think of or hear anything I’d remotely change…it’s largely once again up to personal taste and quite likely, the political side of the fence you’re on.  I think the “illusory pandemic” is real, so what do I know anyway?

I like to think I’m objective enough to always listen, and strong enough to express my opinion when it’s warranted…that’s pretty much why I got into reviewing music some twenty-odd years ago now.  When it comes to the music being made by Turfseer, he makes me think about & consider his words far more than the vast majority of what’s out there right now…and quite honestly, I’m endlessly thankful for that.  I’ll always go right to the front lines of battle with an artist or writer with the courage to stand up for what they believe in, and Turfseer’s literally been doing that all year long as far as I know, and likely much longer.  Nothing not to be proud of when it comes to the execution of “O Holy Roman” and the stunningly ambitious design of this structure…it’s got a heavenly sound to it all, but as always, Turfseer sends you crashing right back to reality with a thought-provoking mix of lyricism relevant for right now.