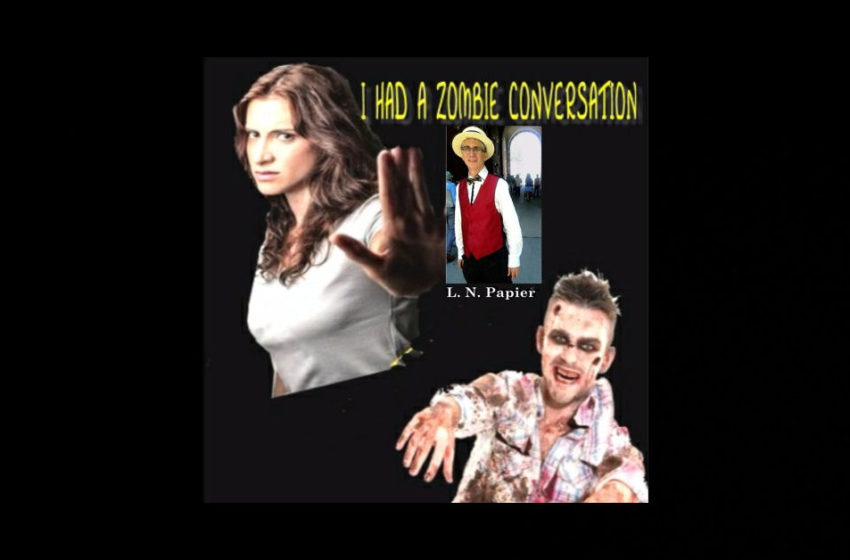 Turfseer – “I Had A Zombie Conversation” – Single Review

When it comes to the art of making music, a hook doesn’t always need to be universally loved in order for it to be successful.  In fact, if you go through the history of it all, you’ll find numerous examples of songs that dominated charts all over the globe that maybe might not have been your own personal favorites, but you certainly remember them – and likely because the hooks were essentially bulletproof.

There’s a chance that’s gonna be the case when it comes to how people hear Turfseer’s “I Had A Zombie Conversation,” the title-track of a 2020 record recently released.  Without question, it’s got a much different style, sound, theme, and vibe than what we’d just experienced with reviewing the single “The Virus Is My God” a couple weeks back – Turfseer has created a zombie-esque love-song of sorts this time around.  The results are quite different for certain, which is somewhat to be expected with Turfseer being the main composer/lyricist and then reaching out across the internet for guest-stars to sing & play with him – & the uniqueness in his material will always vary to a large degree as a result of that method.  That’s the reality…and as far as I’ve ever been able to tell, no artist has been able to find a way around it.  But in this particular case with Turfseer’s music, I’d also be willing to bet that’s all part of the grand design and completely intentional – branching our art & music out to include what other artists can bring to what we create continually expands our own horizons; it makes each experience remarkably different than the last & the value in that alone, is immeasurable, always.  Check out the video below!

Lots of positives here for sure, and ultimately, I’ll prove to ya that this is another solid example of highly effective songwriting in action by the end of this review.  The music to “I Had A Zombie Conversation” has an excellent playful bounce to it…you can tell it’s a song that’s designed for entertainment, and it’s played with performance in mind.  Lewis Papier, the mastermind behind Turfseer, takes control of the vocals on this cut for the lead role, and he’s got great tone throughout this entire tune; the falsetto moments and harmonies he shares with Greg Schlotthaeur are continual highlights throughout this new single.  Where this song displays even more strength is through the guitars added in by featured guest Jon Statham – the textural tones he plays with will knock your freakin’ socks off and his contributions to the vibe of “I Had A Zombie Conversation” are completely essential.  The video supporting the latest single by Turfseer is also a huge asset to this song overall – these are perfect visuals to suit it; haunting, eerie, surreal – I loved everything I saw right down to the effects in transition and the border edges too.  More than anything else perhaps, like I’ve been explaining slowly from moment one here, is the fact that the hooks of “I Had A Zombie Conversation” will stick with ya for a very long time after it’s all over.  No matter what the court of public opinion might ever be, pass or fail, it really doesn’t matter when it comes to the inherent value of a memorable moment in music…one way or the other, you’ll remember this song for sure.

My main and only real concern would be this…and keep in mind, I’m actually about to support the case for this being an extremely well-written song in the process…but this is something to genuinely consider.  Here’s a quote direct from Turfseer regarding “I Had A Zombie Conversation” that’ll clue you in to what this song is REALLY all about:  “A Zombie Conversation is a failed strategy employed by guys trying to get a girl. The conversation takes the form of rapid fire questions (aka “the third degree”) which most women find unappealing.”  You can visually see the risk being taken here before you even hear it.

Writing about a potentially unappealing subject is always going to come with risk – presumably, what’s being written about is as promised…and…considering the amount of options that there are in the world when it comes to what you can listen to…like I said, there’s undeniable risk in writing about what others wouldn’t, or a topic that deals directly with something off-putting.  Where it gets trickier is on a lyrical level; on one hand, in comparison to a song that we know like “The Virus Is My God,” there is undeniably less here for the brain to chew on – but when you’re considering the metaphorical aspect of zombies being the ones chewing on brains to begin with – that’s when you realize that the much more simplified lyrical expression in this song is actually right on-point.  Think of every zombie movie you’ve ever seen in your life…with the exception of maybe one or two I can think of, the speech patterns & capabilities that zombies have is…well, let’s just say a little limited.  Then consider the quote from above once again, what this song is all metaphorically referencing, and factor in just how many zombie conversations you’ve likely experienced yourself in this lifetime!  With its quick-to-the-point phrasing and imagery, “I Had A Zombie Conversation” reflects this all perfectly – and that’s kinda where you have to realize the genius of the songwriting & craft, regardless of how you may/may not feel about how this single sounds in the end.  At over six-minutes in length, Turfseer travels a mile to make the overall point, but in the process, even with such short lines in rapid succession, eventually fills in the details we’re all looking for.  The bottom line, is that the music/vocals on “I Had A Zombie Conversation” come out much more lively than the lyrics do, which as far as I can tell, would be the complete intention of its design – there’s risk in that approach for sure…and perhaps Turfseer might have done TOO good of a job here in that sense – but at the end of the day, you can’t argue against the cleverness of the writing, or the execution.

Find more music by Turfseer at the official page at Soundcloud here:  https://soundcloud.com/turfseer

Tags: I Had A Zombie Conversation Singles sleepingbagstudios Turfseer