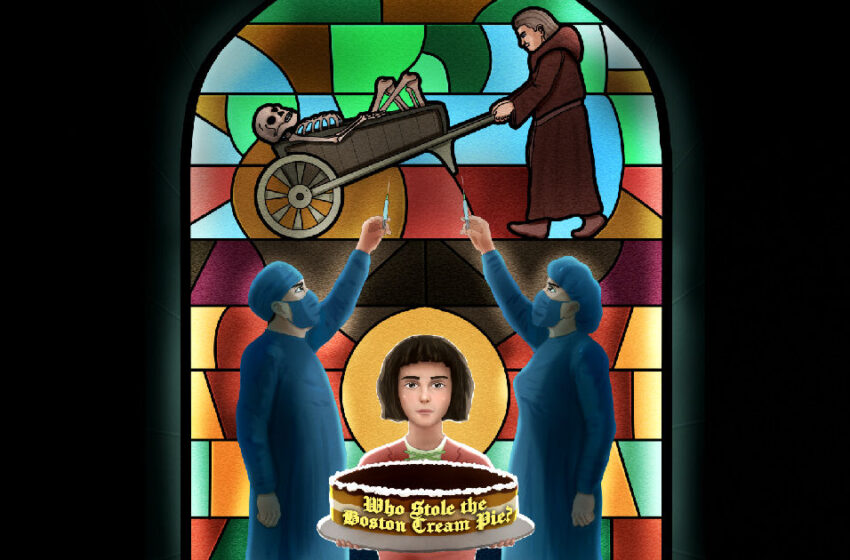 Alrighty Turfseer…nice to hear ya on a roll there friend.

Many things became much more clear to me in reviewing this songwriter’s latest tune…some of which I’d suspected & maybe might have passed in the information I’ve been scanning over time, but put to me much more concretely this time around.  For one, Turfseer has indeed been working hard on putting together a full-scale musical to support this string of pandemic-themed songs he’s been releasing…and rumor has it right now that it’ll possibly be called Days Of No Immunity, or perhaps This Is Your Life Jonas Salk.  Even that fact alone brings a greater purpose & merit to this series Turfseer’s created overall in my opinion – and he’s served up another clever piece of writing with this single “Who Stole The Boston Cream Pie?” to add even more sustenance to the growing lineup of songs.  Enlisting the assistance of a group from Greece going by the name of Deadfile – together they’ve collaborated in a medieval-type sound & setting to weave a tale of the effects of social compliance, greed, gluttony, and the role we personally play in the relationship between these things.  At the heart of it all, Turfseer is questioning the supposed wisdom of the medical community and their perceived authoritative stance on being the end-all-be-all of what’s right & what’s wrong – which are themes that runs deep through this series intended for this musical he’s creating – and he’s done another solid job on presenting his case through his own genuinely unique perspective once again with “Who Stole The Boston Cream Pie?”

I’m of course not here to argue that a medieval style of sound is likely gonna find itself back up at the top of the mainstream…but as I’ve already pointed out in explaining these songs are all a part of an even bigger ambition in creating Turfseer’s musical, it’s simply more confirmation that music can be many things and certainly many wonderful things well outside of the radio airwaves & top-40 content.  You gotta recognize that, while it is a much more niche sound in terms of what the masses tend to listen to – the fact that there really isn’t too much stuff out there being made like what Turfseer tends to put out there eventually stacks up to one supremely loyal audience that is geared to expect & seek out something different from the music they listen to.  And I’ve got plenty of respect for that – I definitely don’t need everything I hear to sound like it was built & designed for radio – I just wanna hear passion, musicianship, songwriting, and respect for the art of music itself in just about every case or record that comes my way – and you’ll always find plenty of that involved in the music Turfseer’s been putting out.  He also seems to have a knack for finding the right artists to assist him in bringing these tunes to life – I’ve had the privilege of being able to take a peek behind the scenes to hear the early demo version of “Who Stole The Boston Cream Pie?” to get a full glimpse of the extraordinary transitions this song has made to become the version it is now.  Really cool to be able to get that extra perspective into the process and hear how a song like this evolves into what it is now – the blueprint was always there from day one, but credit to this Deadfile ensemble of players for maximizing the potential of the songwriting.

While there’s almost no argument to be made against this being perhaps the most allegorical song I’ve heard in the set of pandemic-related tunes by Turfseer so far, I also think there’s an advantage in that respect that also broadens the audience by proxy.  I suppose what I’m saying is, within the context of the music he’s been putting out there lately, I think dedicated fans would know what he’s getting at here in what seems like a tale of a lady helping herself to a good ol’ Boston Cream Pie – but for the vast majority out there, there’s a good chance that standing on its own, this single might seem to many like the surface-level imagery of the story is what it’s all about without digging a little deeper into it & the surrounding set of tunes being made by Turfseer.  Again, this doesn’t have to be a bad thing at all – in fact it can be a really good thing in many ways – and in the context of an entire play, or any play/musical you can think of for that matter, it’s not as if you’re always beaten over the head with obviousness constantly, know what I mean?  Sometimes you have to dig a little deeper for the meaning, do a bit of research yourself, or connect the dots in your own mind as you listen to music and a catalog of songs from any artist or band out there – I think that’s one of the many aspects of what makes Turfseer’s tunes highly interesting to me…to see/hear how it all connects.  My point is that, it’s in knowing his music fairly well that I can likely pick up on a lot more of what Turfseer’s really laying down here, you dig?  There is a story here, and it’s definitely one that people can follow – it’s just a matter of how closely they’re listening & what they pull out of it in the process…interpretations may vary, but in the end, that degree of ambiguity left to our imagination to fill in the blanks is a very good thing.  It leads to conversation, debate, and discussion – all things I’d have to fully believe that Turfseer welcomes & invites, based on his material.

Beyond all that though, I think he’s really found his way into a no-lose situation with “Who Stole The Boston Cream Pie?” – and I’ll tell ya why that is.  Even in knowing where he’s going with the perspective put forth throughout the poetic narrative he’s put together in the words of this single, even I found myself separating from that at times just to enjoy the imagery & details of this song as it’s displayed – you know, as in, without trying to spend too much time thinking about the deeper meanings involved.  I kept feeling like it was equally enjoyable in that sense…much like the last single we reviewed from Turfseer, it’s another story extremely well told, with plenty of lyrical content to keep your wheels turning, but this is also a whole array of instrumentation and smart choices being made in the writing to keep us entertained in a variety of highly effective ways.  I like the back-and-forth way this tale is told, I love that there is always multiple ways you can examine the music of Turfseer, and I’ve got massive respect for any artist out there willing to take on a task as monumental as creating an entire musical for sure.  Dude’s got his heart in the art, a passionate connection with the craft, he’s fueled by a greater purpose when it comes to his desire to express & communicate his point of view, and he’s got the courage/integrity to stand up for his convictions on a whole bunch of issues that affect us all right now.

Perhaps more understated in all of these assessments on his music coming from all over the globe in addition to the ones I’ve personally written here myself, is the fact that Turfseer more than often reaches back into the past for the inspiration & sounds he chooses to reveal the madness of the present – it gives just about everything he’s doing lately a historical tie-in that’s every bit as much of a flashing red warning sign for the times we’re in living in now, and it continues to be a remarkable part of his music.  No complaints from me about “Who Stole The Boston Cream Pie?” – I think it’s a fully engaging tale, I think the execution is stellar once again; the drama in the piano & grace in the vocal melodies is spectacular, Deadfile en masse are nothing but impressive from the start to the finish, and all-in-all, the uniqueness of Turfseer’s music has really been coming alive as of late.  He’s got another great single here that stands out, and another really strong piece to contribute to his upcoming musical for sure.

Find more music by Turfseer at his official page at Soundcloud here:  https://soundcloud.com/turfseer