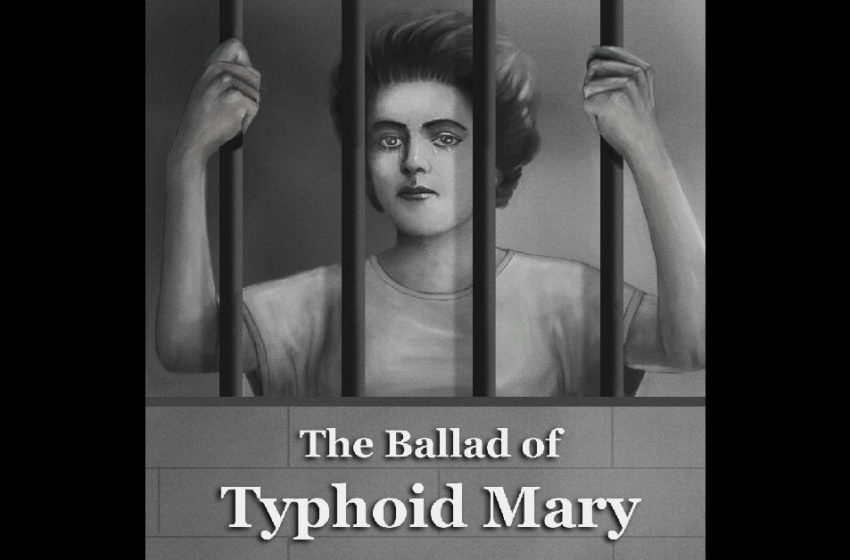 At its core, with the new single “The Ballad Of Typhoid Mary” being so close thematically to the recent release of “The Virus Is My God,” you have to somewhat assume that Turfseer might be workin’ his way towards a concept album of sorts, or a new play to enact these songs dramatically…or that at the very least, this current pandemic situation is bringing out his creativity in a stream of connected tunes.  Mind you, he’s got a ton of’em out there online that trace back much further than I’ve personally been listening – but recently, from what I’ve heard coming through these speakers, Turfseer has sure been fixated.  What makes his brand of Folk always worth a listen is the fact that he’s never limited to one specific approach; case in point – even though you’ll find the root of songs like “The Ballad Of Typhoid Mary” and “The Virus Is My God” explore similar perspectives, but they’re also told through completely different tales in unique styles of their own.  So sure, there are similarities you’ll find between the two songs if you’re paying close attention, but in that same respect, you’ll find that each of these recent singles by Turfseer offer something entirely separate of their own that make them each compelling.

Because ultimately, that IS what these singles are, truly – compelling.  Much like with my review of “The Virus Is My God” – I’m not going to bat on behalf of what “The Ballad Of Typhoid Mary” and its overall message is – but I do recognize a great story when I hear one, and I’m always willing to listen.  In many ways, that’s the heart of what this song is really about…information…how we obtain it, how we perceive it, and what we choose to do with it…for better, or worse.  So it’s in saying all that dear readers, dear friends, that I remind y’all to keep an open mind when you’re listening to those playlists of yours; songs like “The Ballad Of Typhoid Mary” are designed to be thought-provoking & polarizing, just as much as they are to be entertaining.  Turfseer is clearly not one to shy away from using his platform to get the people out there to think through the music he’s making – and lyrically, there’s zero doubt about his ability to craft a story.  Again, much like with “The Virus Is My God,” I felt like “The Ballad Of Typhoid Mary” really hit a home run in that respect with the amount of clarity in the details & imagery you’ll find – essentially, if you were to come outta this tune and not ‘get it’ by the end, you need another listen.

However…as much as a great set of lyrics can be an asset, they can generate a complexity that can be difficult to overcome.  Complications can exist if collaborations are inflexible; and while I’m not necessarily saying that’s the case here, let me explain…  Turfseer’s a songwriter and a lyricist at heart, in addition to multiple other hats he wears in the musical-realm – but when it comes right down to it, from what I can tell, in my opinion, the man is all about the words.  And like I said from the get-go in listening to this guy’s music, that’s a huge advantage his songs have over so many others – the details.  In handing over the material to other artists, he’s always going to get different sounds with the unique talents that each singer or guest might bring…but that can also be a solid route to successful results as well.  Where I felt like “The Ballad Of Typhoid Mary” might have struggled a little is in trying to find that bridge between the songwriter & performer, if I’m being truthful.  I felt like there are times where you can feel that difficulty to find the metering for the amount of words & details there were along the way.  It’s a double-edged sword you see…it’s important for Turfseer to say exactly what he wants to say, exactly how he wants it all said – but when it comes time to perform those words, that flexibility in collaboration needs to exist…some lyrics may need to change in order for a singer to be able to deliver their absolute best to the flow of the melody & design.  And I’ll be honest with ya – it is a really tough thing to keep in mind when putting pen to paper and having someone else sing the material in the end; I wouldn’t fault Turfseer in that respect so much as it’s advice to consider in the future.  Not every guest-star or singer might even tell ya if there’s a potential hiccup or a roadblock to a completely confident performance…which is where the role of being the head-honcho is important.  Turfseer is no stranger to music whatsoever…and those moments where things could go smoother, well…that’s the reality – they could go smoother – but that’s his call to make at the end of the day and it’s a hard one, make no mistake.  For a writer to potentially compromise their words, or have to shuffle one line even, can often lead to a complete rewrite, or at the very least hold up the process in the search for lyrics that preserve the meaning – and it’s absolutely less than ideal in the pursuit of saying what you want to say by design.  But if that’s what needs to be done in the name of accessibility and getting your music out there to the masses…then buckle-up partners, because you’re all in for many long nights – that’s how music works.  Somewhere lies the balance between what the singer needs to sing, and what the words need to say – I’m never one to lie to ya & say that’s an easy thing to achieve in a collaboration, because it’s not.

I don’t want anyone to get me wrong though, these are just observations, opinions, and thoughts I’ve got as I’m listening and I don’t ever claim to be the end-all & be-all of music-reviewers; I just hear what I hear.  For the vast majority of this tune, I think it’s remarkably well-done – and if I’m being entirely truthful, I think singer Diego Yakich does the best he can to navigate the complexity that exists in attempting to bring this tale to life with a performance that’s laden with bold tones & genuine character.  Coupled with the fantastic backup vocals from Hana, they do make the most of this story through a passionate collaboration that certainly works – they sound absolutely excellent when they’re singing together.  Diego’s also responsible for the music you’ll hear from the harmonica to the guitar solos – and all-in-all, though it’s clearly a mouthful to get all the details across in this song, I felt like he did a very commendable job in what’s truly a difficult task.  Perhaps most importantly, they completely stuck the last line as precisely as you could possibly hope for in what’s arguably the most crucial line in making this whole tale complete & leave you with a haunting conclusion that you’ll certainly remember.

Turfseer excels at creating songs you can visually see in your mind through the imagery he provides – and for myself personally, I highly enjoy the fact that there is so much art in the lyrics he designs.  Every time I’ve had the chance to listen to his music, he’s told me an incredible tale full of vivid details in his words, and kept me entirely engaged with each experience through the age-old art of real storytelling.  Your ears will appreciate the depth in the characters he creates, the stunning plotlines he comes up with, the parallels between what he’s writing about and how they’re set in the past but completely apply to our present…he does an excellent job of giving our brains a ton to chew on while we listen.

You could argue these are essential staples of great Folk music and you’d get no argument back from me; Turfseer has a lot of amazing ideas and a radiant passion for the pen, and it always seems to lead to a tale worth being told, every time.  He makes me think while he keeps my ears entertained, and I’m always going to have a lot of respect for that; there is indisputable character, conviction, & commitment in Turfseer’s songs – the appeal of his ability to write & communicate should never be underestimated.

Find more music by Turfseer at his official page at Soundcloud here:  https://soundcloud.com/turfseer