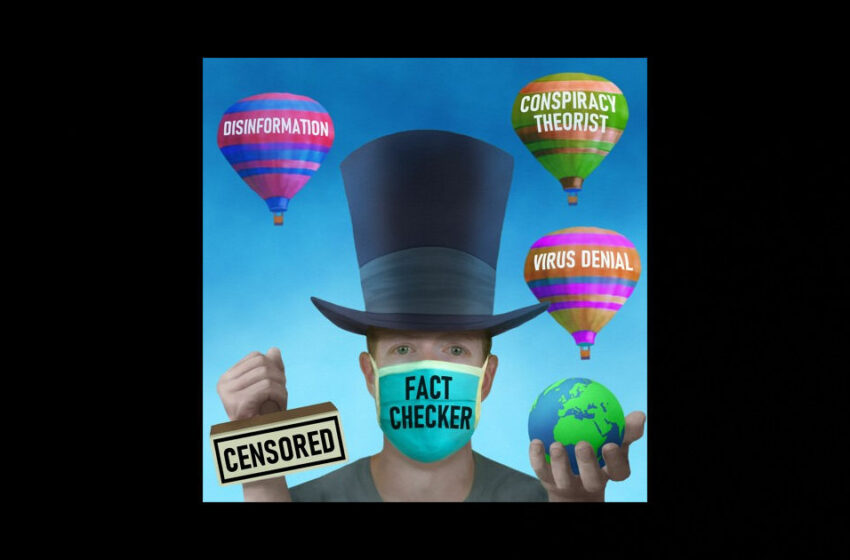 Chances are, this is a name you regular readers of our pages are plenty familiar with, especially when it comes to this year and the sheer dedication that this songwriter has been applying to his craft.  If we’re talking about the production of tunes and output of creativity when it comes to 2020 – you’ve gotta have Turfseer up at the top of your list for the most active, without question.  Quite often inspired by the current social conditions & hotly debated issues of the present day, Turfseer has never been one to shy away from potentially polarizing ideas; in fact, you’d likely argue he’s more than willing to put them out there for you all to discuss.  A highly respectable writer with a point of view & a perspective, he’s been working hard on a musical that encompasses so much of what we’ve all been going through over the course of this year, and I’d assume that this single “Fact Checker” will fit right in on the fringe of it.

Whereas many of the songs we’ve experienced from him here at this site so far have reflected on his views towards the pandemic, and more specifically the handling of said pandemic, Turfseer sets his sights on a different but well-worthy target this time around on “Fact Checker.”  And while we’ve openly debated many things about the subjects, themes, and concepts in the songs we’ve been exposed to – what also made this particular experience more unique from the past reviews, is that I felt like both Turfseer and I fundamentally agree on the core issues he’s putting forth on this new single.  Chances are, we might come at it all from different sides of the coin…but that’s okay…I’m happy to meet anyone in the middle when it’s possible – and in listening to “Fact Checker,” I realized we do have many things in common when it comes to how we view information itself, the importance of it & where it comes from, and the almighty right to freedom of speech.  Well…I suppose that’s not entirely fair; I’ve always known this about Turfseer & I’m sure vice versa – what I’m saying is that “Fact Checker” confirmed this even more.  Because make no mistake folks…I might not refer to them as the Illuminati or whatever the heck, but I definitely do believe there are people out there actively attempting to thwart the freedom of speech & blur the lines between fact & fiction each and every single day, as sure as you and I are living & breathing.  There are even arbiters of society that have the sheer gall to believe they can assess what access we should have, to what types of information we should get, or what we as individuals can say – the quintessential “Fact Checker” out there in the modern world…and they come in many forms.  I’m not talking about lizard people or anything nearly as crazy as that – in fact, I’d say the artwork from Schotter that comes along with this Turfseer single points out a great example as clear as day of one of the main culprits on social-media that we’re talking about in many instances…but make no mistake, you keyboard warriors aren’t off the hook here either.  From online Karens & Kevins trying to induce cancel culture, to the legislators & lobbyists behind the scenes in the government doing their damnedest to limit what we’re able to say…to me, it’s absolutely all crazy, complete BS, and arbitrary at best…but there also seems to be little to no pushback on such an enormous issue that literally affects us all.  There is some, but there should be outrageous outcry from every one of us any time our speech is threatened – bar none, I say.  I’m obviously not personally for hate-speech or any of that kind of incendiary crap & wouldn’t stand for it – but I’m never gonna be the person to say you wouldn’t have the right to say whatever it is you believe in either.  I’m all about making your case – if it’s that good & airtight & provable, then bring it on & be proud of it – I might not always agree with the content, but I’ll be right there on the frontlines defending your right to say it.

“Fact Checker” is very astute in its observations about much of what I’m talking about here, pointing out what’s important through a storyline that shows the effects of what happens in a society always so ready, willing, and able to point the finger – & usually the middle one at that.  You’ll find many lines that relish in a lighthearted sarcasm that suits the vibe of the upbeat demeanor in the music like: “When you get it wrong / I’ll start to sing my song / That you have fallen off the tracks / All of it depends / If you can make amends / Otherwise there’s no turning back.”  There are many clever references to the present-day madness we’re all experiencing collectively, as you’ll find in most Turfseer tunes that I know of; but that one really resonated with me perhaps more-so than any other.  I’m as conflicted as it gets when it comes to the core concept of whether or not a person really can change in this lifetime…but I do fully believe that everyone should have the option if we’ve all genuinely got the ability, as is often claimed.  As in, I understand why people get bent out of shape when debating issues back & forth & whatnot – we’re passionate beings that believe in things, and that’s a natural side-effect of that – but the idea of cancelling out a person on this earth and somehow deeming them beyond some kind of redemption is straight-up crazy as crazy can be to me.  I’m not talking God-stuff…if that’s your jam then all the power to ya & no judgment here – I’m just talking redemption in whatever form we should all be entitled to – and don’t get it twisted, that’s exactly what I mean – we should be, as human beings, entitled to the opportunity to change, and obviously quite hopefully, for the better.  The “Fact Checker” gets in the way of healthy debate, discussion, information itself – and ultimately decides what you, I, or anyone else out there, can “handle” – and I just feel like at some point, you really gotta ask yourself if you’re truly okay with that.  I’m not…and I highly suspect Turfseer isn’t either…and I believe we’re as united & aligned in the core messages of what a song like this stands for as can be really…I knew we’d find more in common between us one day & here we are!  Drop the balloons, I say!

Music reviews…art reviews…opinions & all that…they can be, and should be about many things.  For myself personally, a lot of the times it really comes down to one major factor – does or does-not the music inspire the words to come out?  Sure I could get technical and tell ya that the enlisted talents of Day1994 (Lead Vocals and Harmonies), janelevkovskaya (Piano), Scotty_Wilson (Backup Harmonies), Leonvagemond (Harmonica), and Deadfile (Bass, Drums, Guitar, Synth, Mixing) all came out to play with passion & contribute their own strengths musically to a song that comes readily equipped with a bold idea – freedom of speech gives us the ability to write & talk about whatever we choose to; so you can imagine how important I consider it to be when it comes to defending it.  Because yes, I can cite details I love like how the harmonica in “Fact Checker” is downright essential listening your ears gotta hear, or how the piano/synths do an exceptional job of filling the atmosphere with a playful spark to match the mischievous nature of Turfseer’s writing, or the lyrics themselves – I can do all that & more – but to me, from my perspective, what could be a better or more naturally sincere way to approach a review than to simply allow what comes out to come out, inspired directly by the music, words, and performances we hear?  Isn’t that the real compliment?  Somebody fact-check me on this!  Because I tell ya folks…I might ramble a little bit of course, but that doesn’t stop me from feeling a certain level of pride when I can visually see just how much the music I’m listening to inspires me to write about it.  Don’t get me wrong, sometimes everything that needs to be said can definitely be said within a short amount of space too…I’ve just always believed that music deserves more…your efforts as artists, and in bands…that deserves more from us journalist-types & it has for quite some time, especially the independent scene…and hey, I don’t have a “Fact Checker” standing over me or breathing down my neck while I do what I do.  Freedom of speech baby, yeah!

Turfseer always manages to create thought-provoking tunes…if you’ve been following our saga of reviews on the series of singles he’s been releasing this year, then you’re no stranger to the FACT (Yes!  Fact!) that his music has no trouble whatsoever eliciting a response from yours truly over here.  “Fact Checker” gives you that signature dose of something to consider as only Turfseer can, alongside a spectacularly vibrant collection of instrumentation & talent to support it all…lyrically & musically sound…background vocals are solid, the lead is as well – and perhaps most importantly, the messages come through loud & clear.  Turfseer’s been finding some really excellent players to assist in getting these songs together, and I like that, even in a scenario like this, where obviously the words would be of huge importance to him personally in terms of the finished product, he’s got genuine respect for the players he’s been working with, and he makes sure to make time for the instrumentation to get its own well-deserved moment in the spotlight through vividly colorful solos & expressive musicianship that’s compelling & catches your ears with ease.  His latest singles have really come out with character and interesting ideas that are well thought-out, well-designed, and…well…they never lack personality, perspective, or a point of view now do they?  Check out what Turfseer’s been up to this year…he makes music for your brain to chew on & he never skimps on adding in the entertainment for ya in the process.

Find out more about Turfseer from the official pages below!