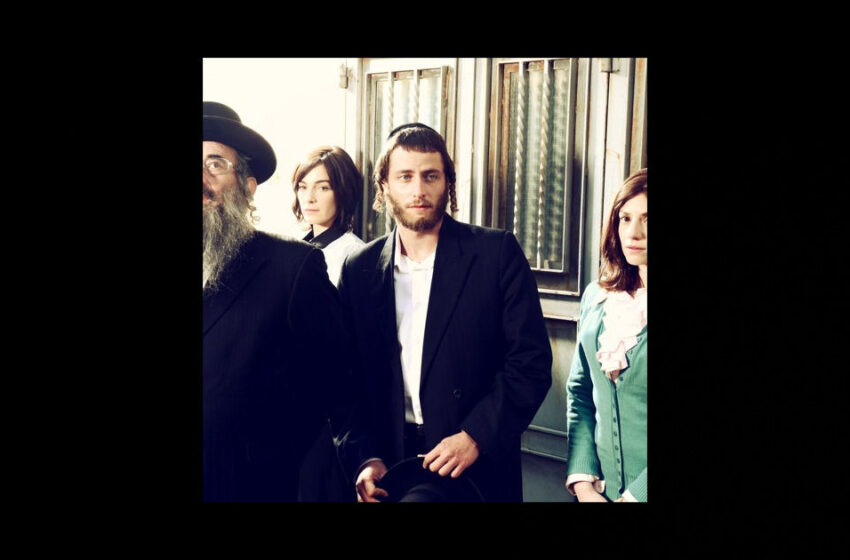 Turfseer’s got me entering an entire world of entertainment here that I didn’t personally know even existed!  According to the legend online & scattered notes I’ve got here on my desk by this dimly lit candle flickering in the wind as I hit the keys on my typewriter machine, “Just Be A Shtisel” is largely based around characters, scenarios, inside jokes, and details from the Israeli television series called Shtisel.  Who knew?  I’m so consistently attached to my speakers & headphones that I rarely take a time-out for a TV show or movie as often as I’d like to.  Word on the street is that Shtisel was originally on the air back in 2013-2015 – and then more recently, the Netflix-effect took hold with its release on the platform, and all of a sudden, the popularity of the show resurged more than ever, leading to direct plans to create a third season for a 2021 comeback.  Considering I didn’t know anything about this at all, not the show, not the actors, not the writers – nothing – all of these details are extremely cool to me in learning about the inspiration behind this Turfseer tune released back in 2019.  It makes me think back to those inspiring moments where fans rally behind what they love, enough to move the seemingly immovable object of a television network, forcing them to grow a heart & see things from our perspective.  There’s no question that so many great shows leave us all too soon…and whether it comes down to sending truckloads of peanuts to a studio like what happened in between season one, the near cancellation of, and season two of Jericho – or simply being patient enough to ride it out & know that at some point in time…in your own very lifetime…everything that was once old, will indeed, be new again.

On the merits of the uniqueness in this idea alone, I found “Just Be A Shtisel” well-worth checking out.  Not knowing just about anything about Jewish culture from its traditions to its own vernacular – there’s a whole gamut of things to be learned in listening to a song such as this one.  Plus, it’s clearly written with having some fun in mind, which I also dig from time to time, but especially in a tributary setting where you can feel that art inspires art, and that certainly seems to be the case of “Just Be A Shtisel.”

What I really enjoy in being so incredibly far removed from a subject, theme, or concept of a song is that it allows for increased objectivity by de facto.  If you are familiar with the show Shtisel, I’d have no doubt whatsoever that you’d get about 100% more out of this song and its insider-references than I personally would – so for those of you that do, the advantage is yours here.  For the rest of us, in a way it’s a very sink-or-swim style of songwriting that Turfseer has employed…you either have that capacity to enjoy learning about something new through the music you listen to, or you don’t – but “Just Be A Shtisel” isn’t going to take a time-out for you to catch up, it’ll just start pumping out the character names & their quirks in detail like you’ve known the story all along.  Again, for some, that’s gonna be quite the journey into a whole world of something they might not have known anything about, like it was for me – for others, it might be a distance too far to travel, and in a song as niche in subject as this is, that’s completely understandable.  We all have what interests us and what doesn’t – for example; I’d way rather listen to a song about an Israeli show I don’t know about than another tune about chicks & cars – perhaps you feel differently, in which I say, to each happily their own & have at’er hoss.  To Turfseer’s credit, he always approaches music from an artistic angle & songwriter’s style…the very idea that this guy would write a song about chicks & cars is LAUGHABLE…he’s makes music for way different reasons than most you’ll find out there, and as a result, there’s quite the magnitude of scope & depth in his material – it definitely ain’t shallow, surface-level stuff, that I can tell ya.  Do I think everyone out there in the world is gonna connect with “Just Be A Shtisel?”  No.  Of course not.  But neither would Turfseer.  You don’t go into such a defined subject in any kind of writing without the full understanding that you’re likely to leave a few people out in the process that have no frame of reference, or the personal interest to gain one for something new…it’s human nature and who the vast majority of us are.  Not being his first rodeo & all, I’m sure that Turfseer knows that “Just Be A Shtisel” appeals to a smaller audience perhaps – but when it comes to a tributary style of song, is there any other option?  That kind of writing always gets pinned to one specific topic, idea, or subject matter by default…but while it might slightly pigeonhole the potential audience, those that ARE in the know, get that much more out of the experience…and at the end of the day, that is who tributary tunes are for.  So I’m cool with it, and hopefully you’ve got yourself an open mind & wanna experience something totally different too – because this is definitely that.  You don’t hear songs like “Just Be A Shtisel” every day.  I might STILL not know much about any of this even now after hearing this song several times – but that’s no fault of Turfseer’s – you can blame my impenetrable skull for that…and my resistance to knowledge.

As far as his poetic introduction to this cast of characters is concerned, I’d assume he’s spot right-on in the details & it’s crystal clear he’s a fan.  Lyrically, I actually felt like this was a lot of fun despite the original show being listed as a Drama…but that’s the experience of real life too, ain’t it?  There’s laughter through the tears, and joy in the serious moments to be had as well.  The bottom line is, what he’s chosen to include in the imagery and the character-traits all seemed like it came from a genuine place of admiration for the original show, and he goes for the tongue-in-cheek humor you’d imagine is a staple feature of Shtisel, even without having seen it.  Alongside the playful bounce of the piano & keyboards, the arrangement by Orion Keyser, and the skillful singing of Greg Schlotthaeur – the vast majority of this cut comes out not just interesting & entertaining, but very well rounded in terms of its ambitious style & the production that comes with it.  Not knowing the show personally like Turfseer does…may be costing me a little when it comes to the chorus of this song…that part I’m unsure of.  The best way I can put it, is to advise you all to listen to these words and even look right at’em on the page online as you listen – this is just about as demanding of a set of lyrics as you’re ever bound to find, in any song out there, period.  For Greg to have handled them throughout the verses as proficiently & professionally as he does, while retaining such a strong performance in the process…believe me folks, that’s no small achievement.  Not only is the word-selection & list of names incredibly unique to this song to begin with, but in many spots you get the true authenticity of the actual dialect coming through, which adds another great layer of detail into what we hear & provides more confirmation of just how far a song like this takes us out of our own world and into Turfseer’s realm of Shtisel-based fun to be had.  If they handed out a prize for verbal Olympians, Greg would have put himself strongly in the running as this song began – and I think you’ll find that, even with all the superhuman demands these words can supply, he rises to the task competently & capably throughout the verses of “Just Be A Shtisel” and puts in a solid performance.

Objectively-speaking…the approach to the chorus either draws on an inside reference from the show, or those complex words of Turfseer finally do start to get the better of Greg a little – and I’m honestly not sure which it is.  Specifically, it’s that second line of the stanza that seems to consistently prove to be more than tough & trips Greg up a bit – “a schlimiel, schlimazel, you should never act that part…” Not so much the words themselves that give him trouble, but the delivery, space, and pace gets affected due to the sheer complexity of simply trying to get these tough words out fully intact as they’re supposed to be.  Greg will catch up & strengthen by the end, but you can hear just how tricky this line would be, even in your mind if you hadn’t heard the song.  I give the guy major credit for getting as far as he did to that point with such remarkable authenticity, pacing, and stellar tone in his voice…it’s the kind of song that’s truly tough to not ‘think’ about how you’re singing & performing it at the same time as actually doing it.  Verbal complexities can definitely be a hard obstacle to overcome – and Turfseer really threw the entire gamut of Jewish characters & cultural references at him on this song – to me, you almost have to look at even the slightest flaw as a big win overall if that’s really all there is to be had.  Which is the case here…one line, big deal.  I’ll admit, it’s something that catches my ear every time I listen to the song – so that is a factor to be considered, in the sense that if I’m hearing that spot as a bit of an awkward fit you can fully assume I’m not alone – but other than that, this tributary track is well intact and on the rails right where it should be.  It would have been extremely tough or nearly impossible for Turfseer to outdo what I felt like was probably the pinnacle highlight in what I’ve personally experienced from his catalog so far with the recent reviewing of his single “I See A Therapist” featuring this same team of musical all-stars in collaboration…but overall, I’ve got no substantial complaints to make against “Just Be A Shtisel” either.  It’s a niche tune for a niche audience, and for the rest of us, it’s a highly adventurous & unique experience all its own…light-hearted…good fun…celebratory-vibes-meets-traditional-roots…great harmonies.  Like I said from the get-go – it’s interesting – and you should want that as a quality in the music you listen to.

Listen to more music by Turfseer at his official page at Soundcloud:  https://soundcloud.com/turfseer