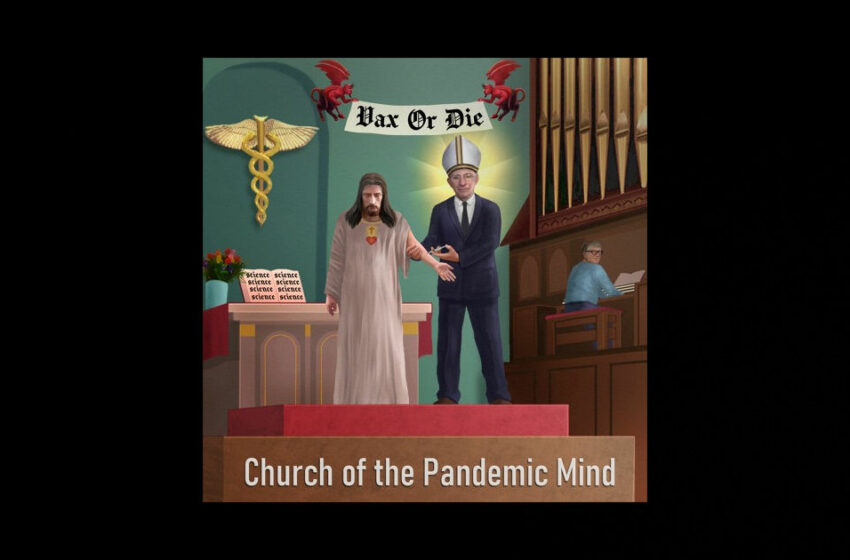 Certainly one of the more fascinating & controversial characters we’ve run into in the music-scene throughout this year – Turfseer has returned with another provocative pandemic tune in his series, called “Church Of The Pandemic Mind.”  It makes me smile when this guy shows back up on our pages and in our speakers.  I’d have to imagine that just about everywhere else Turfseer’s tunes would likely show up in reviews, the subject matter itself would go largely unchallenged and the writers would be far less willing to be adversarial, even when the moment calls for it…I respect the fact that he’s interested in seeing what a different perspective like my own might see or hear in his material, for better, or worse.

With his politics and point of view so vividly on display, from the artwork to the music, to me, it would be a disservice to Turfseer not to dive into a song like this thematically – or the bulk of what he creates for that matter.  Based on previous reviews we’ve published here that delve into similarly rebellious themes that rage against modern-day science and the powers in charge of locking all of us down – he already knows how I would personally view what he’s putting out there lyrically on “Church Of The Pandemic Mind” – he knows that fundamentally, I can’t agree with the message here.  Nothing about that fact makes listening to music any less worthwhile for me personally, nor do I get anything less out of the experience itself – I enjoy things on all kinds of levels; and Turfseer’s proven that many times himself in this year alone.  We don’t see many things from the same side of the coin, and that’s okay – we’ve managed to find common ground through talking tunes on multiple levels, and I certainly respect his commitment to his art, music, and beliefs when it comes right down to it; they might not be ones I share personally, but I value his perspective.  When it comes specifically to “Church Of The Pandemic Mind” we’re talking about a couple of core things at work thematically…references to the current pandemic/lockdown of course, but also commentary on social compliance, religion, the medical community/vaccines…it’s all quite current when you examine the lyricism, reflective of a lot of what’s being discussed out there in the very weeks we’re living in right now.  There’s no real attempt to bridge any sort of gap here…you’ll definitely know which side of the fence that Turfseer views the politics behind the pandemic from…and again, no shame in that whatsoever – no song has any kind of set rules that says it somehow has to meet us in the middle of the road for some weird artistic compromise – you should always make the music you make, how you make it, from your point of view, without apologies.

I think the overall point being made that we’re living in the “Church Of The Pandemic Mind” cuts several ways.  From my own personal perspective, I find the impatience of people at-large absolutely 100% mindblowing – I’ve yet to see any compelling evidence shown to me that would have me believe that the current lockdown measures are meant to last a lifetime, as opposed to being measures applied for a short period of extremely inconvenient time for us all.  And yes, I can certainly understand, respect, and appreciate that not everyone’s going through the same situation under the same equal circumstances – far from it.  From Turfseer’s perspective, the whole shebang is tyranny to the nth degree, we’re being lied to and oppressed and locked in our cages with masks on all of our beautiful faces, and soon enough, maybe even potentially forced to jab ourselves with some kind of unknown government-supplied chemical syrup to avoid getting that sweet-sweet Covid-19 thing some folks believe in, but apparently doesn’t really exist.  And if it does exist, well then it’s just not as harmful as the media wants to claim it is.  Fine.  But then in that case, where’s the line?  If the numbers are so far off – then what’s the acceptable math?  2% of the amount of people that have died reported instead?  Still seems like a lot to me, but okay then.  Now personalize it, with what I’d say is math that’s more than favorable to the other side of the argument – using that 2% instead of the full 100% of whatever the number of illnesses/deaths the media is reporting – which 2% of your own family are you intentionally willing to part with?  These are the kind of questions and things a song like “Church Of The Pandemic Mind” will certainly make you think about, and of course a whole lot more, as per the Turfseer standard.  He’ll put out lines like “but I will never lose my faith/the men in white, will keep me safe” to sarcastically further the point he’s making…and again, I’d have to push back a little conceptually.  While there’s more attention/awareness being placed on medical-science right now in the present-day, the same could be said of almost anything post-internet.  And yes – that’s a flimsy argument not strong enough on its own – but I’d combine that with the fact that, from drinking a can of coke, to putting a combustible fuel into a machine we climb into & hope for the best to & from work, to medicines we receive when we’re young & don’t even know it – faith has been placed in science by each and every one of us on some level, daily, no matter what it is we do, or how we’re doing it.  Unless you’re not reading this right now and you’re out in the woods somewhere…if that’s the case, cool, you’re exempt.  But the rest of us have grown accustomed to conveniences we take for granted without understanding what it is that really brought us to a state of mind where we COULD take these things for granted, which is science.  Medical sciences, social sciences, mathematical sciences, etc. etc., science, science, science.

Like I said, we see things from the opposite sides of the coin…and that’s okay.  I’m never here to make fun of Turfseer or make light of his art in any way, shape or form – quite to the contrary; I think all great art should be challenged.  But I do like to think that the occasional confrontation between us brings a smile to his face like it does with mine.  It’s all in good fun, as serious as the subject matter may be – I enjoy the challenge, and I appreciate songs that make me think – Turfseer is never on short supply when it comes to that; & with being a purposely provocative personality, a real reaction is always warranted.  Look at it from this perspective – it’s the fact that his ideas, themes, lyricism, and imagery are so crystal clear, that songs like “Church Of The Pandemic Mind” give you the full dose of what they’re getting at in one shot…and it’s literally because of that fact, that debate & discussion can actually be had surrounding these polarizing themes in the tunes of Turfseer’s.  Ultimately, it’s one of the best compliments you can get as a songwriter…to have your music heard by others & truly understood – regardless of whether or not an obedient sheep/shmuck like me agrees with it doesn’t matter – knowing your point of view across in a clear way that listeners will potentially connect with, respond to, or in Turfseer’s case – react to – is invaluable.

Arranged by Deadfile, in collaboration with vocalists Scotty Wilson (lead vocals), Georgia Octavia (backup vocals) & David Zeppieri (backup vocals) – together they put in a high-quality performance into the words of Turfseer, bolstering the potential reach through compelling results.  Given that many of these tunes will be considered for the musical that Turfseer’s workin’ on behind the scenes, there’s a theatrical element to many of his songs that is usually a bit tougher for me to get around, but I felt like the fluid melody executed so flawlessly throughout “Church Of The Pandemic Mind” was a really easy listen.  I think the genuinely interesting sound in the mix of tension, drama, and more delicate moments is more than enough to keep listeners engaged from start to finish – and when you factor in the words, of course, there’s even more of an advantage, assuming the people out there are really listening with those ears on their faces.  Maybe you agree, maybe you don’t – maybe it matters, but I bet that it won’t – the facts remain clear: Turfseer’s lyrics are designed to raise eyebrows & provoke discussion, and if he happens to generate a lil’ controversy in the process, I’m sure he’s more than fine with that.  As I’ve pointed out many times and likely in discussing Turfseer’s music as well – it’s indifference you never wanna experience as an artist or band, and this guy always makes that a surefire impossibility for us all.  Again, it’s impossible to argue against the songwriting when the concept is so clearly put forth and able to be understood by all – so that’s another big checkmark in the win column for “Church Of The Pandemic Mind” as well.  The piano is probably my favorite element of the music itself…it’s gorgeously designed melody can make the song angelically sweet or deviously dramatic…and the added background vocals from Georgia & David are an excellent inclusion, almost acting as the devil & the angel upon Scotty’s shoulders as he sings the lead.  Like, if you listened to Queen on the regular back in the day, or hopefully still now, you’d love how the vocals have come out throughout the length of what’s been done on “Church Of The Pandemic Mind.”  Really dig the synth solo around the mid-point in the song too…though I’ll admit, when I spun this song for the first time, I felt like that was just about the last thing I’d expect to have shown up, but at the end of the day, it fit without question & provides a unique moment in the music that stands out.  You’ll hear it show up in the background as well at times, but much more subtly placed…giving the synth a second or two of its own to shine in the spotlight was a solid move & gives “Church Of The Pandemic Mind” a bit more versatility through the vibrant sound in that solo.  Probably gotta tip my hat the strongest in favor of the way Scotty throws himself right into the meaning behind the words and gets the most out of his own performance as a result as my number one highlight in the whole song this time around.   Wilson puts in a gripping turn at the microphone, giving listeners a true ride through the weight of the sentiments expressed from all angles as the lyrics debate the points of the pandemic and its handling out-loud in poetic prayer.  Turfseer & his talented crew of cohorts involved give you plenty to consider in listening to “Church Of The Pandemic Mind,” and make the ride through the complexity of your thoughts & reactions well worth your while in wading through the storm of drama, controversial issues, and stellar performances put in by all hands on deck.