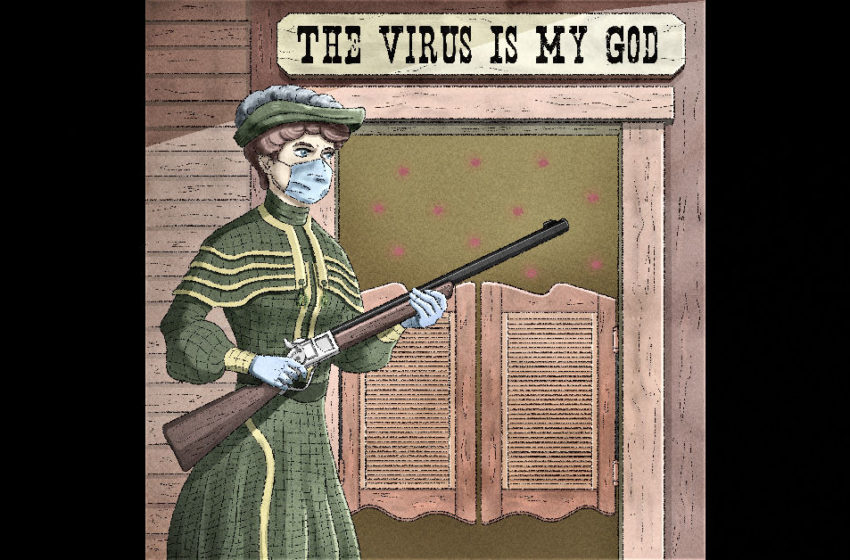 Turfseer – “The Virus Is My God” – Single Review

You gotta love it.  In a time where we’re all collectively looking for answers, Turfseer arrives to make sure you’re asking more questions.  “The Virus Is My God” – a polarizing tune for polarized times.

What I think a ton of people out there will really appreciate about this artist is the craft applied.  There’s no doubt that it’s pretty heady stuff at the end of the day, but Turfseer isn’t making any attempt to hide that, nor would that do a song like “The Virus Is My God” any good in making its point; this is a song for those that question the information they take in…to spell it all out plainly would have been a mistake.

And so, through a twisted parable and tale from the past that echoes the perilous times we’re living in now, Turfseer has instead crafted an interpretive story & song that will have you drawing to your own conclusions & where you stand on the issues he’s raising.  Because believe me…you’ll have an opinion about it, one way or the other…and regardless of whether or not you feel like you identify with or connect to what he’s singing about…either way, you have to admire the fact that Turfseer has written a song that’s damn near guaranteed to get people talking, debating, discussing…and ultimately, that’s the entire point.  It’s beyond entertainment; Turfseer has created a song to make you think.  Personally I dig that…I don’t even need to agree with everything I hear, I simply appreciate the fact that this is the kind of song that listeners could never possibly be indifferent about…there’s tremendous value in that.  I’m always one to encourage debate, and “The Virus Is My God” is definitely the kind of cut that’ll induce it.

Maybe he was born with a gift to stir the pot…

Here’s what I can tell ya for sure…if you like a really well-written and cunningly crafted Folk-song, there’s literally & audibly every reason to love this song.  Again, I’m not saying I necessarily agree with everything I hear in the lyrics – but I’m not saying I don’t either – AND…I’ll take this all a step even further and let you in on a little secret…it’d be tough to pin down Turfseer’s own opinion as well.  What he’s done is truly crafted a tale in the purest sense…characters…storyline…metaphors…it’s truly up to YOU and your own interpretation of the information he’s putting out there to discern exactly what “The Virus Is My God” is saying.  And therein lies the true beauty of it all…we’ll likely all come to our own separate & unique conclusions…no one would really be ‘right’ and no one would really be left ‘wrong.’  Call me crazy but my brain always appreciates a song that gets its wheels turning…and I don’t think there’s anyone out there that could argue against Turfseer’s single being a song that’ll do just that.  I think the lyrics are brilliant, I think the melody is fantastic, the musicianship is commendable, the structure & flow is 100% compelling, and that any set of ears out there that don’t find SOMETHING interesting about a song like this are likely broken altogether, or in need of an intense cleaning.  If there was ever a case to be made for art imitating life…Turfseer has put forth a song that fully reveals just how much these things are entwined – “The Virus Is My God” takes a scathing look at society at its core, and definitely mirrors so much of what we’re all collectively thinking, feeling, and experiencing right now.  And honestly, that’s incredibly rad…given that the tale being told is set so far back in time, Turfseer has cleverly added a whole other dimension to the layers of meaning & depth to this song, reminding us that not only has humanity seen these viral times before…by comparison it shows that we’re in them now, and certainly implies by its very existence that we’ll be in them again in the future.

“The Virus Is My God” and its biggest asset might also be what prevents this song from getting the full credit it’s due.  Lemme explain…

I mean…look…you’re bound to get caught up in the lyricism – and rightly so.  I’d never take that away from being the ultimate appeal to a song like “The Virus Is My God” and the effort that’s been put in here – these are words that deserve to be heard & considered for their highly poetic & crafted design.  That being said, you can get SO wrapped up in Turfseer’s words that it could honestly be easy to overlook or underappreciate just how many other things are going right here as well.  There’s nothing I’d change, nothing I can hear that needs adjusting…I think it’s a golden song from the music to the microphone and everything about “The Virus Is My God” deserves to share equal credit as to why it works overall.  There’s brilliant punch in the melody, accented with smart moves on the piano, excellent harmonica moments, big-big drums, haunting backing vocals, a melodic guitar solo…and hooks that connect…everything stacks up.  If I had to identify what really pulls it all together for me, it’s the tone of voice that singer that Turfseer has chosen to sing this song with…he’s found the perfect dude to make these words he’s written land the way they should…there’s a wisdom in the near-whispers and soft-melody he uses in the verses…like a sincerity that’ll pull you in close like a plead to genuinely consider what’s being said in this story.  “The Virus Is My God” completely keeps you entertained & makes you think…I fail to see or hear what more we could ask for.

Find more music by Turfseer at his page at Soundcloud here:  https://soundcloud.com/turfseer

Tags: Singles sleepingbagstudios The Virus Is My God Turfseer