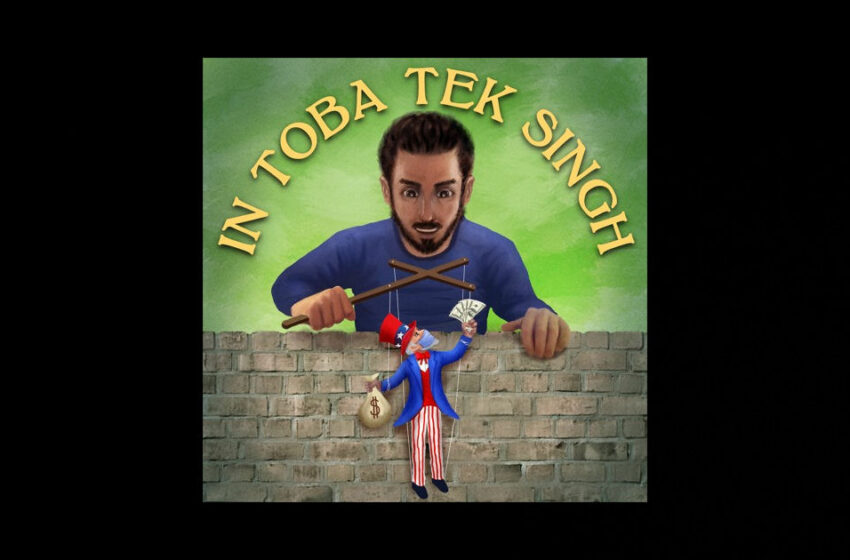 If you have been reading the saga & series of reviews I’ve written on Turfseer’s music throughout this year, you’ve seen a solid back & forth between battling perspectives on the pandemic, but you’ve also heard a whole bunch of songs that incorporate real craft & artistry in the process.  It’s been no secret that I haven’t always agreed with everything that’s thematically involved in the lyricism, but it’s also been no secret that I’ve respected the songwriting & always done my best to see things from his side of the story.  Sometimes we get to just chill out & enjoy a sweet tune like “Just Like 1961,” and we’ve been exposed to a track here & there along the way that isn’t pandemic-related…and I enjoy those moments too of course, though they’re farther & fewer between from my personal experience.  “In Toba Tek Singh” isn’t completely removed from the Covid-induced themes we’ve heard from this songwriter in the past – but…well let’s say it’s socially-distanced itself far enough away from the more direct attacks Turfseer’s launched on the pandemic-era and government overreach in the past – and yes, I dig that.

My point in bringing any of this up in the intro I’m writing here is to simply explain as best I can that, there is music you listen to, and there is music you damn near brace yourself for in knowing that it could potentially be polarizing in some way, shape, or form.  Fundamentally, at my core, I don’t believe it’s the responsibility of the artist to pull punches, so much as it’s on us as listeners to adapt & be ready for it – I do my level best to get to a place where I can be objective & observational in any review that I write, but there’s also no denying the fact that the past always plays a role in the present, no matter how hard we might try to leave it behind.  Pre-conceived notions…assumptions…inherent personal bias…these are all things that can stand in the way of objectivity and taint the ability to examine something even as simple as a song – and ultimately, that’s kinda the whole problem with the world these days ain’t it Turfseer?  I think we could agree on that – and so I’ll take it one step further, and tell the man he’s done a great job on “In Toba Tek Singh” – not because I’ve waving the white flag of surrender, but because he’s earned it.  When a song is right, it’s right – no matter who you are, what style of music you make, or what my own personal taste may be, if you nailed it, you nailed it – and I’d honestly be foolish to claim otherwise.  In my humble opinion, it would damage my credibility in just about every way I can think of – in every case that comes my way, all I can do is be the best version of me I can be & offer ya what insights I can…but they all come from a real place that’s as honest as I know how to be, and hopefully fair across the board.

So yep, as I’ve implied, you certainly won’t find me arguing against what he’s created on “In Toba Tek Singh” – I think this is about as well-crafted as a tale can be told through music.  Not ONLY that – but I think the selection of instrumentation, the melody lines, the vocals…I mean…how can you take points away from something with this much artistic integrity on display?  More importantly, why would you want to?  I don’t invent or invite confrontation where none is required – like I said, when it’s right, it’s right – and that’s the case when it comes to the composition & final results of “In Toba Tek Singh.”  When I say well-crafted, what I mean is exactly that – I’d imagine any set of ears out there would be able to follow along with the storyline in the lyricism and understand it from point-A to point-B without explanation or some liner-notes to help guide you…and if that’s not the indication of well-written lyrics, I’m not sure what else could be.  On its face, of course the song takes place within the setting “In Toba Tek Singh” – but you’ll find everything fits perfectly on a thematic level, with character names representing the culture authentically, and also the wonderfully expressive sounds of instruments like the tabla & sitar in the mix for you on this latest Turfseer tune.  Combined with the beauty of the piano, and the way the vocal flow captures the design of the melody, in addition to how well the singer works with the intended meaning of the words & storyline by adding all the right emphasis & expression to the way he sings it…again, points for an all-around tight song from start to finish.  You could maybe make an argument that there are a few moments that hit that pinnacle of the dude’s register as he sings the most challenging heights of the melody on “In Toba Tek Singh,” but in my opinion, even though it might be by just a fraction of a hair, he always made it to the mark by the end.  And in its own way, I found that actually ended up adding quite a bit to the overall experience really…that tension of wondering whether or not that high-up note would always come out right kept me on the edge of my seat in a weird, likely unintended way, but it’s still kind of a neat feeling you can get from listening to music that’s well worth sharing with ya.

And if I’m being 100% real with you all – I mean, you gotta dig the bass-lines when the break through to the top of the mix – those tones are fantastic!  Or how about the vocal harmonies & avant-garde vocalizations?  Awesome!  Don’t even get me started on the exceptionally outstanding instrumental section/solos in this tune around the mid-point of the song – because unless you want me to try to explain how Turfseer and his enlisted crew of internet studio-aces ended up taking the essence of Pakistan & cultural sound into a Pink Floyd-ish realm somehow through the atmospheric sitar solos…it’s probably best we keep moving on, or we’ll be here all week.  Suffice it to say, I absolutely love the instrumentation & musicianship you’ll find on “In Toba Tek Singh” and think it’s some of the most innovative I’ve heard from the Turfseer catalog of songs without question.  Yes I dig that it fits on a thematic level for sure – but more importantly than that, I just really like the fact that it’s not a combination of sounds you hear every day, and with the strengths in the songwriting it has from the lyrics to the vocals to the music, there are more access points & gateways into this song than you’d expect to find in most.  Not just Turfseer’s tunes – but any; so credit where credit is due folks, I think this whole song worked out extremely well, and it’s a real highlight in his catalog so far as I’ve personally heard & experienced myself.  You get a full-on story that’ll take you from the heart of sincerity & good intentions, all the way to deceit & betrayal, as told through Turfseer’s poetic lyricism in his own signature style of course – and I gotta say, he’s done everything right in terms of how to build suspense, curiosity, and interest in his words as he’s structured this song, really focusing in on giving this whole single a storyline with a fully tangible beginning, body, and conclusion that speaks volumes on behalf of his capabilities as a writer.  It comes down to great songwriting and stellar execution from all concerned on “In Toba Tek Singh” – I tip my cap when it’s deserved – Turfseer’s created a really strong single here without question.  It’s different, it’s engaging, it’s a remarkably well-told tale, and still controversial & polarizing enough to fit into his style…but at the heart of it all, he really shows his connection to the craft itself, and presents it in a way that the real artists in the music-scene would universally appreciate.

Listen to more music by Turfseer by visiting his page at Soundcloud here:  https://soundcloud.com/turfseer