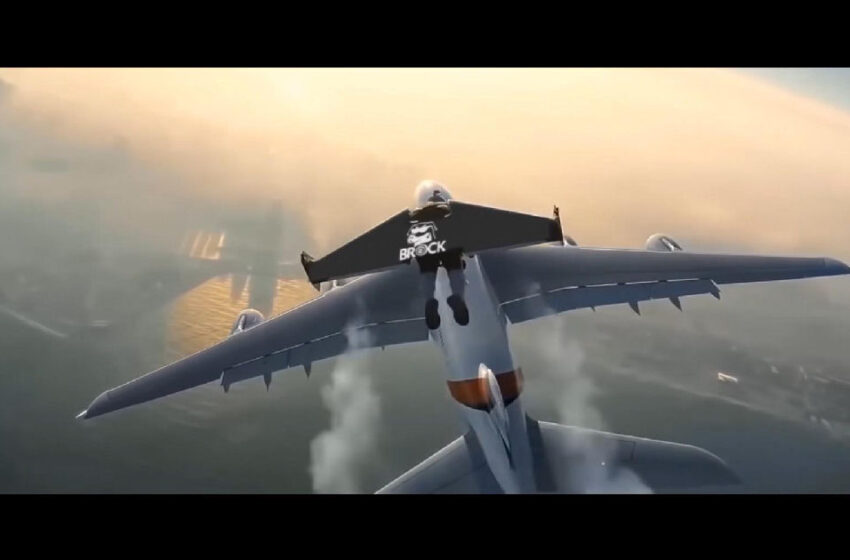 If you require any proof that the past can be just as relevant today and still sound fresh AF in the process – look & listen no further than this track “BELLCAT” sliced from the stellar lineup of BROCK’s 2019 record F Concept.  This dude has had his wheels turning so quickly it’s damn near ridiculous – it’s like BROCK’s not only been on fast-forward, but he makes the entire scene seem stuck in rewind by comparison.  Track after track, video after video, from our first experience with the man on “BEEP” last year, to our more recent sonic adventures with BROCK on his single “BADASS” in 2021 – he’s been supplying sheer quality through the speakers & screens relentlessly, without any signs of slowing down whatsoever – and if you thought he brought out all the tricks & toys already – think again and check out “BELLCAT.”

Talk about a branding genius!  This guy works his logo into this video more times than Daniel Tosh can mention where to find all his shit & everywhere he’ll be on the planet during any/every single episode of Tosh.0 – and that’s both hella impressive and seriously not easy to do.  The spectacular quality of his sound, style, and production techniques are never in doubt – and from our past experiences with BROCK and the music from the F Concept record, he’s given no reasons to assume this would be anything less than the sensational Electro-based creativity combined with cutting-edge skill we know he’s fully capable of.  I’d go as far as to say that BROCK is one of the most listenable & accessible artists workin’ the Electro circuit in the scene today when it comes right down to it…I’d honestly really be hard pressed to find another artist I can think of right now from the independent scene that’s anywhere close to nailing it as hard as this guy has been consistently from the drop of day freakin’ ONE.  You’ll hear everything I’m talking about right there on “BELLCAT” as you would in anything else you can click on by BROCK – the man’s got the real magic & talent it takes to reach the top – and the all-around excellence he continually brings to his music would have anyone out there respecting how much effort he puts into his craft through the stellar results they both hear & see.  Even the most staunch of Metal-heads out there would stop and listen to BROCK, that’s what I’m saying…he makes music with such impeccable precision & outstanding choices from the structure to the selection of sound, that he gives every song he’s ever put out there a legitimate shot of impressing any set of ears within listening distance.  Not many out there can claim such an extraordinary degree of accessibility inside of one style or genre – but BROCK truly can – this is an artist/producer with the power to pull people onboard with brilliantly slick & addictive music.

Instead of Planes, Trains, & Automobiles – BROCK’s got Ballin’ Boats, Flashy Cars, & Private Jets goin’ on – and as per his high standards set already in the past, you’ll certainly like what you see in “BELLCAT” just as much as what you hear in the 2021 video for his 2019 cut.  When an artist is fully locked-in to their vision and knows exactly how to execute it from start to finish both visually & audibly, it looks and sounds like this – “BELLCAT” reveals this guy’s relentless mastery of true entertainment and remarkable professionalism.  I mean, don’t get me wrong – the guy’s a MADMAN when it comes right down to it, and he clearly does NOT require sleep like the rest of the human race – but there’s no denying just how professional BROCK really IS either – any set of ears could hear it in his music, and any pair of eyeballs could tell from the videos he puts out.  “BELLCAT” would be right up there with his best for myself personally in comparison to what I’ve heard so far…but let’s also face facts – BROCK literally cannot lose, no matter what he does; some artists just can’t help but stand apart from the rest when they’ve hit their creative stride, and this guy is a highlight example of that effect.  You can hear it in the passion, in the production, and in the overall results every time – he leaves no stone unturned and puts the attention to detail into his music & videos in all the right places…and it’s because of the authentic dedication & commitment he’s been putting into his career – along with his all-out killer sound – that BROCK is heading full speed towards massive success and straight-up global domination.  Let the good lord spare ya if you dare get in his way.

Listen to more music by BROCK at Spotify here:  https://open.spotify.com/artist/6JOvkv3t1DPGApQMH3jAFR