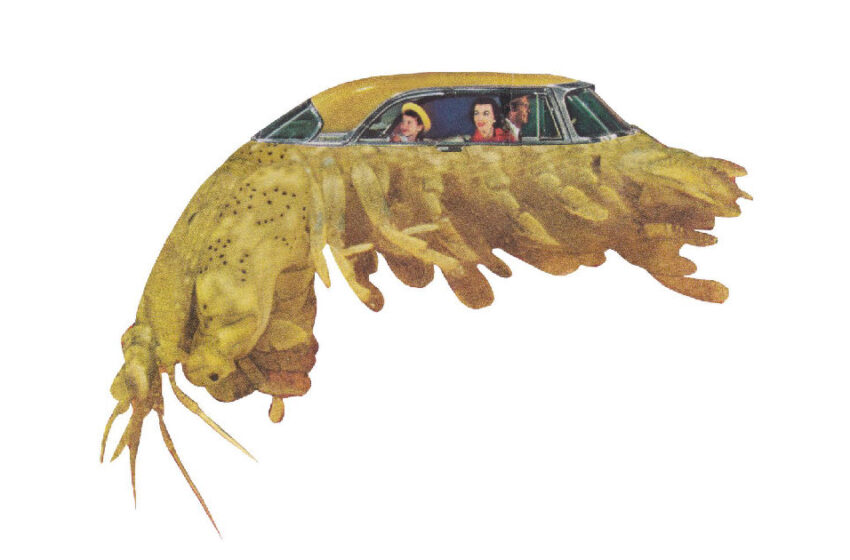 Busy as the proverbial beavers these dudes are.

A full salute of respect to our friends in Polyphonic Exophilia & their efforts to support the people of Ukraine by donating the proceeds & funds raised from their latest singles released online to important humanitarian efforts.  If you tuned into the latest episode of the SBS Podcast, you would have heard one of them already in fact – we played a song called “The Willow Board” featuring Larissa Poho on our last show…and if you haven’t had a chance to check that out yet, have no fear – click here to have a listen.  As I was mentioning on the episode before we played a double shot of the PPXP collective’s newest music – they’ve got a whole bunch of exciting stuff planned for the year, as you’d expect they would if you’re familiar with this hard working crew built of multiple talents – and word on the street is that they’ve got a ton of collaborations lined up.  Not that you’re hearing these rumors from me…you’ll have to give someone else credit for the info…but…shhhhh…from what I’m hearing, you’ll be finding tracks from PPXP coming out with names you know & love from their past collaborations like Lil Kyo XR, Marte Holter Balerud, and Essinauks…the latter of which I’m starting to assume has a permanent residence in their studio somewhere.  You’ll find Essinauks in this set of singles I’ve got here in review today too – and of course, it was only a couple days ago that I reviewed the Fangs & Furs EP that he created with the PPXP crew.

So there you have it, in print, right here in the ol’ black & white for you to read…rumors, rumors…for now at least – but I’d be willing to bet they’re proven true soon enough as the music begins to flow this year.  Other than that…bonus shout out to artist Håkon Holm Olsen…I never shout this guy out enough, because that’s just not what I do…but suffice it to say, he’s usually behind the stellar artwork you find with the music of PPXP, and he’s certainly one talented dude with a professional eye for unique visuals.

Alrighty…back in my lane here…to the music, where I belong.  All-in-all, I’m a much bigger fan of what I’ve heard in these three singles for the most part than I feel like I was to what I’d experienced on the EP from the other day.  Fangs & Furs was…among the stranger stuff I’ve heard from Polyphonic Exophilia – and don’t get me wrong, I like me some weird stuff, but these dudes get like…next-level bizarre when they’re feeling so inclined y’all.  Anyhow.  There’s some really great stuff floating out there on the net right now from the PPXP collective and in their latest collaborations.  “Oh, In The Medows” for example – this is completely stellar in my opinion, and a genuine hybrid of cross-cultural sound that’s highly compelling to listen to.  Outright fascinating if you ask me really – I love the harmonics you hear in this song from the instrumentation…the bass always stands out in PPXP tunes and that remains to be true here once again…and they’ve done some really clever things in how you hear the drums recorded on this cut as well.  Not sure what that is really…could just be the right tones at the right moment, or they might have gotten inventive over there behind the studio boards as well to enhance the effect they have as we listen…whatever they’re doing, I’m digging it.  Reminds me a bit of how like…hmm…lemme reach into my obscure bag here for a moment…it’s like how the drums on that Thom Yorke cover of “All For The Best” by Mark Mulcahy came out on the tribute album Ciao My Shining Star had a noticeable effect and presence that really made a huge difference…anyone else remember that?  Just me?  Okay then…I’ll move on.  Anyhow.  It’d be almost crazier for me to assume that the music of PPXP WOULDN’T stand out at this point in knowing all that I know about’em and their tunes…they’ve always got something rad & innovative goin’ on & they like to experiment – these two things always lead them in the right direction.  Where the main differences are established on this tune, are certainly through what their chosen guest star has brought to it – July Vitraniuk sounds absolutely incredible, compelling, and immaculately into it.  Not only is she unbreakably focused and delivering a spectacular performance filled with confidence as a result, but she sounds purely amazing as she sings…great use of layers & harmonies.  I might not know what it is she’s really singing about, even with the advantage of the English translation of her words right here in front of me…but as far as the emotion and passion of her voice is concerned, it’s something we can all hear & it’s genuinely special.  She was born to sing if you ask me…another great find from PPXP. 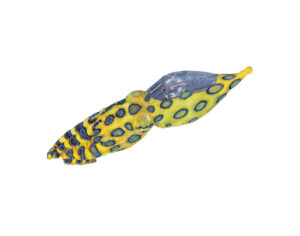 This guy again eh?  Essinauks…hanging around like a bad SMELL I tell ya.  That’s an inside joke…they’ll get what I mean, and no offense is intended whatsoever – they all know I love’em, Essinauks included.  I was already going to play a sample from Fangs & Furs on the last episode of the SBS Podcast, so I figured I’d spread the love around and play something else from this set of singles I had that didn’t feature this wonderful oddball of an artist…but to be truthful, again, I dig what I hear from him more on “Ghost Of Kyiv” than I think I enjoyed either of the cuts from the EP.  It could be that the music here is more on target as well…don’t get me wrong…I had a bit of fun with the guy in writing up that last review, but there’s no doubt about the fact that he brings a master’s touch to the microphone and that he’s got a genuine gift for the art of expression – Essinauks has an incredibly unique voice that’s pretty much impossible to duplicate or mistake for anyone else, and he deserves major credit for that.  I think he’s got more to work with on “Ghost Of Kyiv” in terms of the music surrounding him and how much it is able to grab our attention…it’s almost funny that instead of playing it more straight-ahead in the vocals because of that, he chose to go the opposite direction with a much more avant-garde style of performance.  The keys on this cut might be my favorite element in the music…actually, I’m nearly entirely sure that they are…listen to’em dance on outta your speakers from the lefts to the rights will ya?  Smart ideas to begin with, yes – but the inclusion & pairing of smart production to go along with it is what pushes a track like “Ghost Of Kyiv” right to that next-level beyond…the attention to detail here is impeccable; and considering just how anti-typical a track like this IS at its core, you gotta admire how enticing, interesting, and undeniably appealing a combination of art & music like this single becomes.  Essinauks doesn’t get the entire day off here, but there is less of him compared to what we just experienced on the past EP…what you do hear however, is among some of the best I know from him so far.  Further proof that no one artist or element ever needs to be the dominant trait in what we hear – the main goal is to suit the song and give the moment everything it deserves; and that’s what they do. 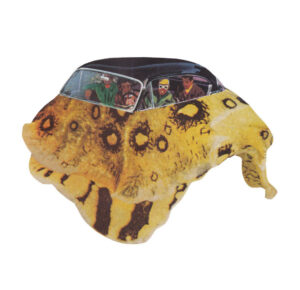 From what I understand, “The Willow Board” is somewhat of an interpretation of a traditional Ukrainian song – this was the cut that I ended up spinning in the double-shot of PPXP on the most recent episode of the SBS Podcast.  This track actually has Essinauks on it too!  I missed that in my notes earlier, but it certainly makes sense now that I’ve been taking a closer listen…admittedly, it’s fairly tough to notice anything beyond the main star of the show – Larissa Poho puts in a mesmerizing performance on the mic in the lead vocals.  Everything else here serves a fairly complementary role in comparison – but everything stacks up fantastically into one seriously quality listening experience.  For a dude like myself that never leaves his basement or the music studio – it’s tunes just like “The Willow Board” that really help to provide some much needed culture in my life, and exposure to a whole side of what sound has to offer that I rarely get to experience…and it’s very much appreciated.  While I can’t vouch for how the rest of the people on my North American continent might hear something like this – to me, it’s like a truly golden gift that’s impossible to repay…this is the kind of uniqueness & art that I’m always seeking out and hoping to find.  Music that’s undeniably different than anything I’m gonna hear just walking down the street in Canada, even with our multi-cultural reputation…when it comes to the music aspect of this country, we’re pretty much rooted in a watered-down variation of what you’d hear in the states.  Don’t get it twisted – the best of what we’ve got to offer would beat the living daylights right outta whatever the USA would put up against it, but it still wouldn’t be all that different, and it would certainly lack any recognizable culture in the sound like you’d experience in listening to a track like “The Willow Board.”  So thank you Larissa…thank you Essinauks…thank you PPXP – I need songs like this one to give my own knowledge a better sense of completeness…this is my education, and I genuinely appreciate it.  Songs like “The Willow Board” are a wonderful reminder of how music is our universal language, and that I’ll never need to know every single word of any song out there in order to be able to connect to it.  Moments like this are ones you can authentically feel…”The Willow Board” is a stellar example of how music can speak to us in ways that nothing else can, and it’s another excellent single to add to the quickly growing/audibly fascinating PPXP catalog.

Find out everything you can about Polyphonic Exophilia at this handy multi-link:  https://linktr.ee/ppxp

Tags: Ghost Of Kyiv Oh In The Medows Polyphonic Exophilia Singles sleepingbagstudios The Willow Board