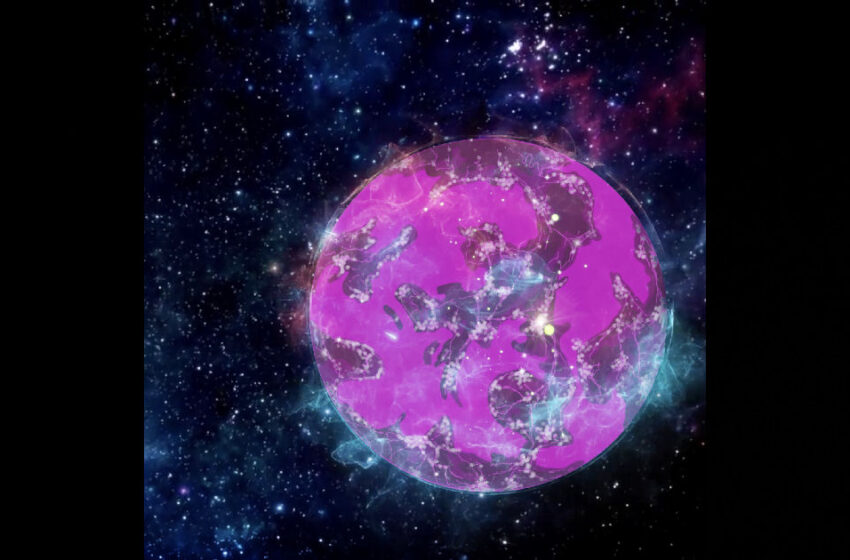 Quite honestly, I don’t think there’s been anyone out there in the scene this year that’s had nearly as much fun as the collective known as Polyphonic Exophilia has been throughout 2021.  Hopefully there are at least a few of you out there familiar with the name of this wildly expressive band based outta Norway by now…I know I’ve certainly been doing my part to yell about’em from my soapbox on the internet way over here in Canada.  Heck – I still haven’t even filed away the last two reviews I’ve written about them…they’re still sitting here on my desktop!  They’ve been makin’ music at an incredible rate throughout this year, and for this particular EP, they’ve enlisted the stellar talents of Canek on the mic.

So let’s catch you up to speed, just in case you’ve missed anything, because there are parts of this EP that we’ve had the privilege of exploring in advance already.  If you haven’t checked out the review on the original version of “GROOVIN’” at our pages yet, click right here and you can read all my thoughts on how this collaboration turned out when I had the chance to listen to it at the beginning of this month.  Suffice it to say, it was a strong enough song for Polyphonic Exophilia, aka PPXP, to want to explore what else it could potentially do, so they expanded the idea into a “House Edit” and an “Acoustic Edit” for ya here on the Planet GROOVIN’ (The New Golden 20ies) EP to give ya three variations on the collaborative single featuring Canek.  It was a good call on their part – listening to the original version of “GROOVIN’” would confirm to any set of ears out there listening that they were all feelin’ this moment and right into it, and as a result, they collectively crank up a vibe that’s got tons of refreshing energy and spark to it.  The original makes stellar use of the band’s natural Progressive/Jazz/Funk hybrid tendencies, and with the addition of Canek’s energy, they’re come up with single that’s every bit as catchy as it is welcoming.  A lot of that has to do with the organic inspiration that comes along with working with PPXP – we ALL feel it – no matter if you’re playing in the bands, writing about’em, or watching/listening from the sidelines, your ears understand how addictive energy can be – and that had a genuine effect on Canek as he wrote the words to “GROOVIN’” – which you can learn even more about on the ol’ SBS Podcast.

If you did check into our show this morning – you got yourself an exclusive spin of the brand-new “GROOVIN’ (Acoustic Edit)” from their new EP in the mix on the SBS Podcast – if you didn’t yet, no worries – click right here to head over and enjoy it!  Was I excited about hearing what Polyphonic Exophilia might end up doing with all acoustic instruments?  You bet!  Did I think they’d come out sounding any less engaging or proficient in their musicianship?  Absolutely not!  There’s no reason to doubt this band based on everything I’ve heard so far – so hearing them break out the double-bass and get their jam on via unplugged means was still just as surefire to be entertaining to our ears as anything else by PPXP would be.  Different side of their vibe, sound, and style – yes – but in terms of the quality, that’s just something I suspect is never gonna drop with this crew, ever.  They make sure the professionalism is always present, even when they’re in the midst of having the extreme levels of fun they’re clearly having on “GROOVIN’” – it’s just part of the DNA of this band and the mission they’re on – quality is key.  What I personally really liked about this EP, was that I don’t know that I actually came out with a preference towards one version over any of the others – I wouldn’t begrudge anyone out there for latching onto a particular style they enjoy most, but really, across the board “GROOVIN’” proves to be 100% consistent.  Having mentioned all that, there’s still something absolutely to be said about transferrable skills and verifiable confirmation – it might not have been a complete surprise at all to hear PPXP thriving within an acoustic environment every bit as much as they do plugged in, but it was still heckin’ nice to hear it, you dig?  “GROOVIN’” is truly the kind of cut with the inherent juice to put some pep in your step no matter which version you choose, that’s the facts – but I gotta say, the acoustic treatment served them extremely well and I’d definitely be interested in hearing a whole lot more from the band in this gear.

The final variation offered on the Planet GROOVIN’ (The New Golden 20ies) EP is the “GROOVIN’ (House Edit)” – which as many of you would see implied in the title, takes this cut more toward the Electro realm in this third version.  Another solid idea and good move on their part, the natural willingness of PPXP to explore their songs and see how they’re able to innovate their sound doesn’t just prove to work out for them this time around, it’s something that’ll be a massive asset to their future going forward too.  Believe me when I tell ya folks, the more willing you are to see what your music can do, even long after you think it’s finished…the more likely you are to be surprised by the fact that “a great song is never finished, only abandoned,” as the age-old wisdom will tell ya.  This whole EP is confirmation of that when it comes right down to it – Polyphonic Exophilia and Canek have proven that there was much more still in the tank for “GROOVIN’” and what it could be than just how we hear it in the original form.  In some ways, I’d probably have assumed that the “GROOVIN’ (House Edit)” would have come out as my own personal favorite of the bunch…there’s just something about this song that seems like it would slide so smoothly into Electro-driven vibes, which it does – but I will admit, I probably did find myself being partial towards the original version of “GROOVIN’” just a fraction more than the other two variations by the time all was said & done.  Don’t get it twisted & don’t get me wrong – we’re splitting hairs here – like I’ve been tellin’ ya all along, if you like one version of “GROOVIN’” it is completely natural to expect that you WILL like or love the other two spins on its design just as much…or at least as close as I got, which is pretty close to equal.  I like that the “GROOVIN’ (House Edit)” has a bit more razzle & dazzle & bounce to what you hear in the atmosphere surrounding the main instrumentation, but I’d also be crazy to claim anything other than what you’ll find at the core between PPXP and Canek being what mainly pulls us in to listen, no matter which style they’re rockin’ this single in.  Think of it like you’re really, really good-looking friend…the one that, no matter which outfit they seem to put on or wear, they make it work and seem like they’re ready for New York fashion week – that’s what these three experiences with “GROOVIN’” is like…each style suits them, and they own each moment with the same confidence they take to any of the rest.  “Sane or crazy, but never lazy” – just like the quote from the very beginning of this review claimed, and proves to be true throughout the course of these three songs – Canek and Polyphonic Exophilia set out to create dynamic entertainment in multiple forms and a mix of pure fun & audible joy on “GROOVIN’” – and it’s crystal clear from their passionate performances, they succeeded.

The new EP, Planet GROOVIN’ (The New Golden 20ies), by Polyphonic Exophilia featuring Canek arrives officially on November 26th – stay up to date on the full details by visiting their official pages below!