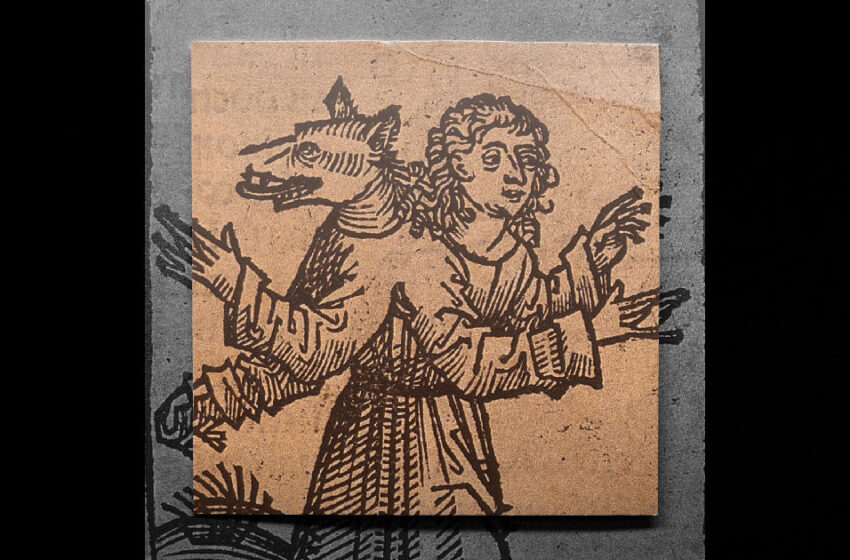 If you tuned into the SBS Podcast earlier on today, you had the opportunity to have a listen to a couple of the latest cuts floating out there in the internet ether, being made by none other than your choice for our best new sound of the year from 2021, Polyphonic Exophilia.  We played a cut from the recent singles they’ve been dropping online in support of Ukraine, and we also played one out of the two cuts on this shiny new EP called Fangs & Furs…a song that I’m sure I probably mispronounced, titled “Schattenjager.”   Because why shouldn’t we play a double shot, given that the PPXP collective did earn your support last year, did they not?  They surely did…and they’ve been on our Wall Of Fame ever since.

In collaboration with a frequent guest-star they like to work with – none other than Essinauks – they’ve put together a two-song record that, according to them, has somewhat of a Zappa-esque influence.  And I suppose that…yeah…I mean…I don’t really feel like disputing their claim; no one’s gonna ever BE Zappa, so it’s pretty easy to say that, no it’s not – and they know that; but it’s also close enough to the zany weirdness Frank was famous for that I guess we can let the comparison slide and stand for now.  As I said on our show…you can be the judge of that for yourselves – maybe you’ll hear that Zappa-esque influence, maybe not…I guess it all depends on how much time you spent fuckin’ around with Frank to begin with in your time listening to tunes.  I can hear a bit of the reference…but it’s almost like you could kinda make this claim about any kind of music out there that’s proudly veering off the beaten path of what’s been done.  If this is Zappa-esque, it’s the low-key version of the guy…personally I associate the man with a very rambunctious energy that’s almost a polar opposite to the smooth experimental jazz vibe goin’ on with “Schattenjager.”  Comparisons, especially when they’re known to us through the declared intentions of their creators, can definitely mess with our heads as we listen – especially us critics.  For the most part, my peers will love the lifeline…they’ll take that ball and freakin’ RUN with it as opposed to be daring enough to even push back just the slightest iota…but anyway…I digress, and I do like what I hear.  Of the two tracks on Fangs & Furs – I’ll be honest with ya…it wasn’t even a close contest as to which song I was gonna choose to play on the SBS Podcast – it was either “Schattenjager,” or nothing at all from this particular EP – but we’ll get to that & why that is what it is in a moment here.  For the time being, let’s acknowledge the solid psychedelic combination of bass, guitar, and keys goin’ on throughout this first track shall we?  Excellent stuff to be found there from every department…the drums/percussion ultimately deserve just as much of a shout-out.  Essinauks on the mic…hmm…I’m not opposed to it.  I’m not 100% sure that he’s able to make as much of a substantial impact on us during “Schattenjager” as he has in the past with what we’ve heard from him, but it is an interesting performance, and a unique one.  It’s always harder to judge those artists/bands that we hold to a higher standard than the rest, and both of these two apply here.  I honestly couldn’t tell ya with confidence that they’ve got an EP that isn’t gonna fly right over the heads of even their most dedicated fans…and as I mentioned on our show earlier today, it’s kind of like PPXP has been making a conscious trade of pieces of their accessibility for more stock in the strangeness.  That’ll work for some of course…and for others…honestly, who knows?  Musically, that’s where I felt like “Schattenjager” had the most to offer…it’d be really tough to resist just how incredibly cool the guitars & bass are in this tune, and the surrounding elements are equally crucial.

Now…don’t get me wrong…just because “Pomme Bleu” makes my skin crawl doesn’t mean it will have the same effect on YOU as you listen – we could have completely different reactions to this tune.  For me…I can readily acknowledge that Essinauks gets more of an opportunity to make a more memorable impact here, and I felt like he achieved that.  Musically, PPXP are as reliable as ever…great bass, but I might be an even bigger fan of what’s happening with the guitar on this cut for once…which is rare, but a nice ‘problem’ to have…as in, it ain’t no problem at all.  It’s an expressive & strange composition with a whole lot of creative freedom tied into the fabric of its DNA…a bit wandering in that regard at points, but still a cut with plenty of redeeming sound, textures, and tones that continue to make it interesting along the way.  So what’s my problem then, you ask?  Great question.  There are so very few ‘rules’ that I have when it comes to listening to music/making it…not so much rules really, just things that I desperately need to be avoided, or I’ll simply have the same reaction nearly every time, not even by choice.  Like counting in a song for example…I fuckin’ hate that shit…or when the alphabet is used, same thing…I can’t stand that either.  For some people, certain words will provoke a harsh reaction & response…think of how MOIST or PANTIES tend to grate on the ears of the masses – look it up folks, they’re almost universally regarded as words to avoid at all costs.  PPXP and Essinauks aren’t counting, they’re not getting MOIST on ya either – but they did cross one of my own lines…which is like…good lord – I have no idea WHY this is even a thing that pops up in music every so often, but people really gotta stop writing about what things SMELL like.  It can’t just be me right?  This is weird to the nth degree, yes?  You agree?  Disagree?  I find it endlessly bizarre.  I suppose that at the end of the day, it’s every bit as valid to write about as anything else could be – we all have to write about something, right?  I guess that’s what it is to me…we don’t HAVE to write about SMELLS do we?  That stuff makes me gag every time.  You’d think I heard music through my nostrils.  But yeah…I mean…this whole first verse is pretty much dealing with scents and smells and whatnot…and sure, Frank would be plenty proud of how they’ve made me so uncomfortable…but it’s taken “Pomme Bleu” straight out of the running as a song I can even play & enjoy while I’d be listening…it just becomes real icky & gross, you know what I mean?  So personally…and like I said, I don’t expect everyone to agree with me here…but personally, I’m pretty much relegated to the instrumentation…and in that respect, fairly limited to just diggin’ on the guitars of “Pomme Bleu” – though I do like the way that Essinauks performs his part for the vast majority of what he brings to the mic.  He’s not always singing or talkin’ about SMELLS…which is obviously a good thing for me & my ears…I think it’s the fact that he’s damn near ASMR territory with how up close and in our face he is in the verses…I suspect it’s designed a bit to make us uncomfortable with purposeful intent – and if that’s the case, congrats…mission accomplished.  I’m gonna stick with “Schattenjager” of the two tracks on Fangs & Furs…but if I’m being completely real with ya…I’m not quite convinced yet that either of these two particular cuts are gonna send me running back to push repeat.  Unique yes, interesting yes – but in terms of what’s tangible…there’s precious little to really hang onto, and even less when it comes to the hooks…though I will admit…in its own way, it is a memorable experience.  They do what they do as well as they tend to do it, but yep, they are startin’ to get a little on the strange side, unapologetically.

Find out more about Polyphonic Exophilia at the Gram:  https://www.instagram.com/ppxpinsta