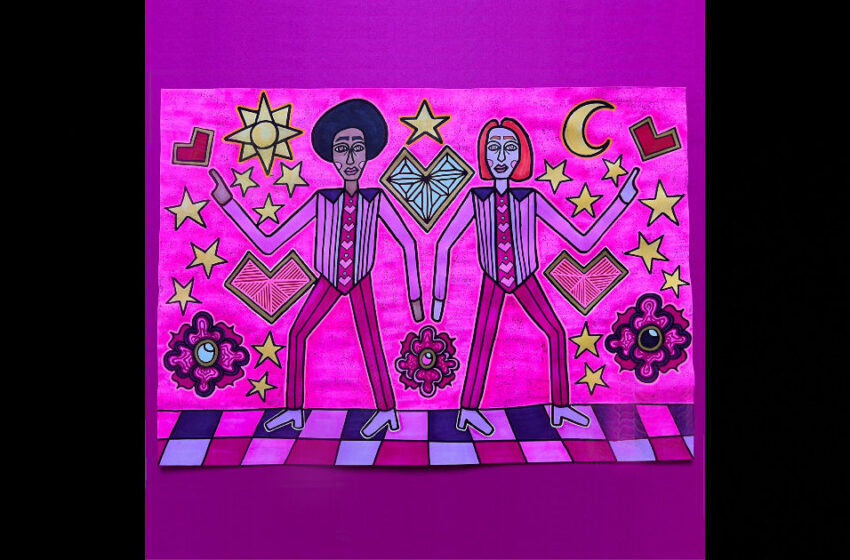 For those of you out there that read these pages of ours on the regular, you’re probably quite familiar with the name Polyphonic Exophilia by now…and believe me when I tell ya, I’m far from done talking about this Cosmic-Funk/Progressive-Jazz band based outta Norway.  They’ve been movin’ & “GROOVIN’” all throughout this entire breakout year debuting their music in a spectacular variety of ways, many of which we’ve documented right here on this very site in reviews of PPXP’s Vol. 2 & Vol. 3 EPs, and more recently we also checked out the band branch out even further with their collaborative spirit on their last single, “夢狂い” Feat. Taku`.  Of course what you can gather from the title up top, is that the PPXP have continued to expand their family of contributors and collaborators even more, enlisting the vocals of Franco-Mexican singer/songwriter Canek to lend his time & talents to their latest single, “GROOVIN’.”

That extra apostrophe always throws me.  I never know what to do with that thing when it shows up.

Thankfully, the music part of the equation I understand…I know what to do with that part when it comes to PPXP – I automatically turn these guys right UP to the rafters where this band’s tunes belong.  True to form, the keyboards & the bass-lines come springin’ outta the gate on “GROOVIN’,” and this new single comes alive in that vibrantly colorful way that only Polyphonic Exophilia seems to have tapped into this year.  Don’t get me wrong, there’s always a plethora of great music to be found in this independent scene we all share – but there’s simply been no question about PPXP being on a completely different level than the rest and their ability to supply the whole community out there with something decidedly unique.  For the most part, we know them generally as an instrumental band…but we’ve also known from day one that Polyphonic Exophilia has kept the doors of opportunity as wide open as they can, which has led to the appearance of guest-stars like Marte Holter Balerud, Taku`, and now Canek here on this new single “GROOVIN’” today.  With their enigmatic approach to making music and an inherent willingness to go wherever these tunes of theirs may take them – to me, it’s been proven that there is one ingredient that is more important to the recipe of the PPXP’s songs & collaborations above all the others…it’s a simple one, but absolutely essential to the nth degree – you really gotta be into it, 100%.  Because you’re never gonna find the players of Polyphonic Exophilia slackin’ – that much I can tell ya for a fact already…even in their very first year of existence…which is downright amazing – every song I’ve ever heard from this band has them all bringing everything they’ve got to every single moment we hear.  To me, it seems like they’re more than willing to collaborate with a very balanced approach that allows their guests to shine just as bright and bring the uniqueness that brought them to PPXP in their first place to have its deserved moment in the spotlight…like I said, as long as YOU are into it as a featured player or singer, believe me, this whole band will be right there to back you up, every step of the way.

Which, I’d reckon, is exactly what you’re hearing on “GROOVIN’” as well.  While there’s no doubt they shift a little more towards an infusion of Pop/Disco in the vibe of this track via the extra flash & flair that Canek brings to the vocals, every single note & tone you hear from the music to the microphone is played with exceptional energy and outright passion that every one of us can hear.  It’s a transferrable type of confidence that extends from the music to the vocals to the production to the final results that we experience in the end…each element inspires the next, so on & so forth – and it’s clearly an approach that’s working wonders for PPXP and whomever they end up selecting to work with, Canek included, of course.  Here in this collaboration, he’s free to bring his expressive best to the microphone, and Canek has no problem whatsoever answering the call – I felt like the verses came out well, but the chorus and surrounding vocals made all the difference to me; that was where this single shined the brightest for sure.  Solid backing vocals and harmonies are key here for sure, and provide the main highlights throughout “GROOVIN’” from the microphone.  Left on his own, Canek supplies copious doses of the right personality & character to suit the fun & upbeat energy of “GROOVIN’” – but I’d say that even he ends up sounding that much more into the moment when there’s another set of vocals along with him.  As per their stellar standards, PPXP ensures that the song itself has everything that it needs – it was a smart move to have multiple layers of harmonies & vocals to bring an added warmth to this party-vibe.  All-in-all, Canek supplies the funk through the swagger in the rhythm of his voice, and the sensational layer of melody when it’s called for…the more intense the demands are on his vocals, the better the results seem to become…and I dig that – to me, that’s the sound of a singer rising to the opportunity.  Bonus points for the insatiably steady drums, the keys & bass that never quit, and the guitar that ends up making a riotously subtle and straight-up spectacular contribution to this tune along the way – like, listen to what you’ll hear in the music as you pass the two-minute mark and you’ll know exactly what I’m talkin’ about – that’s essential stuff right there, and a huge part of what makes a song like “GROOVIN’” connect as strongly as it does, even if it’s not playing the starring role right in the center of the spotlight.  They’re a benevolent crew…Polyphonic Exophilia knows how to make their featured guest-stars sound great in the mix & always give them their deserved space as the highlight of what you hear when they have one appear.  “GROOVIN’” is another really smartly played collaboration that’s just as much fun to listen to, PPXP and Canek have created a celebratory vibe that’s sure to keep the party goin’ long and strong from night til’ dawn for ya – and I know there’s a ton of you out there always looking for music that’ll do exactly that.

Find out more about Polyphonic Exophilia at this multi-link:  https://linktr.ee/ppxp

Find out more about Canek right here at this multi-link too:  https://linktr.ee/canekmusic

And make sure to tune in to the upcoming episodes of the SBS Podcast!  We’ll be featuring “GROOVIN’” in a new way you haven’t heard yet – so stay tuned for that later this month in November, right here at our homepage.