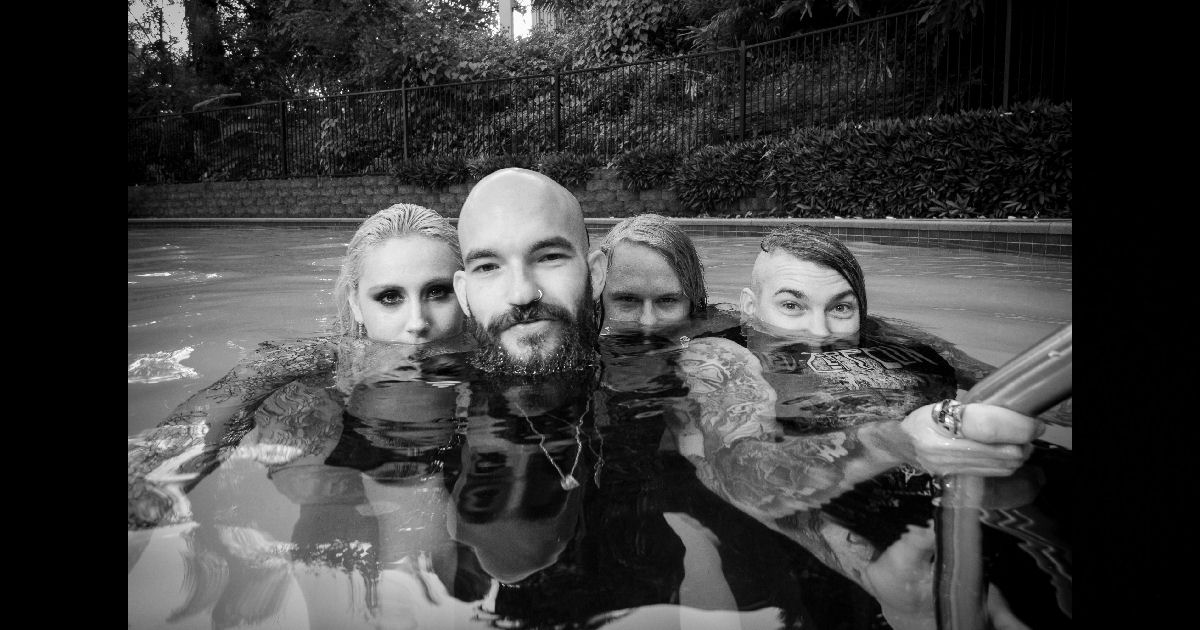 Ever since I heard this band for the first time back in 2015, not a year has gone by since that I haven’t completely looked forward to hearing from this band in whatever possible way I can.  Whether it’s a new single, video, album…you name it, doesn’t matter – Smoking Martha remains one of the most exciting acts out there in the independent music-scene today and one of my personal favorites.  In fact, I think I can say this with full confidence at this point after 5+ years of reviewing records here at SBS – Smoking Martha is without a doubt, my favorite band out of Australia since I’ve called this studio home.

You’ll see the evidence all over our pages that document the evolution of my support for this band and their own journey through music over the past several years.  From releasing singles like “Say You’re Mine” and “What’s Her Name?” in advance of their supremely killer record called In Deep released officially in 2017 – every step that Smoking Martha has made has been a giant leap in the right direction.  They’d go on to make the top-10 list here at our website at the end of the year in our annual quest for Best New Sound, and rightfully so – the stunning quality of the writing, performances and production on In Deep proved what I’d be catching on to myself…that Smoking Martha is a verifiable sonic force on all fronts from the musicianship to the vocals.  The work this entire band puts in deserves to be recognized. 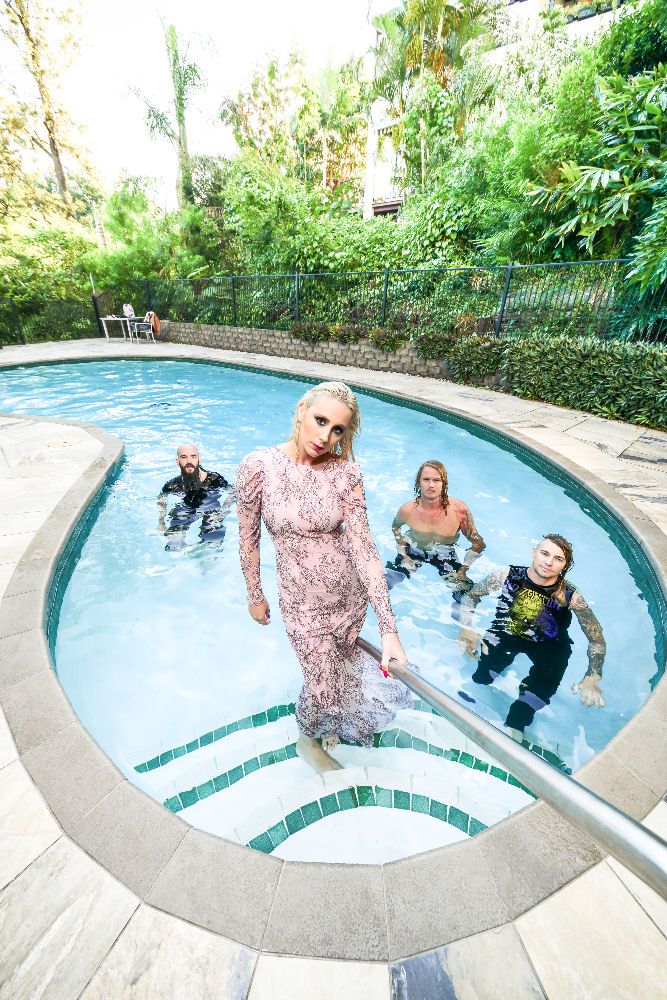 And to be clear, believe me, they ARE getting noticed – as much as I like to think I’ve got this band all to myself like we all do with our favorite bands, I have to come to grips that I have to share them with the world.  You can see scores and scores of solid reviews on their music from all over the map on their social media and websites, thousands-upon-thousands of views on their videos – which are ALL killer by the way – and the fact that they’ve shared stages with the likes of mainstream giants like Seether, Wolfmother, Everclear, Fuel, and many more…it all points to the certainty that people everywhere are united in turning this band right the fuck up where the volume belongs.  As it turns out, the LUCKY people over there in the UK are going to get a serious taste of Smoking Martha next when they rock a full-month tour over there throughout November.  To say I’m jealous of the UK at large right now would be in the running for understatement of the year…but the more they travel, the more stages they play, & the more the word continues to get out on Smoking Martha…hopefully it leads them closer to Canada.  I’ll say this as firmly as I can say it…whether they come here or I go there one day…I ain’t gettin’ my torch snuffed out on this planet without having seen Smoking Martha play a show live before I go.  For real – have you checked out the live footage you can see on their sites?  This band looks like they put on absolutely epic shows…you can see full crowds completely into it every time.  I wanna go to there, wherever that is next for these Aussie rockers.  So do the right thing UK!  Yes I’m speaking to you all as one over there – get off your asses, get out there and see this band rock LIVE when they come through.

Okay…now that I’ve gotten all that off my chest, there’s a music review in here somewhere, I promise.  You can read my full thoughts on “Baby Let Me Go” and the entire album In Deep by Smoking Martha in the review I put out on the record last year by clicking here – but I do still wanna say a few more things about this.  First and foremost – a huge thank-you to the band for even creating this song!  They have no idea how much I’ve actually spun that record of theirs…and certainly this particular track perhaps above all the rest if I was looking for a single for a mix or a quick soul-soothing cut on a playlist or on our Podcast.  There have been numerous examples of bands that have rocked solidly throughout their careers making that bold decision to take a more tender & delicate route for the right single when it comes along.  Think of bands like Guns N Roses when “Don’t Cry” and “November Rain” came out of nowhere, or “Black Hole Sun” by Soundgarden, “Nothing Else Matters” by Metallica…I could stock this list with a ton of examples, but you get the idea – when the time is right, the right band knows how to get the most out of this pivotal moment.  And in my opinion, it’s songs like “Baby Let Me Go” that open new doors for a band like Smoking Martha, just like it did for each of those examples I’ve just cited.  So did they make the right call by putting this song out as a single?  I think the conclusion is a hard YES, you bet your ass they did.  The point is that, when you ROCK as much, as often, as hard and extreme as Smoking Martha does – that boldest move can actually become the softest sound…that’s what this is. 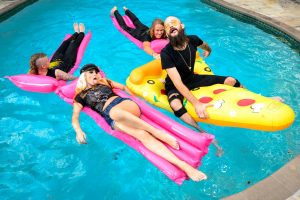 I’ve played this song for friends, I’ve played this song for strangers, I’ve played this song to anyone out there willing to listen to me rant and rave about how next-level this moment on the album & in the band’s evolution that this tune really IS.  So to see it come to life onscreen with a beautiful new video to support it was honestly like a dream come true, no bullshit.  It’s a song so strong that it didn’t need anything too flashy, it needed sincerity – and that’s the exact route that Smoking Martha took with the video; what this single needed was the support and getting out there in every medium possible.  Love the way it’s shot and captures the intimate & isolated moment in time this song has in its atmosphere, showing scenes of the acoustic guitars that make the magic in the music and lead-singer Tasha in angel wings amongst subtle religious imagery in the background.  The balance of “Baby Let Me Go” is still in my opinion, just jaw-dropping excellence all-around…to have such a delicate sound in the music with such a mix of fragile & powerful vocals combined like this truly takes my breath away every single time.  And it still does…I think I’m what, about a year & change into listening to In Deep now?  “Baby Let Me Go” has never once even gotten close to getting old to me…that entire record holds up seriously strong as time goes on and every time this single comes on, I get chills down my spine from the whole vibe.  I was massively impressed with the fact that the band made this move to expose the rawness & vulnerability in their softer-side to begin with…it was beyond satisfying to see this song get the video support it deserves and a crack at being a verified single from Smoking Martha.  I think for those that do know their music well already and understand how killer their gripping Rock style is, hearing “Baby Let Me Go” for that first time isn’t so much a shock to the system as you’d think it might be so much as it is a completely welcome sound and melody that heads straight to the heart quickly & comfortably.  It’s emotionally powerful, more than heartbreaking, and real as feelings can be expressed through music.  Full props as well to guest-star Chris Carmichael, who brings the stunning strings to “Baby Let Me Go” and to Tyson Lloyd Films for putting together the perfect kind of video that complements the song & allows it to remain the star of the show – and of course, to the band, for creating this incredible tune.

Find out more about Smoking Martha from their official homepage:  http://www.smokingmartha.com 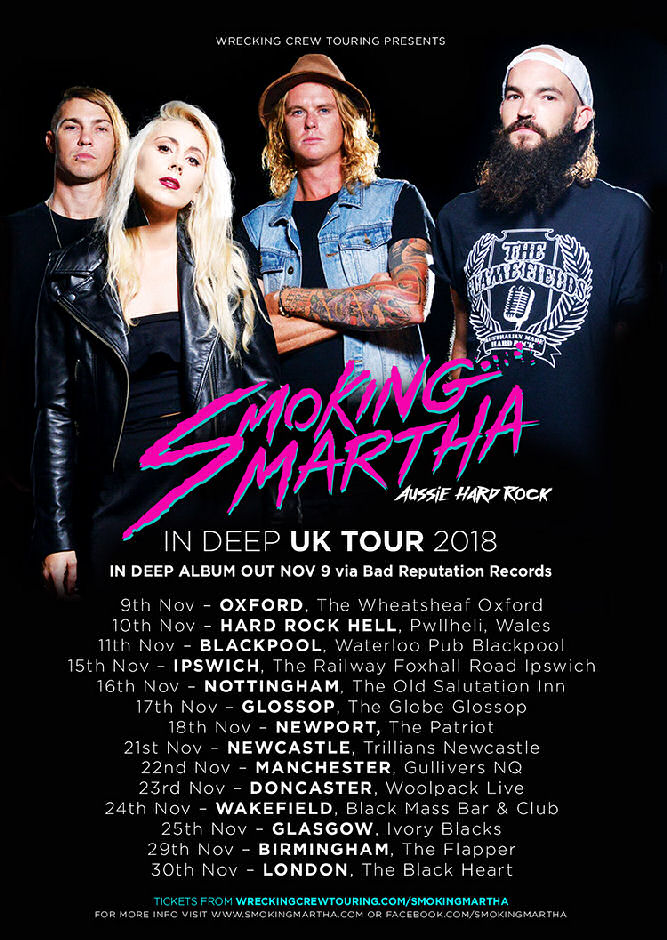