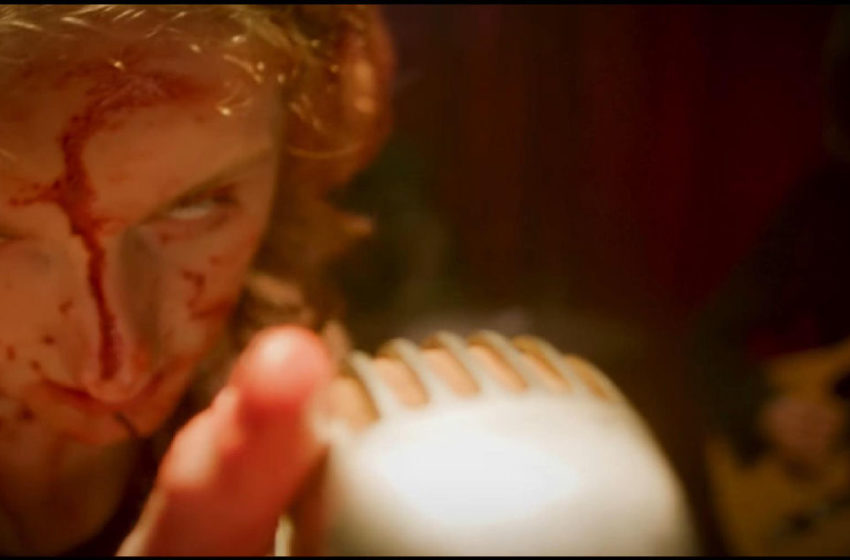 “I killed my brother last night…I ate his remains…”

Well you can’t exactly compete with sunshine and rainbows like that now can ya?

Grim!  Perhaps damn near even Grimm with two Ms!  Love Ghost have crafted an eerie tale onscreen for the new video supporting their latest single “Dead Brother” – and man does this look killer or what?  Expertly directed by modern-day Horror icon Jeff Daniel Phillips (3 From Hell, Halloween II, TV’s Westworld), the five-piece from L.A. makes another incredibly cinematic impact with the shocking visuals, lyrics, & theme of this cut…”Dead Brother” is gonna cling to your freakin’ bones.

It’s also gonna rock your speakers in the right way for surely.  LISTEN to the meaty bass-lines in this cut as it starts will ya?  Huge punch in the low-end from Love Ghost on “Dead Brother,” and a tight rhythm section that gives the guitars the additional freedom required to roam right to the fringe and explore.  Lead-singer Finnegan Bell is decked out in tons of tattoos & covered in blood, or dressed up in a suit for…well…let’s just say a dinner-party of sorts shall we…keep a close watch on the storyline of this video…you’ll find there’s a lot more goin’ on here than meets the eye.  I’m not gonna give it all away here of course…but this also feels like a good reminder to you all to make sure that the person you show up to the party with is the one you’re leaving with too eh?  That’s as much as a clue as I’m gonna give ya…check it out for yourself and push play on this wicked new video by Love Ghost for the new single “Dead Brother” below!

You see what I’m saying folks?  I know I’ve made similar comments about Love Ghost in the past when it comes to the quality of what they put out into the world – but by that same token, did what you just experience not confirm what I’ve been tellin’ ya all along?  Love Ghost puts the work in, and they get the results.  Period.  Full-stop.  End of sentence.  I’d love to say it’s more complicated math than that, but at the end of the day, it’s really not any more complicated than understanding they put serious effort into every move they make from the studio to your speakers & screens.  And they fully deserve the massive fan-base they’ve amassed and continue to grow as a result; I’m a fan just like so many out there, and I can tell ya firsthand that ALL of the multiple ways this band has found to entertain us already so early on into their career show that they’re thinking about their music and videos from YOUR perspective, just as much as their own.  Know what I mean?  They’re never short on ideas and always bring something new to the table; each experience with their music is excitingly different than the last, and they’re clearly consistently pushing themselves further creatively with every step forward in their evolution.  I look at a video like “Dead Brother,” and downright marvel at not just how monumental and EPIC this video IS – but also the presence of the main stars of the show too…Love Ghost makes sure to bring their A-game each and every time we see & hear them, and it’s undeniable that their confidence continues to grow.

That’s a hella nice problem to have if you ask me…and when you’re in such a predicament like this, you’ll find that, just like with “Dead Brother” here, it often results in new breakthroughs for a band that you can visually see & audibly hear that take them to the next-level yet again.  Onscreen, I think this is definitely one of the best videos I’ve seen from Love Ghost so far, if not THE best – and considering how much awesomeness they’ve already cranked out online…honestly, that’s really saying something strong.  Musically as well…I think there’s a good argument to be made that this cut represents some of the tightest material we’ve taken-in from Love Ghost to this point in their career as well.  You see what I’m saying?  All signs for this band continually point in an upward direction; they might be young, they might have already accomplished a TON in comparison to most bands/artists out there – but believe me, it’s moments where you watch a video like “Dead Brother” and hear the continual evolution in their music that show the potential & promise of a band that is ALWAYS going to surprise you beyond expectations.

Thematically…sure…”Dead Brother” is not gonna be for the squeamish…and by that same token, Love Ghost might just wanna keep an eye out for anyone that’s like…you know…TOO into this too, know what I mean?  There are some freaky fans out there in this world dear readers, dear friends…that’s all I’m sayin’ – hell, maybe you’re one of them.  So they might pick up the odd serial killer in-training as a huge fan one day along the way with a song as devilish as “Dead Brother”…doesn’t that just go on to prove that music is still a much more universal language than it’ll ever get the full credit for being?

Killed it.  Love the slow-burning grind and character in the music from the lefts to the rights…I supremely dig on the fact that they’ve really stepped into a whole new realm of ideas & personality…all-in-all, video/single-wise, Love Ghost have put together powerfully gripping entertainment any way you slice it.