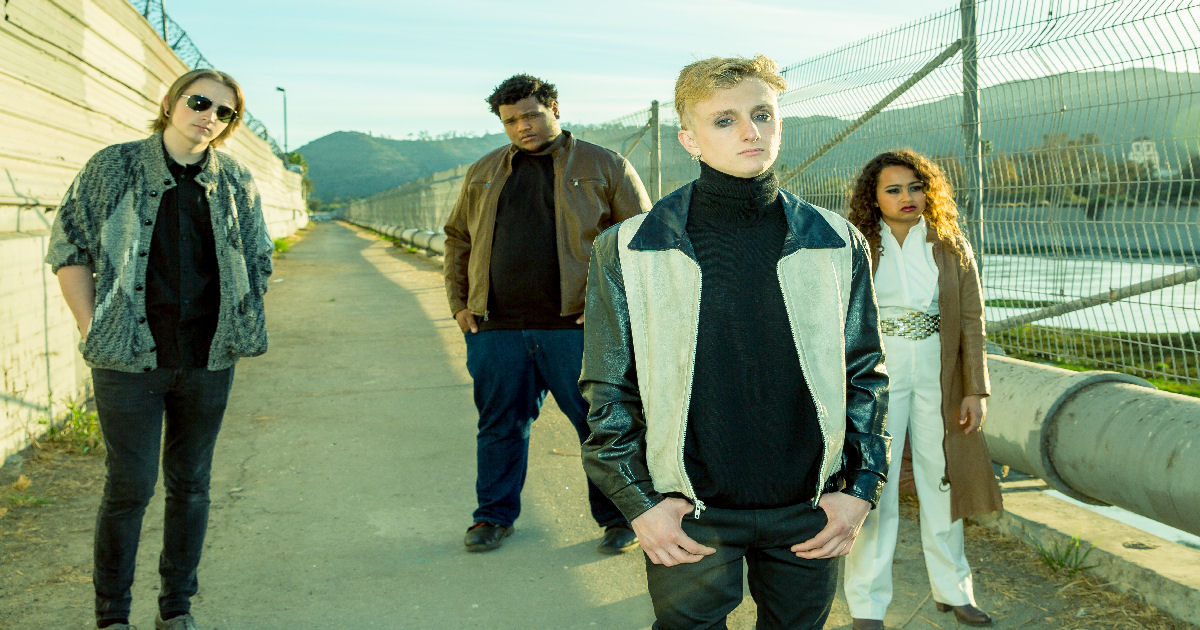 What did I tell ya?  Back in August of last year, we checked out one of the main singles & videos from Love Ghost’s album Lobotomy, a cut called “Girl Pusher” – and I noted then, as I will again now, that this band has all the right pieces in place.  Last time, they had the additional advantage of one seriously kickass animated video to go along with it…and I love cartoons…so don’t get me wrong, their single was a solid one for sure – but it had that visual accompaniment you couldn’t help but love as well.  As much as I like to think I can remain objective, again, I really, really like cartoons – did I mention that already?  The point is…I don’t think it tainted the process…I’m positive I would have really loved “Girl Pusher” just as much if it had just been the audio experience and that’s all there was…but it’s hard to really know.

This time around, I get that option.  This time, I get to hear Love Ghost’s new single “Mr. Blue” as it is, without the kickass animation…and though they’ve slightly messed with my controls on this experiment with a slight switch in sound & direction on this new song…I felt like I got to really appreciate the music this time around a whole lot more.  I mean…I don’t want anyone to mistake my words here – I’m more than stoked for “Mr. Blue” to end up with a video someday – I’m just saying that for this particular experience, having the audio only in advance allowed me the opportunity to listen to Love Ghost in a different way than I did last time around.  We’re all on the same page with that?  Cool.  Moving on then.

Let me start out by saying (you know, on my third paragraph…) that I am once again, a massive fan of what this band is up to.  I’d even go as far as to say that I’m probably more impressed than I was last time around, which is actually saying quite a bit – Love Ghost was impressive then, they’re impressive now…but I’d probably argue this new single already reflects the growing maturity and evolution within this young band.  “Girl Pusher” was such a brilliantly angst-filled song with explosive parts added into the equation – here on “Mr. Blue,” everything is smooth AF really, no matter how wild it gets.  And you can still count on that dear reader, dear friends – Love Ghost WILL crank up the heat, several times along the way…that signature staple of distortion and melody combined is still well intact folks.  When you listen to “Mr. Blue” however, I’d be willing to bet that you’ll notice the more accessible sound that’s being pumped out here overall…and in my best estimation, it was a really good move for Love Ghost.  They didn’t leave behind what makes them THEM – they just enhanced it…they’re refining, evolving, moving forward, progressing (I’m running out of synonyms I better wrap this part up) and changing – but for the better.  “Mr. Blue” will have the ability to cast a wider net and snag the haul of a bigger audience – these hooks they’ve created in the chorus are freakin’ magnificent, straight-up, full-stop.

Now let me tell ya why that is…and that’s the vocals from Finn Bell.  Again, I got all the time in the WORLD if he and Love Ghost wants to Grunge it up and scream it out like they did with “Girl Pusher” – there were no issues there…but if you were to ask me what I preferred personally, I’d have to give it up to “Mr. Blue” for sure.  Melody-wise, you just can’t beat the hooks that you’ll find in the chorus and how perfect the vocals came out at that point – the execution is spot-on as spot-on can possibly be.  So credit to this band for dialing back the rage a bit this time around and pushing the limits in a new direction – I think they got the absolute maximum out of the hooks that are found all over “Mr. Blue” – I’d tell ya they’re just in the chorus, but that’s certainly not the case.  Those might be the most golden-honey moments vocally that’ll catch most ears perhaps, but right from the get-go, Love Ghost puts their own uniqueness on display and starts pulling you in.  That’s where you wanna give real credit to Mya Greene, who is arguably one of the most important ingredients in Love Ghost…if all four pieces of this band didn’t contribute so competently & confidently, she’d walk away with the award easily…but the reality is, all these players hold their own.  Playing the viola, Mya adds a huge amount of depth to the Love Ghost sound…she adds tension, drama, suspense, beauty, emotion…considering the Alt-Rock based sound of the band, it’s not a usual pairing or combination that you’ll find out there for more than a song on any given album – having her in the band is an asset and an advantage above a ton of what’s out there.  And once again, to be clear, it’s not JUST the fact that Love Ghost has a viola player in the band – the fact is, she plays that thing like her life depends on it and adds an incredible dimension of sound that is undeniably key to this band making it.

All this fantastic stuff being said about Finn and Mya – I’m not finishing this review until I’ve really explained how ALL four players massively contribute to why this works.  Samson Young is a beast on the kit – for real, this guy is hittin’ the kit with a STRONG arm…precision-wise, he’s bang-on without exception…crisp hits, perfect time, great tone and energy in his drumming…he’s the backbone here.  And then there’s Ryan Stevens, because you need four players in a real band.

I’m kidding!  There’s a lot more to it than that – and if you were to ask me, between the INCREDIBLE bass being laid down by Stevens and the wildness that the guitars from Finn surge into, I’d have to flip a coin as to which player was the real unsung hero of this track.  Because here’s what I can tell ya…first of all, Ryan is playing his nuts off, and he’s crushing it – Finn, he ends up finding just KILLER moments in the solos & background towards the end of this song and keeps this “Mr. Blue” flowing like clockwork with how the guitars interact with the impeccable rhythm section.  They’re both insanely impressive and yet somehow, they might STILL not be the first, second, or even third thing you’ll notice about “Mr. Blue” or Love Ghost!  How is that?  The answer is simple…there are just absolutely no weak points in this band here.  Not a single one.  The true spirit of Alternative runs radiantly through this cut…it’s a great single.

I continue to remain absolutely STOKED about this band…I love the way they are now, I think they’ve still got their best years ahead of them, and I 100% believe they’re motivated & skilled enough to actually go the distance.  When you read about Love Ghost online, you’ll see they’ve already opened for a ton of well-known acts out there…videos like “Girl Pusher” scored tens of thousands of views…they’ve got a killer first record under their belt and they’re already releasing new material to follow it up.

People like to call me crazy sometimes…but when a band has really got what it takes, it’s something you can always hear in my opinion.  Love Ghost is going to be around for a very, very long time and they’re going to go through a ton of rad phases of their own evolution.  “Mr. Blue” is one of them already – everything about their latest single screams pro, radiates their own dedication to their band & music, and certainly delivers on creating another series of memorable highlights within one experience.  Like those harmonies just after or around the 2:45 mark?  C’mon people – that’s sonic gold right there.  Massively impressed with this latest move by Love Ghost…I fully believe there’s every reason to believe they’ll be out kickin’ all the ass and going the distance over this next decade to follow.  Mark my words.

Be sure to tune in to today’s episode of the SBS Podcast to hear more of my thoughts about Love Ghost and their brand-new single “Mr. Blue” – and find out more about them at their official website here:  http://loveghost.com