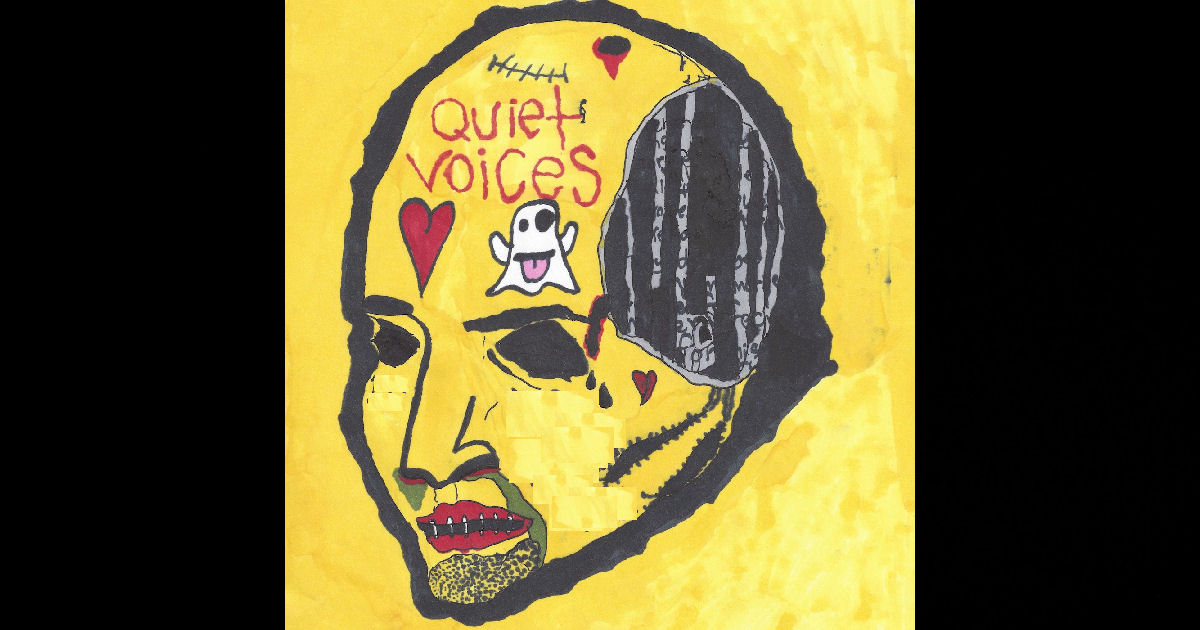 Right from the get-go back in August last year, in hearing Love Ghost for the first time through the killer song/video they put together for their single “Girl Pusher,” I’ve been a firm believer that this band finds their way to whatever they choose to define as the success they’re seeking out.  They’ve had me verifiably convinced of their promise & potential from the first single forward – and to this very day, up-to & including this new single “Quiet Voices” here – they’ve never done a single thing to jeopardize or shake-up my belief that this band of four from California could end up goin’ worldwide one day for sure.

If you’re familiar with the band (and ya should be by now) – then you already know that Love Ghost is built on a wealth of talent, balanced out extremely well between all members.  They have undeniable assets in their sound/style that set them apart from the rest, and audibly provide them with a sonic advantage over so many others out there…and the best thing is, they USE these powers to make an impact exceptionally well.  Where so many bands can somehow manage to squander their most stand-out aspects or not let them shine as bright as they potentially could – Love Ghost, for still being a fairly new band & all, seems to fully understand how to get their best onto a recording, which features to draw to the surface of your speakers, and how to create music that authentically suits them at all times.

And to be truthful…at this point, between “Girl Pusher,” their last single “Mr. Blue,” and this new single “Quiet Voices” – I’m not even so sure I’ve actually got a favorite – I pretty much love every one of these cuts I’ve heard from Love Ghost so far and I’m massively stoked to hear they’re working towards a full-length record, rumored to be coming out sometime later in this year, as early as summer potentially!

Where “Quiet Voices” excels, in my opinion, and perhaps takes the story of Love Ghost even further, is how it might better reveal the depth of the musicianship and the contribution each player makes to this band overall.  Like, full shout-out to both Ryan Stevens on the bass and Samson Young on the drums – because they’re gonna be the unsung heroes of this song, yet they’re also undeniably the backbone of what keeps this cut rollin’ along perfectly if you’re listening close.  In the tradition of most bands out there & how the public masses tend to latch onto the rest of the surrounding elements like the lead-singer or additional instrumentation (I’m no exception to that either folks) – Ryan and Samson are always gonna have to battle a bit harder to get the attention they deserve for the effort they put in.  Great players without a doubt, especially again considering the overall age of Love Ghost as a band overall, but for many listeners out there, what Samson and Ryan do is always gonna be part of a great thing goin’ on that listeners hear either as one full-on experience, or where most are still likely to come out remembering the signature post-grunge growls & melody from Finn Bell on the vocals & guitar, or the inimitable badass Mya Greene on keyboard & viola.  ALL I’m sayin – especially when it comes to “Quiet Voices” – is that the band has been given a bit more room to shine – you’ll hear Ryan & Samson lead the way through the verses with the rhythm section, and they do a spectacular job.  So give’em ALL some real credit…it can be tough to stand out in a band where EVERY player stands out.

But that’s Love Ghost for ya…that’s where they’re at already and arguably, they’re still just getting started.  I’ve said it before, and I’ll say it again & again, the potential for where they can go is staggering.

Because when you DO factor in the incredibly crunchy, grungy, and melodic vocals from Finn and the draw his sound/style would bring to listeners – and the ALWAYS awesome viola & keys that Mya brings to Love Ghost – it becomes impossible to ignore just how much power this band shares between them all.  Finn might very well be at his best here…I’ve had an easy time digging on the edgy way this guy has combined Alt/Indie/Grunge/Pop from the moment I first heard him…and energy-wise, I think he finds an incredible way of expressing the words here.  Almost like the thoughts in his head being forced out, but in a great way…like you can hear the struggle to keep some of them to himself and how others escape naturally into “Quiet Voices” for all of us to hear.  Lyrically dealing with self-doubt, Finn dives deep into a bold set of real feelings, thoughts, and emotions…which is all well & good…but it’s the way he performs this cut with such insightful instincts on HOW to sing it that brings the full meaning to the words.  If you’ve ever felt trapped inside your own head or your own thoughts – you’ll relate to this tune big-time – plus, the melody-line that Finn’s written into the main hook is 100% spot-on freakin’ awesome and magnificently expressive.

As far as Mya goes…Love Ghost knows where I stand on what she creates in the aura, atmosphere, and vibe of these songs – she’s 100% essential, and she’ll reveal all-kinds of reasons as to why that is once again on this latest single of theirs.  Whether it’s the graceful way she plays through the verse, or the way she attacks the chorus, or the gripping & grinding solo she’ll put in around the 2:30 mark – it’s always crystal-clear that Greene is key to Love Ghost’s growing identity & signature, expressive sound.  What I continually feel like I love MOST about the fact that Greene thrives so hard in this band, is that between ALL the songs I’ve heard from Love Ghost so far, she’s been an immaculately organic part of their sound – Samson, Ryan, and Finn have always found really clever ways to both create space for what Mya brings to the music, or find insightful methods of adapting to her when she takes the reins.  The end result, is that nothing ever feels forced in Love Ghost when it comes to the structure & sound.

I mean…Finn’s always gonna sound like he’s passing a stone…but you know what I mean.  That’s why we love him and that’s a totally different kind of forced…that’s the good side…the grunge side.

“Quiet Voices” has Love Ghost continuing solidly on what’s been a true run of great singles since I first started listening…no signs of this crew slowing down & all the confirmation we need for our ears to know they’re still heating up…new album coming soon & all the reasons you need to be excited about what’s to come are already out there in various ways online from songs to videos.  So get yourself some Love Ghost and climb aboard this bandwagon while there’s still enough room for you to find a seat!

Find all kinds of awesome stuff out about Love Ghost through their Instagram page here:  https://www.instagram.com/loveghost_official