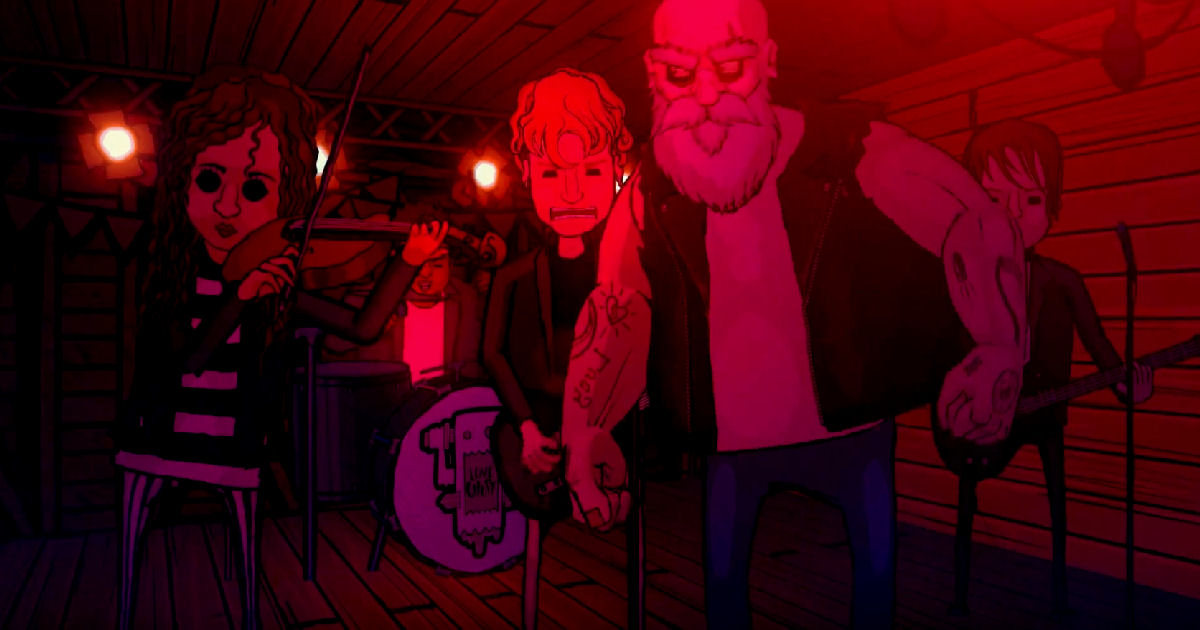 Stick with these guys…there’s definitely awesomeness at work here.

At the very least, you KNOW you’re in for something completely badass when you look at a band’s social media pages and in the first two ‘artists we like’ you find listed – BACK-to-BACK – are Alice In Chains and Chopin.  Believe me when I say, you’re not going to find that combination on the regular to begin with; but even more rare would be to find that the music being made would indeed show the influence of both.  And somehow…that’s exactly what we’ve got here in many ways…Love Ghost is one of those bands that makes a guy like me believe in the future of music…because it’s a band like this that can further what music can actually DO and lead us into all-new experiences that we’ve truly yet to have.

There’s so much going right with their latest single “Girl Pusher” that it’s making my head spin just thinking about all the possibilities, opportunities, and future potential a band like this will have.  In this one single alone, you can hear Progressive, Metal, Grunge, Alternative, and Classical music furiously blended into one savagely satisfying and mammoth sound.  Give this band the credit they deserve – Ryan Stevens is a beast on the bass, Mya Greene adds an essential part of Love Ghost’s sound through the viola, Samson Young is clearly a warrior on the drum throne, and the vocals from lead-singer/guitarist Finn Bell SHOULD drop your jaw in amazement – cause this dude is CRUSHIN’ it on the mic.  I mean, don’t get me wrong, I pointed out Alice In Chains and Chopin because they appear first on the list I was looking at – but not too much further down you’ll find Nirvana listed.  This is hallowed ground for me…I grew up with just about every known picture of Kurt Cobain staple or glued to my wall and did everything I could possibly do just to look one iota more like him if it was possible from my teenage goatee to my greasy hair…so believe me, I’m not about to say this next comment lightly…

…but Finn is damn near Cobain/Staley incarnate at times on this tune.  In terms of the raw scream and genuine combination of angst, rage, and melody of the chorus, you’ll hear it.  In the verse he meets you somewhere halfway between someone like David Lowery and Kurt…again, both the same era…way different styles of music, but that undeniable rawness that ends up being seriously gripping to listen to.  I dig the verse…I’m certainly not taking away any points there – but when it comes to the chorus of this cut, it’s severely next-level stuff.  That’s when Finn takes you right into the heart of the scorching heat of the Grunge influence on Love Ghost – he sounds like Kurt singing an Alice In Chains tune.  I’ve checked out a few other cuts from this band out there too…Finn even looks like a young version of Layne in some of the footage I’ve seen…I mean, we’re past the Grunge era officially so he’s a bit more cleaned up, but you’ll see it, you’ll see it.  And you’ll hear it…the influence is definitely there and as a band, it’s clear that Love Ghost definitely knows their music history in addition to really having their own shit together.  They’re all still plenty young…there’s still lots of room to grow – but what puts Love Ghost on a real course to pull out a giant WIN with their career in the long haul is that there are limitless directions that they can take this style & sound they’re creating.  They’ve all got the chops…Mya alone I’m sure could entertain many out there for days – violins and violas are hot stuff out there right now and have definitely caught the attention of the mainstream in modern-day music, and that’ll likely be an additional advantage for Love Ghost in their future.  Certainly already sounds like one now!  But make no mistake, they’re all bringing it and clearly pushing themselves hard on “Girl Pusher” – for all of its Grunge-like tendencies, there’s a definite complexity that exists in the structure and energy that plays a significant role – it’s not the same simple three chords and then those same chords backwards like they could get away with back in the 90’s, you feel me?  But that’s what makes Love Ghost exceptional – they’re not just looking to do what’s already been done, they’re pushing themselves to create music that hasn’t even been thought of yet…and every so often, hopefully more-so than not over time, it’ll take them into ambitious ideas like “Girl Pusher” that really hit the mark.  It’s interesting, it’s different, it’s imaginative & highly skilled – and it’s definitely appealing to me personally for that extra Grunge-factor that gets threaded so deeply into this whole vibe.  All-in-all, they throw the switch multiple times on this single, kick themselves into overdrive & shift this song into moments you’ll seriously remember.

To the point where this is definitely a song that makes a solid impact & impression bold enough to last – it literally doesn’t need an inch more help than just being the badass composition it IS – yet it ALSO has one of the best vids you’ll see this year, especially if you love cartoons as much as I do.  In what seems to be a collaborative effort, Finn’s come up with the storyline you’ll see and handed the concept to the uber-talented Davie Brown of Empirius Graphic & Motion Design who animated the video – and through their efforts to bring this vision to life, they’ve racked up hardware & awards like you wouldn’t believe.  Honestly!  It’d take another separate review to list them all…from local film festivals to international ones – Love Ghost has again positioned themselves perfectly out there in the music-scene in ways that will get their music both noticed AND heard.  For all you out there wondering what needs to be done to get some attention…believe me when I say taking a page out of the Love Ghost playbook will be to your benefit – they’ve put in the effort from all angles, audio-to-video, and applied an authentic, unshakeable focus.  As far as Davie’s concerned – this dude is all-aces…the video for “Girl Pusher” is pretty much every bit as badass as the song is…combined together, this single becomes a genuine force to be reckoned with.  Love the way the movement of the video syncs up so incredibly well with the most significant transitions in the music’s structure and flow – it’s details like this that make all the difference.

I see & hear a lot of potential in this band that’s going to lead them to even more amazing adventures in their future to come – I’m stoked on what I’ve heard on “Girl Pusher” and feel like Love Ghost is well on their way already to establishing their own identity for a band that’s only been around for what looks like a couple years, with two of the members still technically being juniors in high-school!  Lots of room to evolve and really dial-in on the most major elements of their sound & style…you gotta assume that if this is the level their at now, that they’re going to become seriously monstrous over this next decade coming up here.  And if they keep at it from all-angles like they are here with their single/video for “Girl Pusher” – there’s a massive chance that this band will go the distance and find the success they’re after.

The new Love Ghost single “Girl Pusher” officially comes from their new album Lobotomy, released officially in the summer of this very year we’re all in right now.  Fresh as it gets from their ideas to their own timeline – make sure to go find out more about Love Ghost and visit their official pages below!