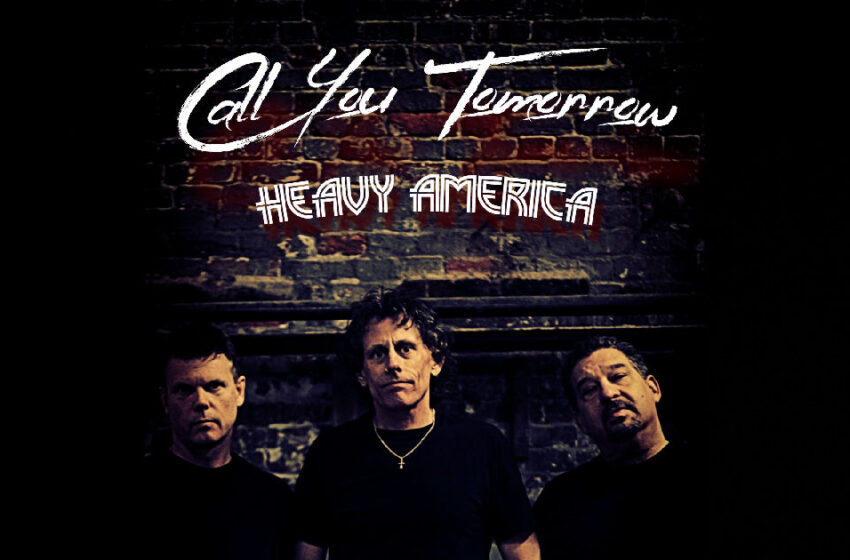 “No it’s not okay when everyday feels like shit.”  #Preach!  #Heard

I love the detail in this tune.  You listen to this new cut “Call You Tomorrow” and then try to convince me that they haven’t done all the right things in the production to make this track stand out brilliantly from the rest of so much of the inorganic BS that’s out there in modern day music.  Don’t get me wrong – I ain’t goin’ full old-man hikin’ up my suspenders on ya here – I too like a lot of that same very BS and succumb to that same easy-to-create digitalized vibe just the same as so many of us out there do – I’m just saying when you listen to Heavy AmericA, you know you’re in the for the REAL shit, not the bullshit.

Like a combination of the strength in Black Sabbath, a slight hint of the flash of Van Halen/The Kinks, the solos & guitars of something badass like Soundgarden or Queens Of The Stone Age, with the psychedelic tinge found in the sound & production of something like The 13th Floor Elevators…that’s what you’ll find in “Call You Tomorrow” with respect to what you’ll hear.  Do I dig that?  Hell yes I do – I know I’m not the first to jump onto a cut that I’d cite Van Halen in comparison to…ever really…but this is the right parts of that whole vibe done in the right way, with the amount of real edge & grit it really needs to work for me.  I wouldn’t necessarily call that one piece of the comparison the defining aspect anyhow – truly, you could listen to how “Call You Tomorrow” begins and even consider the opening groove & grind not to be all that far away from something like…”I Am One” that started out the Pumpkins’ Gish long ago, or the comparable approach they took to “Cherub Rock” with the wildness of their guitars the album after.  The point is simply that you might find a snippet here & there that’ll remind you of something similar, and quite likely one of the influences on the Boston-based band in their own listening habits – but in the final mix and the end results, what you hear is always decisively Heavy AmericA.  They’ve always been gifted with an incredible ability to flex a lot of dimension and versatility into their Heavy-Rock vibes, and when it comes time to record, you can rely on them to commit to every second you’ll hear; that’s their standard, they never deviate from it or compromise it, and you’d never get anything less than 100% from them when it comes to the dedication they put into what they do – they like to rock & rock HARD; and their music has continually reflected that over the years of their career.  I might not have heard it ALL…but I do have a decent frame of reference y’all…I’ve been listening to Heavy AmericA for 5+ years.

I think one of the main questions that are gonna be on people’s minds throughout the next decade to come, especially for bands like Heavy AmericA that existed prior to Covid, will be whether or not a band or an artist would have written that particular tune before the pandemic even happened, or did that end up twisting the direction of the music or sound in question.  Heavy AmericA has had a mixed-bag over the years when it comes to the subjects they tend to take on – and while “Call You Tomorrow” sure as hell might echo how you’ve been feeling lately in a shockingly direct & relatable way, I suspect they come by it honestly.  I’ve heard a lot of Covid-influenced tunes lately; I sure wouldn’t blame listeners out there if they added that context to what they hear in this single, it would fit thematically – what I’m saying is, you’re much more likely hearing the honest output of a band that’s always been willing to call it like it really is.  Heck – “Call You Tomorrow” is like my own audible anthem – I’m one of those people that notoriously makes plans with all the best intentions, and by the time arrives, I’m dreading every second of what’s to come, even when it’s the people I know best…I’m just…uncomfortable in my own skin and always have been I suppose.  Anyhow…”Call You Tomorrow” is like what life would be like if I just had the balls to cancel my plans…lyrically, it cuts right to the bone and right off the drop as it begins – “Would it be okay if I called you tomorrow?  You see I’m not okay – I feel a little sick.  It’s just another day of life…in all their evil shit.”  Chances are, you can relate to that yourself.  Sometimes you just wanna pull the freakin’ covers back on over your head and set the snooze button to the Tuesday of the week after – that’s just how we are as humans…like I’ve been tellin’ ya, the facts are that Heavy AmericA has the balls to acknowledge, take on, and tackle important issues like mental health & depression in their own way – “Call You Tomorrow” is a highlight example of that.  Don’t get me wrong, I’m all for it when Heavy AmericA wants to fire up the excitement and entertainment value like they have on cuts like “Motor Honey (Peace)” in the past, but I’m also extremely interested in what they do when they add more depth to the lyricism like they have been on tracks like “Generation Lame,” or this new one here.  The reality is, each time they’ve gone that particular route, they’ve revealed the strengths of a band that’s actually got something valid to say, and the cojones it takes to say it.  “Call You Tomorrow” ends up nearly becoming the bridge between those two worlds in so many ways – has the catchiness of a “Motor Honey (Peace)” without being too murky like the heavy theme of “Generation Lame” took them into…this track sits right in the sweet spot, giving you just enough words to make it thought-provoking, the right melody to make the hooks land with impact, and a groove that really, really, doesn’t wanna be denied by any set of your ears out there listening.  The bass from Budd Lapham is as steady as it gets, allowing the guitars and drums to really add the spark to the music you’ll hear – the guitars from Michael T. Seguin kind of maintain their natural presence up front in the spotlight as the main source of the melody we latch onto…but make no mistake y’all, the drums from Dan Fried put on a virtual clinic for ya when it comes to how to go about contributing to a song, rather than just keepin’ the beat.  In particular, you gotta dig the sound of the man’s ride cymbal in the short breakdown gettin’ that railroad sound into the mix for ya – no joke, it’s a stellar addition to the details that run through the music of this tune.  Seguin’s vocals are on the mark, the lyrics make an impact, the music has personality, skill, and smart structural transitions that’ll keep you fully engaged…and it has clever production that’s seriously top-shelf stuff in pairing with the whole sound they were looking to create on “Call You Tomorrow” – it all stacks up to a solid win for Heavy AmericA on their latest cut – I’d reckon the Rock fans from all sides of the genre will have no problem diggin’ on this.

Find out more about Heavy AmericA from their official pages below!