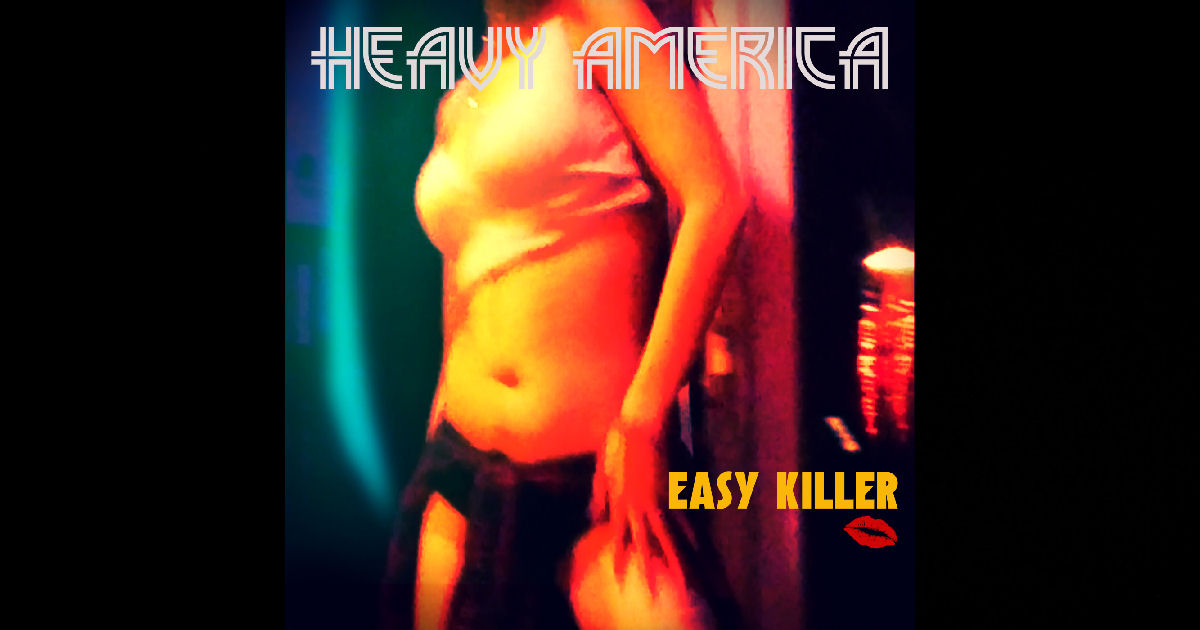 Been nearly two years to the day since we last had Boston-based Rock-band Heavy AmericA on our pages, back when we reviewed their single “Pray For Me” in 2016.  Who knows what the boys have been up to since then…they’re back with a strange one here with their new single “Easy Killer” – I’m kinda perplexed really.  But as confused as I might be, I’m not entirely sure they’re not onto something here…

Perhaps it’s just surprising is all.  Obviously with the passing of time, you always hope as a listener that a band you’ve heard in the past will continue to evolve…and ultimately…I suppose I’d argue that’s what’s happened here.  “Easy Killer” would likely be a track where I’d feel like I’d remember Heavy AmericA later on – whereas a track like “Pray For Me” was a solid Hard-Rock cut, but one that had a lot less identity.  Good cut for sure, but fairly standard too in other ways.  “Easy Killer” goes the opposite route instead, nearly heading into almost progressive dance-funk style at times as this idea twists & transitions along the way…and there’s no doubt about it – it’s Rock with real spirited energy & personality that pulls you in.  I mean fuck, that intro riff alone is freakin WILD man – the hooks in the music make themselves known immediately…like that fuzzy tone to the guitars & bass is as real as real can be – and LISTEN to the lefts & rights and how many subtle additions are made to the atmosphere surrounding them…there are things happening that are seriously off the charts cool here.  And in general…it certainly ain’t like I’m disputing this crazy vibe – it’s fun, just unexpectedly like…on the lighter-side attitude-wise than I was expecting from Heavy AmericA I suppose!  Certainly ain’t nothing wrong with it…it’s insanely vibrant, colorful, and highly imaginative – almost like what you’d imagine a cross between Black Sabbath and Eddy Grant would somehow yield…maybe throw in a bit of Franz Ferdinand/Men Without Hats/Collective Soul-meets-a cement mixer as well…you get the idea – it’s either lighthearted Dance-Rock, or it’s some of that good’n’dirty Pop – you decide.  My biggest question is whether or not people could stick with it on a structural-level; it’s almost one of those things…the flashy hooks of “Easy Killer” are going to draw in a whole crowd of people that are gonna assume this tune might be a lot more straightforward than it really is.  In my heart of hearts, I like to think it’s songs like this that help further the scene and even evolve listening ears out there…it’s got that crossover madness goin’ on that could really appeal to a large audience out there.

Whatever that one like…what the heck is that…it’s like an orchestral sound that’s placed into the melody line on top in the music…it’s absolutely brilliant.  I think I’ve pinned it down though…here’s what makes this track an oddity…and it IS something to do with the structure after all.  I’m thinking if I had to put this cut into a sequence of what made the most impact to the least, it’d probably be something that looked like: verse, musicianship, vocals, tone, and then the chorus…probably much further down the list than I think many would expect after the highlights this cut starts out on.  Those first four elements are more than amazing…that’s half the issue right there and part of the problem in the way for the chorus to stand out…I’m not entirely sure that it does; it’s the kind of chorus that works, I’m just not sure it necessarily furthers this tune or raises the stakes from where this song begins.  Might be an opportunity for Heavy AmericA in that next phase of their evolution, it’s hard to say…they might be missing out a bit on the potential that the song starts with here…it’s hard to say because the hooks in the musicianship literally never stop.  That verse is SO SLICK and full of tight & meaty groove you never want to end that it’s tough to imagine anything coming afterwards wouldn’t have paled a bit by comparison…I mean, this song is so literally stuffed with wild attitude, antics, and stunning sound that everything you hear in the verses and instrumentation are SO STRONG that it’s already good-game long before you even GET to the chorus of this single – at that point, Heavy AmericA has already won you over and it’ll remain that way.  Honestly, I can’t get over how f’n BADASS the guitar/bass combo is on this tune…the tone and crunch is just IMMACULATE, straight-up, full-stop.  Vocals have got tons of confidence & character, the drums are shufflin’ on-point as well – and Heavy AmericA also makes notable time for some killer instrumentation & fun with timing & tempo along the adventure.

Best way I can put it is that…structurally…it’s probably a weird choice for a single when it comes right down to it – it’s more involved than most are, that’s the reality here.  But the facts are the facts too – the groove is way too strong to possibly resist.  Every sound you’ll hear pops so impressively & vibrantly from the speakers that “Easy Killer” really deserves nothing less than an enthusiastic thumbs-up – this is fun with the freedom of expression in music and a real push forward for the band on a creative level.  I don’t think it’s typical (which I like) – and I don’t think it’ll necessarily win EVERYONE over easily (which I also like); but close and if not at first, then soon enough with a couple repeats.  Ultimately, I think it’s a big step in the evolution of Heavy AmericA and a really damn great tune that I certainly hope the people turn right the hell UP – you won’t regret it if you do that’s for sure, I can guarantee you that.

Find out more about Heavy AmericA at their official website at:  http://www.heavyamerica.us