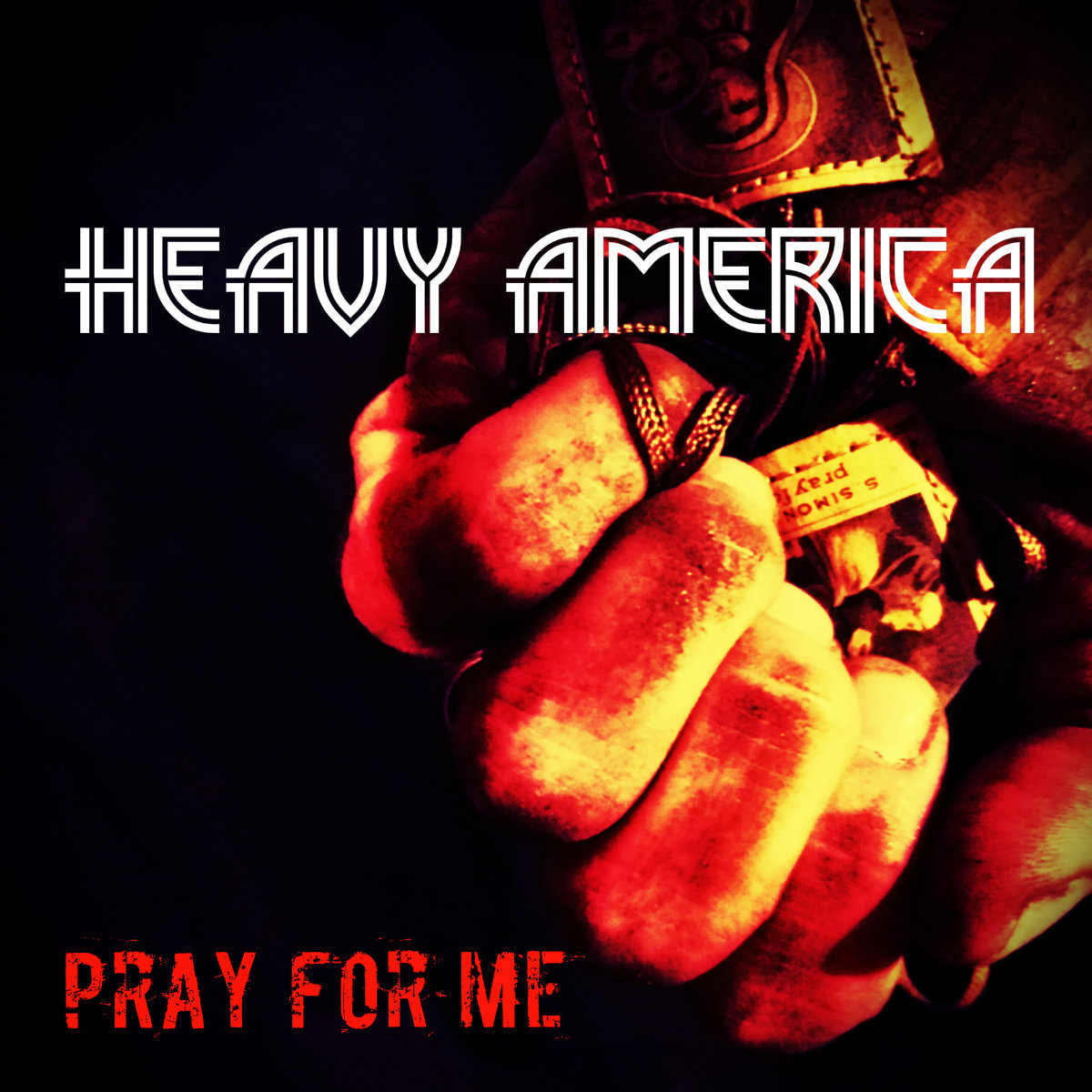 If you’re a fan of hard-rock done right, I feel like you’re on solid ground in selecting this new track from Heavy AmericA called “Pray For Me” – this should be something you dig.  I am…hmm…I suppose these days less and less of a fan of the genre itself, or at the very least tougher on it than when I first started exploring rock of all kinds.  It’s cut & dry for me these days…black & white…I want either something that completely reinvents the wheel or music that is played tightly enough to impress through the core of its ideas and ambitions.  I’m also old enough & wise enough to know we’re not all out to change the entire musical landscape…and a complete renovation or reinvention of a genre is rarer-than-rare when it comes right down to it…I don’t always expect that to happen in hard-rock but you’ll have to forgive me on that second point – because when I’m listening to rock, I do expect it to be focused, ready and able.  Thankfully – I felt like that’s what we’ve got our ears around today with Heavy AmericA – rock done right.

Right from the opening crunch of guitars that crash into the mix of “Pray For Me” – you can hear the meatiness in a solid riff that works…and in my opinion, the guitar-work just continues to build & get more exciting from there.  Seriously solid ideas in the music as they exit the verse into brief instrumental sections before they rock the chorus…I suppose if I had anything critical at all to say about this track it would simply be that I wanted a bit more of those moments – but the reality is there’s only so much you can fit into a short tune and I’ll certainly take what I can get from this crew.  “Pray For Me” is wildly vibrant in performance and execution for its short length…we get just enough of everything to seriously make us want to come back and listen – highly repeatable experience in rock here.  You gotta appreciate that grind in the guitar work and low-end rumble of the bass combining with the crisp snap of the drums – you add in vocals that fit the design perfectly and you’ve got yourself a solid cut like “Pray For Me.”

I will say this…from the snapshot that you get inside of three-minutes – I really did feel like there’s a lot this band could potentially go on to offer.  The breakdown just prior to the 2.5 minute-mark is absolutely freakin’ fantastic…like SO GOOD I found myself seeking out this moment in the song several times as it played on repeat because it’s such a defined highlight in the music before Heavy AmericA roars back into their final chorus run-through.  The energy & intensity is undoubtedly present in the writing throughout this entire song for the record however…doesn’t matter if we’re talking about verse, chorus or in-between – this band is clearly focused and clearly bringing it to “Pray For Me.”  It’s a performance I can appreciate for sure…I like the definition in each part…I LOVED the instrumentation and musicianship and the precision pace & steady stop/start of the beat fueling the energy of this track.  I think you can hear from the musical-hints they drop on this new-single that in a five-minute long track or more – Heavy AmericA would go on to kick ALL the ass with intense solos and wicked ideas.  “Pray For Me” as it stands like this on the recording is a wild-ride for its three-minutes – but I’d be willing to bet that this song finds an extra-gear in a live setting where they really let their musicianship and talent shine even further…but I can’t deny also that I really like the focus that this track has in its short-form now.  Everything seems mapped-out and carefully planned writing-wise, but Heavy AmericA plays it all like it’s completely fresh and they’re all caught right up in the moment of the mayhem & madness of rock…and the result is that “Pray For Me” sounds triumphantly energetic from the vocals to the music and truly on the attack.

And just like a good single SHOULD – “Pray For Me” gets me just as excited about what else might come out from Heavy AmericA in the future as I am to hear what they’ve released here today.  Kind of reminds me of I Mother Earth from their album Dig…and that’s plenty cool with me to have strong sonic elements rampaging through the song like that, yes indeed.  Solid music, tight band, well-written and rock that pounds with confidence – I think they’ve got a strong cut with “Pray For Me” that the hard-rock/alternative crowd out there will definitely dig on.

Find out more about Heavy AmericA at their official Facebook page:  https://www.facebook.com/heavyamerica