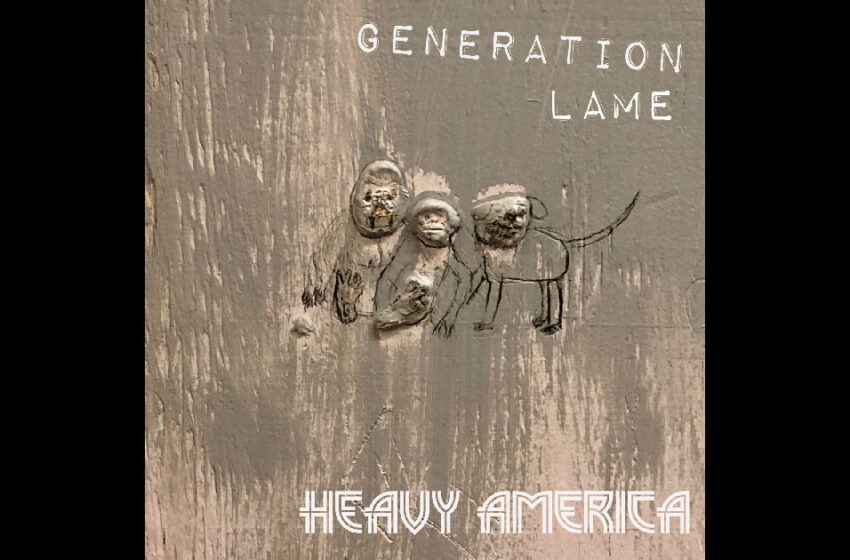 The wheels keep turnin’ and the Rock keeps rollin’ does it not?  Been over FIVE years at this point since we were first introduced to Heavy AmericA back in the day, about mid-December in 2016 with a review on their single “Pray For Me.”  Nearly two years directly after that, we checked out “Easy Killer” in 2018, and in 2019, “Motor Honey (Peace)” – which incidently, is a still a song I can recall to my brain any time I choose just by thinking about it…and like I always say, that tells ya they were definitely onto something.

So even though it’s been about a year & a half or so since that last spin through “Motor Honey (Peace),” when we last left off with Heavy AmericA in these music-chronicles of ours, they were on Rock solid ground.  Ahh…good ol’ 2019…seems like a lifetime away doesn’t it?  The entire WORLD has been shaken since the last time we checked in on this Boston-based three-piece…especially over these past 24 hours.

I think they’ve got themselves another extremely badass cut, and a highly relevant one as well.  I ain’t gonna lie though – I did kind of need the video supporting it to give it a bit of extra context for me.  Part of that could be due to the fact that I’ve only had this song in my hands for a hot minute or so, but part of that reason is also credit to extremely clever writing.  Let me explain…

Ultimately, it would have been easier for me to just say “I get it” – and hope that I did.  Maybe I do.  That’s the beauty of interpretive writing – it can take on many meanings.  Don’t get me wrong, the vast majority of what Heavy AmericA is singing about, and their intended targets, is all pretty damn crystal clear if you were to knock it all down to the very bottom line.  You’d be looking at a song like “Generation Lame” and gain the understanding that, like so many of us, Heavy AmericA is more than frustrated with current day politics and the effect it’s had on our society as of late.  You factor in the mob footage in the video, the politicians signing their souls away for stacks of cash, and the visual intensity of the scenes they’ve chosen throughout what you’ll see onscreen for “Generation Lame” and believe me, you’ll get what they’re putting out there & what they want to communicate on the most fundamental levels you need to understand the core of this cut and their intentions for putting it out.

From there is where it got even more interesting though.  I think it’s only natural that our minds jump to try & conclude which side of the argument they’re really on…and I think they’ve done well to keep that somewhat hidden, despite what might seem incredibly obvious to some.  When you dig deeper, you see specific imagery in the words & lyrics that, in my opinion, will directly conjure up #45 in your minds; Heavy AmericA will quite often reference “the pen” in this tune…for myself personally, that makes me think of all the times I’ve seen Agent Orange hand out a useless Bic to important people surrounding him in the oval office for a photo op – or the references to “tear gas de jour” – how about that?  That ring any bells from any recent events?  Or the use of the word “feckless” – which has often been used to describe (aptly) one particular member of the first family over and over while she advertises Goya beans.  Whether or not all this is subconscious or intentional is almost beside the point; these words provoke imagery in our minds, and we ascribe meaning to them – and in the politically-charged climate that we’re all in, it’s only natural to want to know if they’re writing from ‘our’ side, or the ‘other’ side of the argument we feel like we believe in.  You following me?  And which side is which again?  We’re all friends right?

“Y’all gotta remember, we’re all in this together.”  That line right there is the key to really understanding this whole single and the intentions behind WHY they chose to write it in the first place – and yep, they’re absolutely right.  When you finally connect with that line the way it’s meant, and you really get right into “Generation Lame” – you realize that Heavy AmericA was never out to get one specific side of the argument at all.  This is a far bigger issue that is affecting every part of the machine we’re stuck in.

They’re fearlessly attacking the entire system, doesn’t matter what fucking side you’re on, you dig?  If you’re the kind of person that’ll sell out our rights & freedoms for a chance to line your political pockets – well then brace yourself, because this Bud right here is for YOU.  Doesn’t matter if you’re left or if you’re right, if you’re blue or red, black or white – if you have zero morals, lack true convictions, and have no substance in your soul – YOU are the target, and YOU deserve to get hit by this song with the full weight of a physical punch as you listen to it.  “Generation Lame” is a justified audible assault on the very establishment of politics & foolish behaviors that have brought us to the point we’re at RIGHT NOW – and if that doesn’t make a song relevant folks, I’m just not sure what else could.  And one of THE best things about a song like “Generation Lame” having come out now…is that you KNOW it would have had to have been written at the very least, a little bit before the storming of the US capital yesterday on January 6th – as in, this isn’t some bullshit gimmick Heavy AmericA is rocking here – this is a reflection of feelings, thoughts, and emotions that have been brewing for quite some time, as they have in so many of us throughout this past several (at the very least four, extremely long, and very tiresome) years.  There’s not just a chance you’ll hear “Generation Lame” and feel like you identify with a piece of it – there’s a Rock solid chance you’ll feel like you agree with every point that’s being made along the way; Heavy AmericA highly considered what they wanted to say, how they wanted to say it, and they nailed a great song here that both kind of spells it out completely, yet makes you think about everything they’re communicating as well.  Because you’ll think you get it…and maybe you do.  Maybe I do…maybe I don’t. Maybe I’m projecting…maybe it’s just me…maybe we’re living in paranoid times…because we’ve been lied to, over and over…and those seeds of doubt have grown into a forest within the society we share.

I felt like Heavy AmericA did an excellent job with this cut, and there’s no denying how relevant it is for right now given how much has recently happened & what we’ve all watched, or personally experienced.  Tempo/pace-wise & all that…it’s a bit of a push/pull energy in terms of how it moves & grooves…I’m realistic in knowing how those tend to go over with the masses…which in a word is, slowly…but I’d imagine that the people out there listening will catch on quickly enough, because there’s real substance here.  Sound-wise, they’ve got some really kick ass chops & bold tone on display here…almost part Black Sabbath and part Them Crooked Vultures…hard-alternative, but with a classic edge & brilliant harmonies – you know what I mean, you’re savvy musically-inclined people out there.  I’m a big fan of songs like this that stand for something important – and I fully believe that this one does; I like that “Generation Lame” makes you think, makes you ponder, and makes you consider where your own values fit into this whole scenario driving their latest single.  I have a feeling that after the last twenty-four hours or so, this entire song has likely taken on even more weight & meaning for those out there listening, and rightly so – Heavy AmericA can Rock, and they DO Rock – but they’ve also proven to be quite thoughtful here in the process as well.  Don’t mistake their flashy chops & amped-up energy for mere meathead Rock – they’ve clearly got their heads & hearts in the right place; you’ll know that by listening to the words of their latest single, and by the sheer fact that “Generation Lame” was created with genuine purpose.

Find out more about Heavy AmericA from their official homepage at:  https://heavyamerica.us