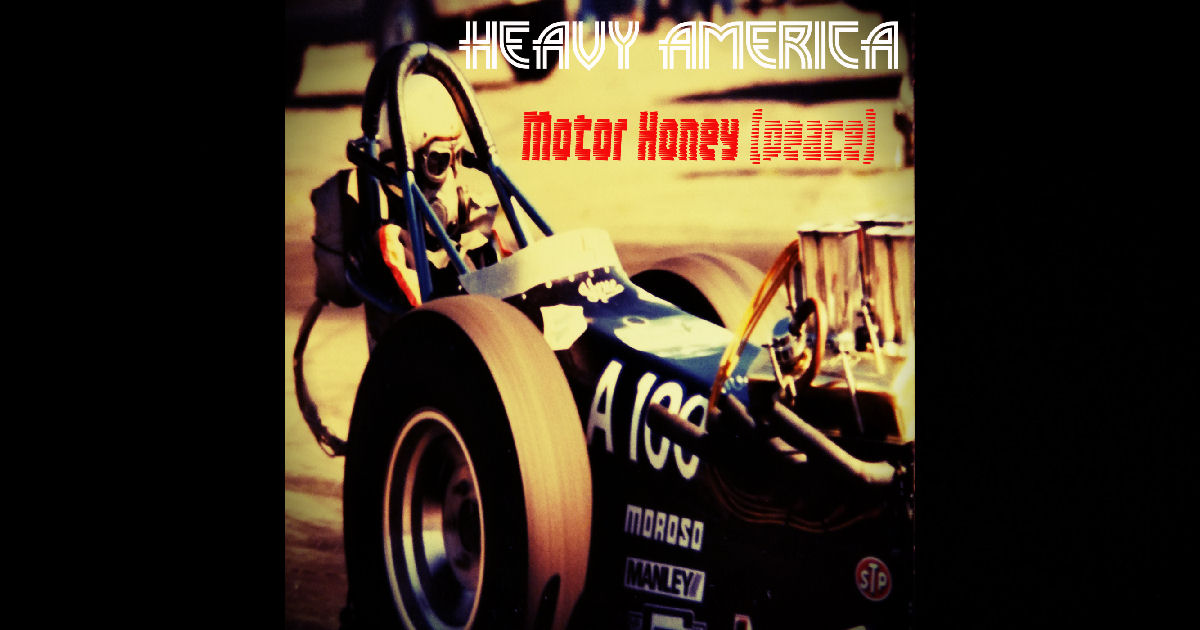 What a rad beginning to the brand-new single “Motor Honey (Peace)” – you’ll get another dose of this awesomeness on the guitars later on in the solo of the song around the 2:15 mark.  Don’t get me wrong, the rest is pretty damn good too…I’m just honestly kind of surprised that Heavy AmericA didn’t write the bulk of the song around a hook so strong – that’s where you hear the most uniqueness in this cut, right in that one guitar part, right off the bat.  Most other bands out there would kill to have even written this one super-sonic guitar-lick themselves, yet Heavy AmericA tosses that to the side pretty quickly in favor of the intense crunch & grind they’ve got goin’ on throughout the majority of “Motor Honey (Peace).”

It’s hard to complain when this Boston-based band is in full-swing…I might want more of that guitar part – maybe you do too – but we gets what they gives us…and we’re entitled to nothing more, nor should we ask.  What they will supply, is relentless energy, solid musicianship & vocals, and impressive transitions as they rock & roll themselves through the intensity of this new single they’ve got here.  For myself personally, it’s the verses that have the most memorable hooks outside of the guitar-work on this tune…or, I mean…that’s likely what’s catching the interest of my ear the most – how about that?  Because I ain’t gonna lie to ya, if we’re actually talking about memorable hooks, then I have to side with the fact that the chorus of “Motor Honey (Peace)” is completely going to be stuck in my head likely for the next month, long after this review’s been posted up for you to read right here at this very moment.  That doesn’t mean I’m siding with this part of the song as the stronger part of the writing, structure, or performance – I’m simply tellin’ ya like it is; it’s got that anthem-style chant of “Motor Honey (Peace)” that’s guaranteed to get ya singing along with it.  Next thing you know you’re turning off your car engine so that you can explain why you were going 100 in a 50 zone to the nice police officer at your window.

The point I suppose, is that, it probably just depends on what ya like in your music – I could advocate for all the parts of this song being your favorite, or hear arguments as to why you’d like one part over the other, and I’d likely agree with’em all.  Personally, I think the verse is exceptional, I think the chorus completely works in what Heavy AmericA set out to achieve with it, I think the pre-chorus shows a bit of a progressive-side to their writing or at the very least a respect for the roots of Rock, and I felt like the instrumentation/musicianship of the entire band at-large really stood out this time around.  Ain’t gonna lie, those guitars still steal the show for me – but I felt like Heavy AmericA on the whole really kept every corner of this Rock song locked down tightly…the mix is on, production is there…all that good stuff is in line, but it’s definitely the band moving so expertly as one unit on this cut through its twists, turns, chops, stops, and starts that makes it so relentlessly engaging, exciting, edgy, fun, and all-out intense.

Yeah man…it’s a crazy thing…it’s always hard to know just how much of what to add or what’s gonna grab the people’s attention.  All I know is there’s like, this really kickass mix of like, Queens Of The Stone Age, Ozzy Osbourne, and maybe something unexpected like early Age Of Electric thrown in for good measure.  Queens for the instrumentation, moves & grooves you’ll find being made in the music – that’s a great example of a band right there that would have KILLED to have created this riff & would have milllllllllllllked it for everything it was worth.  Ozzy for the harmonies & edge you’ll find in the flow, especially in the pre-chorus/chorus – though arguably, we’ve got a much more melodically on-point performance here with Heavy AmericA overall than you’d get from Osbourne in 99% of his material.  And then I say Age Of Electric for their early stuff, cause they had such an amplifiers-up, grandiose-Rock dealio goin’ on that could literally bring partiers right out of the woods to the front of the stage…you could also go with a more well-known comparison in this regard, like Kiss.

Anyhow…what you can always infer from any kind of combination of comparisons is that it’s like all of these things and none of them at all, at the same time; you’ll likely hear things that remind you of other bands or artists, other songs & whatnot – but at the end of the day, Heavy AmericA is no carbon-copy.  They once again firmly establish their rock-solid & rugged durability as a band, and they genuinely sound as inspired & into it as they are at their best on “Motor Honey (Peace)” – heavy AmericA hit this one with the extra gusto from the music to the microphone and get the energy flowin’ on high for ya right from the drop to the very end.  Reliable as ever, Heavy AmericA attacks this single – great job all-around.

Find out more about Heavy AmericA at their official website at:  http://www.heavyamerica.us