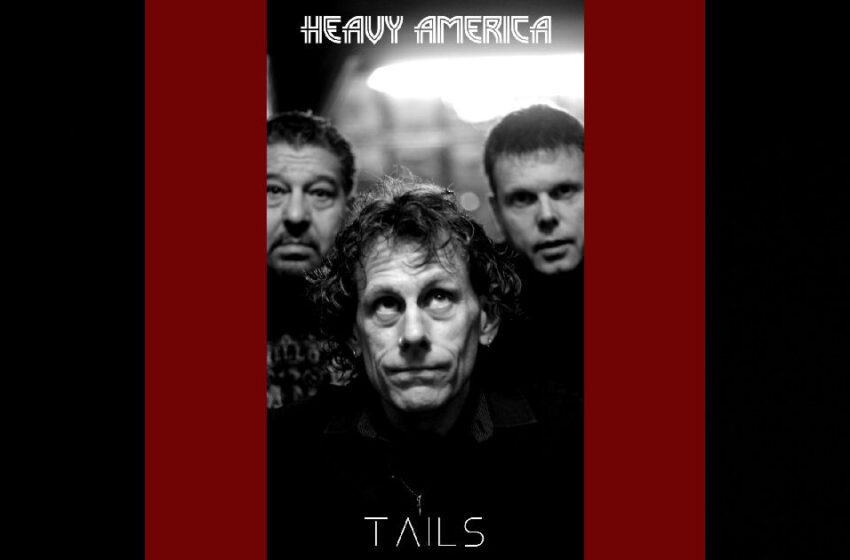 Stellar morning through these speakers so far today – and we’re gonna keep that hot-streak blazin’ with the music of Heavy AmericA and their latest scorching single “Tails.”  Man…like…talk about a killer cut – this three-piece has found a way to get verifiable hooks laced into every aspect of their music & vocals on “Tails” – they’ve created a seriously gnarly single that’s just as cleverly compelling as it is viciously entertaining.  We’ve been ridin’ with Heavy AmericA for nearly five full years at this point in time, tracing all the way back to 2016 in December when I reviewed their single “Pray For Me,” right up to the most recent experience with their music in checking out “Generation Lame” earlier on in 2021 – sounds like these beasts from Boston are revved up, ready to rock, and in a really great space right now.  You know what I mean?  Sometimes you can truly hear when a band is locked right into what they’re doin’ – I’d readily tell ya that it sounds like Heavy AmericA is putting out some of their best this year.

One of the things I think is by far the raddest about this three-piece band is just how unexpected much of what they make would truly be.  As in, I think a lot of people out there would see a name like Heavy AmericA and think they’ve got an idea of what they’d find inside of the Hard-Rock realm, and more than likely be massively surprised to find the depth these dudes can pack into a tune.  When it comes right down to it, the innovative composition of a cut like “Tails” is downright staggering…the kind of song where you listen to it at first and wonder how in the heck they ever got from point-A to point-B, you dig?  You listen to a tune like “Tails” and you know this ain’t the kind of music that’s created overnight.  This takes work…this takes effort…this takes real chops and true grit – and clearly, Heavy AmericA is in possession of all these elements required & necessary to make a versatile groove like you’ll find on this single work convincingly.  The most you’d find me conceding to ya here is that it’s not exactly the most typical single you’re gonna stumble across in that sing-along sense…but let’s be real – I’ve argued against that being the defining factor in what makes a single a single a million times on these pages of ours.  When you hear the radiant appeal of the psychedelically-tinged sound of the hooks that beam outta this track…believe me, you’ll find that interesting = entertaining every bit as much – this is the kind of single that earns your attention through its clever construction and remarkable riffage combined.  Think of it this way…a track like “Tails” has every bit as much in common with a band like Queens Of The Stone Age or Kyuss as it does with rad stuff from back in the day like Strawberry Alarm Clock or Donovan at its core – Heavy AmericA incorporates a kickass amount of its implied heaviness, but also some extremely badass psych rhythms & grooves into this tune that make all the difference in its overall appeal.  Hybrid vibes are where it’s at these days people, that’s the facts – and Heavy AmericA has plenty of’em – sure it’s based in ruthless Rock, but the way they expand their sound to the fringe on tracks like “Tails” is enormously impressive and genuinely bound to make a major impact on those out there that have plugged into an amplifier themselves, sat behind a drum-kit, or sang into a microphone.  Don’t get me wrong…plenty of other people around the world are bound to latch onto this too – I’m simply saying that any musician out there that’s ever written a song would appreciate & respect the amount of effort put into the design of “Tails” and the stunning technique in which they use to play it.

If you think the junk-drawer in your house contained some cool shit, check out the video for “Tails” by Heavy AmericA and marvel at the endless wonders to be found in this mysterious treasure chest will ya?  The band is locked in a room, counting down the days, but also continually finding rad things being placed in the drawer along the way that might potentially help them outta this jam – we’re never really all that sure!  Everything from cold hard cash to a plateful of pills come their way…as to how any of this will help or hurt them while they’re stuck inside their concrete confines, we do not know – but at least it keeps them entertained as they wait out their fate – and keeps us 100% engaged in the process through its visual cleverness.  The actual eating of a bullet was a nice touch…there’s no gun around, but dude decides to take a chomp on it anyway.  All-in-all, it’s as gritty & badass as the song itself is – the fact that Heavy AmericA has already racked up an enormous count of clicks, plays, and views since dropping onto the internet at the end of April is just about the least surprising thing I could tell ya – they deserve the attention for the efforts they’ve put in here from sight to sound.  From the thundering drums of Dan Fried, to the killer rumble of the bass from Budd Lapham, to the extraordinary textures & tones of Michael T. Seguin’s guitars & vocals – all hands on deck here warrant a real shout-out for the badassery they’ve provided our speakers & screens with this time around – “Tails” rocks solid in all the right ways.

Find out more about Heavy AmericA from their official website at:  https://heavyamerica.us