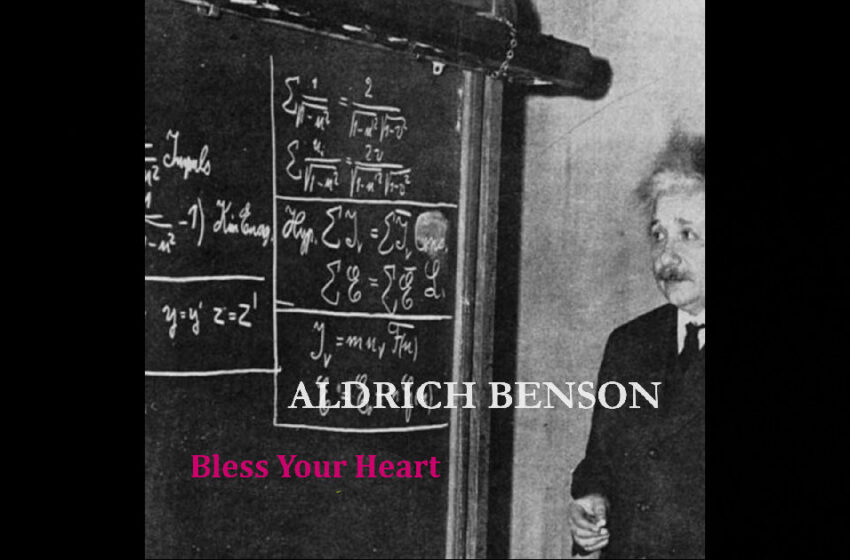 The main question is…are we working with the traditionally sweet definition of “Bless Your Heart” or are we talkin’ about the “Bless Your Heart” so often uttered throughout the deep south – because as far as I understand it, those are definitely two very, very different expressions…

Mike and Bob are based outta Seattle though…so I’d assume that’s not south enough for the sarcastic side of the definition – plus, in general, they’re two guys that tend to dwell much more on the positive.

That being said, you will find a lot of contrast in the lyricism of “Bless Your Heart” that’ll roam through a whole plethora of thoughts, observations, and emotions that sends this track from Aldrich Benson in different directions, some hopeful, some despairing…you get a good range here that provides real depth to the idea overall.  At the end of the day, Michael Aldrich and Bob Benson have made the goals on what they wanna do plenty clear – they’re here to turn up some amplifiers & have themselves a good ol’ time making some music…they don’t have some weird delusions of grandeur, they just hope you’re gonna enjoy what you hear.  In this world I’m livin’ in, that’s the right approach if you ask me – and chances are, you’ll find it’s the most rewarding creatively.  No matter how many times I say it, it never gets old or any less relevant – you do what you do & what makes you happy – that’s what music & art are all about, and the rest is just gravy y’all.  I’ve enjoyed my time with Aldrich Benson quite a bit as a direct result of the incredible attitude & enthusiasm they have for making music – I ain’t gonna lie to ya, they’ve just got a way about’em that pulls you onboard and makes you wanna cheer for them to succeed by whatever definitions they choose to apply.  They’re grounded folks…they know that the songs they create are a bit out of lockstep with the rest of the world in some ways, which is a fair observation to make – but of course, with the many advantages of the internet, we’ve got a whole world of fans around the globe that dig on many styles of music – and if I’ve found several reasons to love Aldrich Benson, I’m quite sure that a great many of you out there will feel the same.  They write good tunes, that’s the reality – and it’s largely because of how different they are in comparison to so much of what else is going on out there in the music-scene now, that Aldrich Benson ends up becoming inherently refreshing as a result.

Which in many ways, “Bless Your Heart” is as well – I just think there’s something about the whole Aldrich Benson sound that stands out, even if I’d probably have this particular single sitting somewhere in the middle of their catalog in terms of the songs I’ve heard & what I love about’em.  The main advantage that “Bless Your Heart” has is within the main hooks of its chorus for sure, and the energy that this duo is able to crank out at the song’s most intense moments in that regard.  To get there, you go through a much more risky mid-tempo vibe that may or may not be enough for the listeners out there to stick with…that’s harder to say – but I’d imagine that if you’re still lucky enough to be equipped with an attention span that’ll allow you to hang out for forty-five seconds, you’ll hit those hooks and keep on keepin’ on from there.  Love the drums & percussion after that first chorus exits…great sound to be found there, and some of my favorite lyrics from this song are right there in that second verse as well – the inventive guitars in the chorus are stellar, and Michael’s vocals bring that mix of wild tone & energy that has always been a massive arrow in the quiver of Aldrich Benson that never misses its mark when he summons the power to hit the heights of the demands the melody & structures place on him.  If anything, like many singers that have seem to summon that superhuman power for their most intense moments and the biggest demands being made on their vocal chords, it ends up becoming the more low-key & mellow moments that might have a note or tone here & there that could potentially have a bit more strength behind it to smooth out the sound – but don’t get it twisted, I ain’t complaining about what I hear from the microphone or the music on “Bless Your Heart” – they’ve done a really good job.  At the end of the day, they’re pretty much battling against their own uniqueness and not a whole lot more – and it’s that same very uniqueness that’s undoubtedly going to lead them to a growing, loyal fan-base of folks that get the vibe they’re going for.  Like I said and like I always say – you do you – the people will come around, and there’s plenty of’em out there on this planet of ours, trust me on that, I’ve done the math…there is…one…two…three…okay, there’s at least more than the ten fingers I’ve got, I’m sure of that.  I’m also sure that math has never been my strong suit now that I’ve written all this out – but you get the idea – there are tons of people out there that, when they DO stumble upon the radiant cuts of Aldrich Benson’s hybrid style, are gonna really dig what they hear & stick around for plenty more.

Production-wise, as far as I know, they’ve put this together themselves this time on “Bless Your Heart” – and they should be proud of just how consistent this cut preserves the whole Aldrich Benson sound we know & love – that’s the main positive here.  Where I’ll advise caution is the ol’ volume knob and how quickly we’re slidin’ it over there boys…some of us like myself, with a healthy dose of grey in our beards, were trained from day one that if you’re creating a fade because that last song on side-A of your mix tape wasn’t gonna fit, you gotta be subtle AF with the adjustment, or you can really end up noticing that instant shift – and I can hear two of’em occur in this mix of “Bless Your Heart” as it is right now, quite clearly.  Not being the brightest bulb in the drawer myself, I always assume if I can hear something, then chances are, others out there can as well – you gotta have those stealth ninja skills when going with a full-on volume adjustment, and there’s an even bigger chance that when you’re reaching for that as the solution to the mix, that there’s an implication that there might be another way to tackle the obstacle overall with some other knob or dial that needs a twist here or there, but might compensate for what you’re looking for other than an extra notch or two of straight volume.  It’s certainly nothing that would stop me from listening to “Bless Your Heart” is now – we’re not talking about anything too dramatic in that regard, just noticeable, and something they’ll wanna make sure to be cautious of as they carry on into the future.  Vibrant stuff overall though…I felt like “Bless Your Heart” really came alive in the chorus and instrumentation throughout its brightest moments & raised the stakes completely from the low-key approach to the verses…lots of BIG colorful sound comin’ atcha – and we’ve all got room for that on our playlists somewhere, don’t we?  Another solid cut to add to the catalog boys; keep it up Aldrich Benson!

Find out more about Aldrich Benson at their official homepage at:  https://aldrichbenson.com