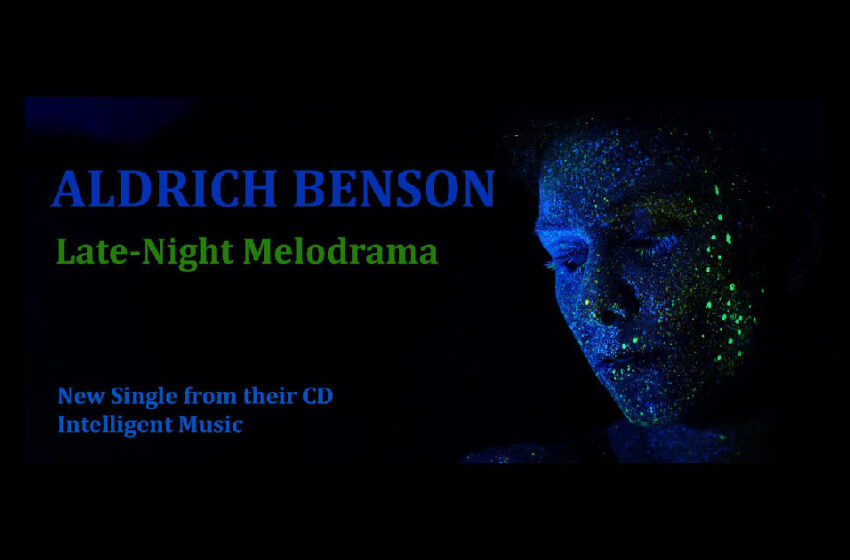 One of the toughest things I’ve learned throughout my time spent in music is that the perception of what artists/bands love, versus what we love, often has the space of a clear country mile in between.  In a sense…it’s kind of natural in the sense that we all hear different things & respond to music differently than the next person beside you will – but it’s always strange when you know you’re coming up against what they might perceive to be the ultimate single.  I knew the enthusiasm existed before I even listened to “Late-Night Melodrama” and that Aldrich Benson were big-big fans of this particular tune.  They’re not wrong to feel that way – it’s a good tune!  Is it ‘the’ single?  No – but it is a solid cut for sure.

There are many accessible hooks and there’s a whole bunch of universal vibes at work here…and in that regard, it’s definitely not too strange to think this would have been one of the tunes they were willing to back & promote first when the songs of Intelligent Music were first being put out back in 2019, long before it got the official remixin’ via producer Stuart Epps for its re-release in March of 2021.  With its gigantic drum beat and the appeal of the melody in the chorus, there’s no question about whether or not “Late-Night Melodrama” would find a ton of ears that would be willing to listen – I’m simply talking about perception here is all.  It’s the very reason that bands & artists take on the ol’ A&R guy – as creators, we’re entirely way too close to the material to ever be as objective as we’d need to be – and if there’s anything I’ve learned over these years of mine, it’s that the favorites of the artists & bands almost never – repeat never – match up to our own in-full.  “Late-Night Melodrama” is a good tune, yes – but it’s still a distant third behind the subtle addictiveness of “Middle Of The Night” and an even further distance behind “She” – which I’d probably go down hard swinging & claiming is still their most single-worthy & standout cut from the set-list that I’ve heard to-date from the Intelligent Music EP.  That doesn’t mean that “Late-Night Melodrama” doesn’t have plenty to offer ya – it does – and just because it was released earlier back in the day prior to any others in the lineup doesn’t necessarily mean they thought it was their strongest cut either…a lot of artists/bands will toss a lay-up before they really start shootin’ & provide ya with a song that’s gonna get you interested, but not close off any other avenues later on.  As in – sometimes when you put out your best first, there’s nearly no other way to go but down from there – and quite often, the savvy among us will hold back a lil’ somethin’ special for singles two & three instead…which could very well be the case here too.  But if we’re talking about what grabs the ol’ attention out there…or at the very least, over here where I’m sitting…you can’t beat “She” for the sheer amount of personality & radiant punch that flows through the microphone, or the subtle charisma in the hooks of “Middle Of The Night” – “Late-Night Melodrama” holds its own, but it doesn’t quite possess the full strengths or spirit that either of those other two cuts seemed to have.  Still entirely enjoyable, still cohesive with their catalog…but if I don’t just tell ya like it IS, then what am I even doing here?

Strong positives in the mix would include elements like the stellar keys from Bob & the vibrant atmosphere you’ll find set up here from the very beginning…and those drums continue to be a big stand-out when it comes to this tune.  Guitars & bass are on-point, and the structure itself is one that still speaks strongly on behalf of this duo’s ability to create music with multiple gateways into it.  Like for me, the main hook isn’t actually the whole chorus – that’s a solid hook in itself, yes – but it’s actually the final twist Michael puts into the last line of it that makes it land with the most impact.  I am curious about the decision to have the man so wet with effects in that opening verse and then not have that later on – though I highly suspect that’s simply the realization that Aldrich isn’t a man that really benefits from a whole lot of that stuff.  His voice on its own, is remarkably powerful, and he proves throughout this entire song that the moments where he sounds his best are the ones where he comes through the mic with his most natural tones intact.  Guitars & instrumentation are freakin’ fantastic in this single…if anything, I kinda wanted a few more moments where we got to dig into that a little more…like around the two-minute mark, you’ll find a brief spot there where you get the full flavor, and it simply makes me want a whole lot more of it.  You get a little in the intro and at the end…but with the skills these guys got & the chops they have…it felt like we could have used a real highlight of their instrumentation & musicianship in the spotlight here too, which almost felt harder to reach in comparison to the cuts we’ve experienced in the past as well.

What you won’t find is Aldrich Benson dropping the ball when it comes to the overall professionalism & passion you’d expect to find from them – “Late-Night Melodrama” is fully loaded with both of those ingredients for you to dig on – and like I said from the get-go here, it’s still a high-quality cut all-around, 100%.  It’s in our nature to compare songs that come from the same record, artist, or band – and heck, that’s what I do here ain’t it?  The only way I can ever really establish any credibility with y’all to begin with is to be bold enough to call things as I hear’em without any kind of filter…honest feedback, as best I can provide anyone with to my abilities…so if I’m tellin’ ya I personally enjoyed cuts like “She” or “Middle Of The Night” more…I mean…is that on me, or is that on them?  I didn’t create this array of awesomeness to choose from – they did, I swear!  I like what I hear…don’t anyone out there get it twisted…just because any of us like one tune over any other never implies anything is necessarily bad in any way, shape, or form at all really, ever – for some of you out there, “Late-Night Melodrama” will be entirely your jam, and I’d support you completely in that decision!  I mean…I’d obviously have a long conversation (like, really, really long) about “Middle Of The Night” and “She” with you right afterwards in a good ol’ fireside chat, but yeah, make no mistake, I’d still support your choice.  We all love what we love, and we all respond to what we connect to – it’s one of the beautiful things that make this world go ‘round – and this track is still another addition to their catalog they should certainly still be proud of.

Find out more about Aldrich Benson from their official homepage at:  https://aldrichbenson.com