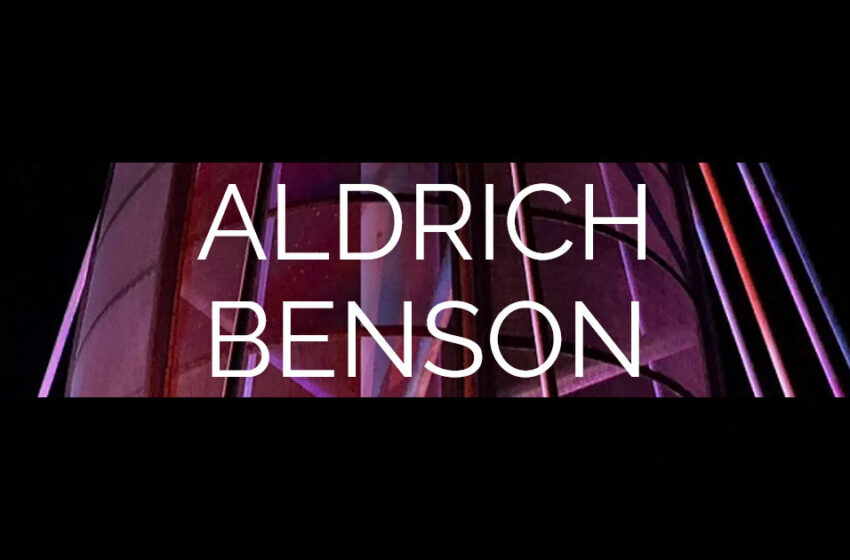 Aldrich Benson – “Be The One” – Single Review

…there are two dudes somewhere over there on the west coast right now, wondering…how IS this gonna go today?  So far as I’ve written about Aldrich Benson’s music here on these pages, like I did yesterday in reviewing “She” – I’ve been commenting on songs that have had Michael Aldrich on the mic manning the lead vocals – and this time around, we’re digging into a track from their Intelligent Music EP that features Bob Benson at the helm.

So I’ll start this in the middle of the road…because I don’t wanna give it ALL away right here at the very beginning of this article…and I’ll say that hearing a Bob driven tune still fits cohesively with the Aldrich Benson sound, though there are of course, discernable differences in between their own vocal styles.  Gotta let that good ol’ tension BUILD right?!?  That’s how we do this whole writing thing we do here…

My usual reaction is more than mixed to the dual-singer thing – but to be fair, in most circumstances the real issue is never to do with the different sound of a voice, so much as the direction of the writing…to me, that’s where the problem always ends up revealing itself.  I think immediately to records by bands I personally grew up listening to, like Treble Charger, Barenaked Ladies, Age Of Electric, and Goo Goo Dolls to name a few…these acts all attempted having two singers and the results were always scattered.  The inherent risk is that usually, in the majority of cases out there, we end up latching onto our favorite one of the two, and those instantly become our favorite songs on those records.  For example…probably one of the most recognizable names on that list above, Barenaked Ladies – I love everything about the songwriting & sound of Steven Page’s voice…and I pretty much can’t stand Ed Robertson’s stuff.  Hence now that band split to pieces long ago and tossed Steven, I’m relegated to being a fan of their earlier stuff and that’s how it’s always gonna be.  Goo Goo Dolls, I don’t listen to anymore really at all, but same idea there – I liked what John tended to write, and I absolutely couldn’t stand any of Robby’s tunes that I can recall.  The other two minor examples I pulled off the top of my head I didn’t mind as much in that same regard, but I still ended up feeling like I had my favorites.  I’d side with a Greig Nori song over something by Bill in Treble Charger almost every single time, and with Age Of Electric…well…I fan-boyed out on the lead-singer Todd Kerns so hard that I carried gum he spat out into the crowd – which I caught – in my wallet for about five years, no lie.  It took me years & years to appreciate what singer Ryan Dahle brought to their tunes…but really, nevermind that at all – he went on to be in one of my all-time favorite bands & taking a role straight in the spotlight with his bro in Limblifter; he’s been aces to me ever since.

In the context of comparison, Aldrich Benson seems like they’re once again on really solid ground.  While there’s no doubt that there’s a different flavor & feel to this particular slice from the Intelligent Music EP – make no mistake, it still fits smartly under the umbrella of hybrid sound & style they’ve been aiming for.  With the versatility you find in their music, it’s actually remarkably easy to get right into this Bob-led tune…we accept it naturally as listeners & fans of their music, because they’ve put such an array of ideas on display already to this point – we almost expect that each experience will be totally different than the last, and that plays significantly to their advantage in this switch between lead-singers here.  Plus I mean, let’s be real – Bob’s got exceptional hooks goin’ on to fuel the chorus of this song, and while it might not be Michael’s live-wire approach to vocals, he brings in a whole dimension of depth to their overall catalog and offers a range of shifting moods & emotions through the way he sings, and it works out really well.

Ultimately I think two things can be, and are true, when it comes to “Be The One.”  On the one hand, we’ve got what might even arguably be the most accessible hooks they’ve put into a tune so far on a universal level since “Middle Of The Night” with what you’ll find at the heart of the chorus on this cut – and on the other hand, you’ve got the push/pull energy of a mid-tempo tune, which is essentially always an uphill battle when it comes to the masses out there.  Not you dedicated music-fans out there…I’m not talking about those of you that dig real songwriting and following a band down the rabbit-hole to wherever it leads – you’re all cool, and I know you’d ride with a song like “Be The One” without hesitation.  It’s the rest out there, who seem to feel like music with anything less than an up-tempo beat or a super-slow melody can’t offer anything in between…which is of course, 100% craziness.  Commercially-induced madness really.

So in terms of the main differences between “Be The One” and the rest of what we hear in Aldrich Benson…how we’d react to it & all…it’s not really so much about the fact they’ve switched from Michael’s lead to Bob’s here, so much as they’ve also attempted a more substantial adventure in sound in the process at the same time, which progresses much more like a great story does in the sense that you get this revealed a chapter at a time as it plays.  For me, I could sit & listen to a track like “Be The One” all day, every day and be fully satisfied by the magnificent way this song unfolds & develops along the way…but as for the short attention-spans of this world…well…that’s where the risk of a mid-tempo cut always comes into play, no matter who you are or what band you might be in.  In my mind however, I think Aldrich Benson gives you EVERY reason to want to listen, and right from the very start.  You’ll get a nearly tribal-style intro from Michael in the distant background as the song begins to take shape – then you get that hit of the brilliantly smooth bass-lines you’ll find are a signature part of this band’s greatest tunes, really smart additional instrumentation like violin sounds, which I assume are coming to us via Bob’s excellent keyboards…and then of course, you get to meet Bob himself in a whole new way by being introduced to his voice & the uniqueness it brings to Aldrich Benson.  Michael comes in throughout the song to lend his own talents to the backing vocals and strengthens the intensity of the hooks by adding in a contrasting style – the more they continue to explore this, the more we’ll be loving it all.  Far too many times you get similar styles between two singers in a band in their tone & approach when doing a lead & backup thing…but these two complement each other in that way you wanna hear, where each personality still stands out on its own, and in tandem, creates an even more gripping result.

I look at it this way…they had a choice to make here, like they will with all of their tunes and two highly capable & competent lead-singers with their own defined styles.  Could Michael have sung “Be The One?”  Of course the answer is yes.  Would he have gotten out of it what we hear from Bob though?  That’s the real question – and quite honestly, the answer is probably 100% no.  That’s not any kind of a knock against the guy whatsoever – I love what Michael brings to a microphone – the point is that as a band, together, they realized that the best method of getting the most out of this particular cut, was to go with Bob at the helm on the mic…and they made that call, unified as a band, knowing it was the right one for them to make.  It’s THEIR music after all folks…and if anything, bands with two potential leads prove that point to the nth degree – it doesn’t mean you’ll always find an even split between them on any given record, but the smart ones that do it right like Aldrich Benson is, find the right person, for the right song.  While it might not be as neon-bright as the vibes we’ve experienced in the Michael-driven tunes so far from the Intelligent Music EP, the depth of interesting slow-burning sound & atmosphere in the performance of “Be The One” has its own genuine appeal, and the advantage of strong hooks that’ll definitely get people singing along with the melody of the chorus.  Bob’s more than held his own here; and between them both, they’ve created an entirely new set of reasons to dig on what Aldrich Benson does.  Plus it’s produced once again by Stuart Epps, so c’mon now y’all, you KNOW it sounds good if it’s got his stamp.  “Be The One” might not be the very first cut to stand out on Intelligent Music due to its weighty sound & mid-tempo pace…but this is the kind of track that holds up, and keeps us coming back.

Find out more about the music of Aldrich Benson at their official website at:  https://aldrichbenson.com

Tags: Aldrich Benson Be The One Singles sleepingbagstudios