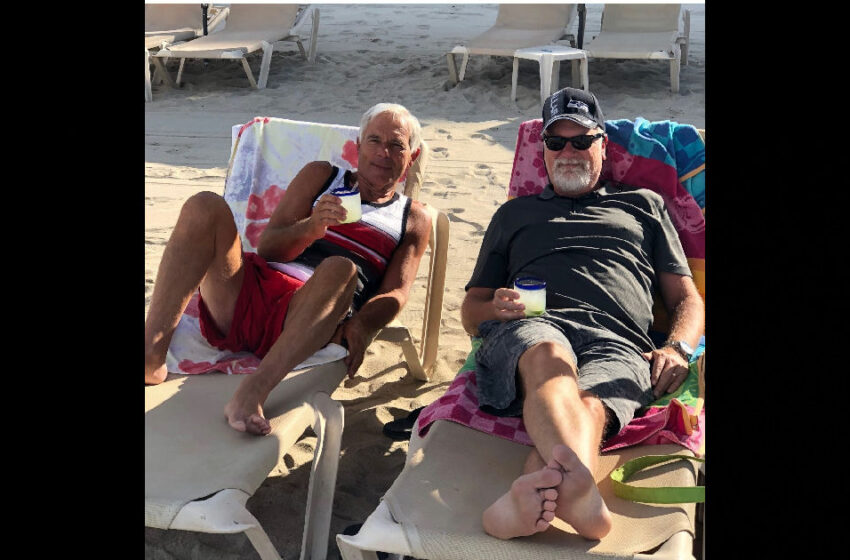 You’ve heard at least one of the reasons why I love these guys in the previous review of Aldrich Benson’s song “Middle Of The Night” posted up today – and if you look up top, now you can SEE one too.

I’m sure they’d be the first to agree & you would too – this ain’t all that bad for a couple of ‘old fellas’ – right?  Pffff – whatever!  You young punks couldn’t hold a candle up to what these two can do.

Don’t let the pictures fool ya – Aldrich Benson rocks with the passion & punch of a duo in the prime of their twenties – but you certainly can’t mistake the precision & professional sound that they have in their music, which can only come from years of the true grit of experience, commitment, practice & dedication.  I’m no longer at an age where I could afford to be ageist even I wanted to be, which I never have for the record, but you get the idea…I’m hoping these two are a glimpse into ALL of our futures, and inspire the living daylights outta ALL of you listening out there – it’s NEVER too late to do what you love.  Time itself might become a more precious luxury of course, it does for us all – but the reason WHY I’m mentioning any of this at all, is completely for the fact you can hear these two aren’t in the mood to be wasting a single second of whatever they’ve got left.  And NO…they’re not ancient – they’re far from it, with many years ahead of’em still…and the results they’ve tapped into through the electrified-vibes of their new Intelligent Music EP should encourage them to keep on goin’ forward from here.  “The City” is another excellent dose of absolutely stellar focus & musicianship that has these guys rockin’ to their maximum power & potential.  Once you’ve heard it, it’s okay…you can admit it out in the open just as freely as I’ve been getting at here in beating around this bush – you didn’t expect it from them, did ya?

They might look super chilled out in the photo above, but make no mistake folks, when it comes time to push record, these guys are as serious as serious can be about getting their best into their material.  I was already convinced by what I’d heard on “Middle Of The Night” earlier on, clearly – if you haven’t read that review yet, click here and you can head straight over there next – but in the event that you weren’t somehow convinced along with me already…first of all, your ears are broken, and secondly, “The City” should be all the confirmation you’d require to know I speak nothing but the TRUTH y’all, 100% and ALWAYS.  If I’m tellin’ ya something seriously JAMS…I mean, in my opinion, you can take it to the ol’ bank & cash it, quote me directly – chisel it into a stone tablet if you wanna – I’m not here to waste any of your time, including Aldrich Benson’s – and clearly they’re not hear to waste ours either.

I’ve had moments in listening to these guys play through “The City” where I’ve felt tiny moments of comparisons that could be mentioned from Van Halen to Ozzy, from BTO to Doug And The Slugs, from Eddy Grant to Thomas Dolby, and just about a million things for a second or two in between – but when it comes right down to it, I really give both Michael Aldrich and Bob Benson real credit for finding the right magic that works for them fully.  We’re all a sum of our inspirations & influences in so many ways – and I gotta say, it’s nice to hear how it all stacks up into the totality of what this duo is beamin’ outta their amps from way over in Port Angeles, Washington, where Aldrich Benson is currently based out of.  You’ll notice common threads that exist between the comparisons I’ve chosen to cite here though, however brief they may be & unofficial they truly are – the facts are that, what each of them bring to the table is pure personality, professionalism, and a supercharged charisma that can’t be denied – and that’s exactly what you’ll find on display in songs like “The City,” and certainly within the band itself.  PICK SOMETHING folks – whaddya wanna talk about?  Guitars?  Amazing!  Vocals?  Outstanding?  Keyboards?  Essential.  Rhythm section, tight as tight can be, solos are intensely loaded with an off-the-charts level of cool, songwriting, structure, performance, production…you simply cannot ask more out of either of these players than EXACTLY what they’re givin’ ya – and I’ll be damned if it ain’t all more than impressive!  They’ve got themselves the quintessential definition of a Rock song in full bloom with the wild dynamics and all-out performance they put into “The City” – this is a sound that never goes outta style or even remotely loses the flashy allure that draws us towards it – but it’s the way that they rock with such spirited passion that’ll always keep it relevant.  “The City” doesn’t just hold up to the most intense critical scrutiny, it’ll hold up spectacularly well over time & repeat spins, I guarantee it.

Make sure to keep these guys in mind for the upcoming sale on March 5th for the ol’ Bandcamp Friday next month – but don’t let that stop ya from picking it up right NOW either; Aldrich Benson rock in an extremely compelling way that’ll keep you listening from start to finish without hesitation & happy to do so – they’ve proven it in the two singles I’ve heard, and I can’t wait to hear the rest of their new record.