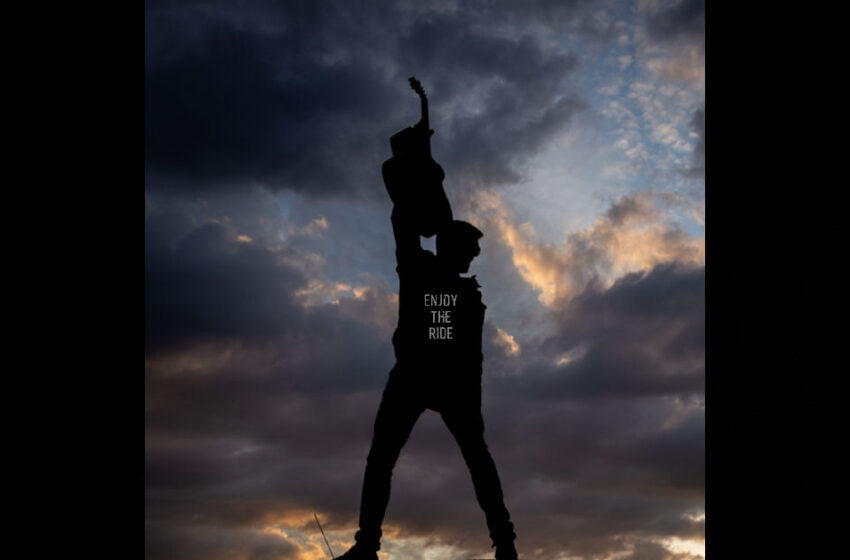 With just how awesome things have been going for Steven Faulkner as of late and the sheer rapidity of his creativity…I was starting to wonder if the man was ever gonna come up against some real scrutiny again for a hot minute there!  Over the course of the last several singles he’s released this year, including the pepped-up & Alt-Pop-laden “Only At The Start” and the compelling songwriting he put into “Call Home” – and just about everything in between & surrounding these tunes, right back to his Love.Fury.Remorse.Vengeance EP of last year…he’s kinda been crushing it…like…a lot.  Much more than he had been in the years beforehand, you feel me?  It’s been clear that Faulkner has been dialed-in tightly over this past 365 or so…as much as it might be hard to admit, some of us have thrived in the pandemic era; isolated times have treated this guy very well when it comes to his music and art…or at least, so far…  We all gotta “Enjoy The Ride” while it lasts, because it ain’t always gonna last forever.

I suspect…this cut is probably more for us hardcore Faulkner fans…I’m hearing a tougher sell when it comes to the masses out there, and part of me is convinced that Steven fell in love with that synth hook maybe a bit too much here, trying to figure out something that he could pair along with its neon awesomeness.  I’ve made myself plenty clear in the past already when it comes to the music of this chap right here – I don’t think there’s gonna be a time for me personally where I wouldn’t happily sit & listen to another new song by Steven Faulkner – as plain as I can say it, he makes a style of Alt-Rock that really resonates with me, and resembles a lot of the music both he and I clearly grew up on & still love to this very day.  So don’t get me wrong – do I still like “Enjoy The Ride?”  Heck yeah I do!  Is it my favorite Steven Faulkner song?  Nah.  But it’s a good tune!  It’s got solid crunch and great spirit.  Will it be easily received by the masses out there listening?  Much harder to say, but my gut tells me there’s a strange vibe in the music here that’s gonna make this track have a bit harder time climbing uphill than its upbeat demeanor & positivity-infused lyricism might be expecting…and I’m not even 100% sure I can put a finger on why that is, or the reason that could be.  Is it the drums?  Is he doing too much there?  Or maybe not enough in the rest somehow?  Is it maybe that the hooks haven’t come out quite as strong in this song – or is that simply a comparison we naturally make to the rest of the stellar music he’s been dropping this year by default?  Honestly, I kind of feel like it’s both all, and none of these things at the same time…I never really felt like I could fully pin down what it is I think would stop this new single from Steven from reaching the ears it deserves to, other than the strength & quality of his own previous material.  Ultimately – shouldn’t everyone out there feel the same way I do…that it’s just great to have him back in action and in your speakers each & every time he shows up again?  Even as a fan I’d admit, I can “Enjoy The Ride” for sure…but I’m not fully convinced it’s got the lasting power as so much of the rest that exists in this dude’s catalog.  Time will tell on that of course, it always does – new music can fool any of us in that regard, and does often – our ears naturally rebel against different things, unique things, artistic ideas & such…but quite often, what we think we might not even like at first can become ravenously addictive, unexpectedly.  Obviously as a critic I’m supposed to sit up here on my high horse and tell you I’m never wrong – but let’s be real here – music can surprise us in a million amazing ways and I’m not above admitting it when I didn’t get something at first, and did later on.  It’s natural.  Do I think that’ll happen with “Enjoy The Ride?”  Honestly?  Nah.  I feel like I’ve got a real good bead on the music that Faulkner makes and when it’s gonna find that connection with the people out there – “Enjoy The Ride” has stellar energy and positivity flowing through it that’ll hook in a bunch of folks like me for sure, but he might have left a few of the rest of ya behind a lil’ bit when it comes to this particular single.

I end up comparing Steven to the band Feeder quite a bit…both for the sound of his vocals & accent to my Canadian ears, and generally speaking, for the style of the music he makes as well – tons of similarities, and ones he should be proud of.  “Enjoy The Ride” would be another track I’d be inclined to cite that comparison for – maybe even more-so this time around, because not only has Feeder made a ton of incredible songs, they’ve also made a ton of just really good ones too.  Stuff that I’d happily listen to over the majority of what I end up listening to, even when they’re at 90-95% of their sum-total of audible awesomeness – and that’s a lot like what “Enjoy The Ride” was like for me to experience.  I did enjoy it – Steven offered, my ears accepted – but yeah…still something about its rambunctious design that I feel like could have it in for a real battle and debate when it comes to the court of public opinion; ultimately I think everyone out there will enjoy it – but whether or not it’ll be one of their favorite tunes by Steven Faulkner, or last beyond the heat of the moment in this summer of 2021…time will truly tell.