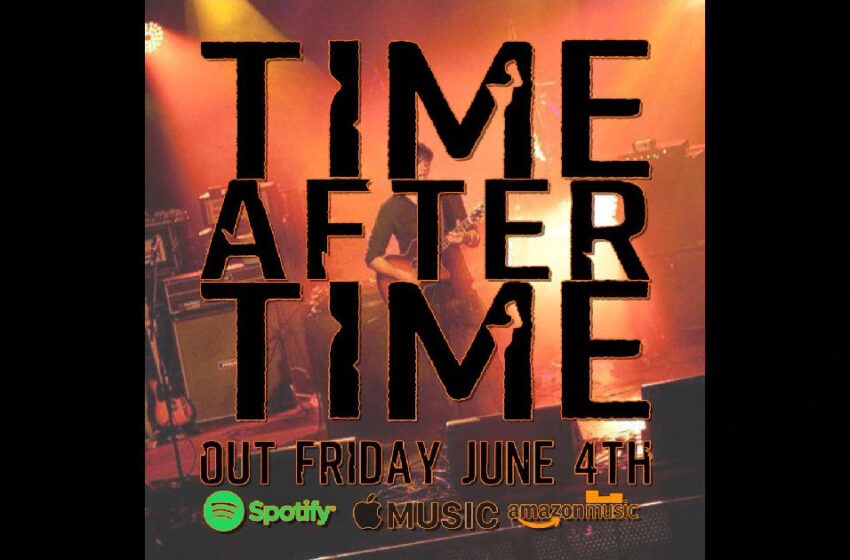 Normally…at least, based on my experiences in the past so far, I always look forward to a new song by Steven Faulkner.  If you’ve been reading my thoughts on this dude’s music over time, you’ve read a saga about how he’s become a reliable force in music that started out with great ideas, and has purely evolved into a one-man machine that is capable of incredibly organic Alt/Rock vibes & all around stunning creativity.

But this…this terrified me.  Mind you, this was long before I’d pushed play on this new single…

For you see dear readers, dear friends…a title IS capable of inciting fear and anxiety if you’re not careful.  As I scanned my list of what’s ahead of me this week…there it was – “Time After Time” – and I doubt there’s a single solitary one of us that wouldn’t be expecting to find yet another cover of Cyndi Lauper’s megahit…and I need another one of those like I need to hear someone’s ‘exciting new rendition’ of freakin’ “Nessun Dorma,” or someone else covering “Bring Me To Life” by Evanescence – as in, I don’t.  Like…I cannot stress this enough…I really, really don’t.  With Steven having successfully covered a Depeche Mode track in the past with his version of “Enjoy The Silence” – I figured him taking on another cover wasn’t all that far of a stretch of the imagination, even Cyndi Lauper.  Heck, The Gandharvas did it back in the day and somehow beat the odds to make it work, so maybe I wasn’t going to hate this.

…and so with MASSIVE TREPIDATION…I grabbed my mouse, proverbially ‘sacked up’ and clicked the play button…& thank the Lord almighty, or whatever it is you pray to – this wasn’t what I was expecting at all.

In fact, this has nothing to do with Cyndi Lauper.

The mercy of the universe has indeed, provided us with an ORIGINAL tune by Steven Faulkner – and I’m mighty proud to say “Time After Time” is a continuation of the hot-streak he’s been rolling on with his newest material as of late.  I am a big, big fan of this man…and the fact that he’s spared me from another Cyndi cover might even make him more of a hero to me…no disrespect to Lauper, she holds her own in the songwriting realm & in music’s history, I’ve just kinda been there & done that all too much.  Faulkner’s last single “Only At The Start” was easily one of my favorites in his catalog to-date, and the last full EP I reviewed from the guy called Love.Fury.Remorse.Vengeance. was another huge highlight/milestone achievement in his evolution as an artist as well – to hear him hitting his stride right now has been an exceptional treat.

In my humble opinion, one of the most overlooked bands of the past century has been Feeder – and Steven is nearly a dead-ringer for that UK-based behemoth on his own here throughout “Time After Time” – he’s latched onto that uplifting, energetic & wildly melodic Alt/Rock vibe perfectly…sprinkle in a bit of the ol’ Foo Fighters for the way the drums get intense at the end of the chorus, and voila – you’ve got something close to what Faulkner is rockin’ here & the addictive power it would possess.  It’s every bit of an anthem to the purity you’ll find in the underground scene as it is a tale of empowerment for one & all; there’s been a noticeable trend in independent music right now that is fueled by the inspiration of our re-emergence.  We’ve all been locked inside too long…and what you’re hearing right now rumbling through the currents of the independent scene, this single here included, is strong enough to shake the walls & break the doors down as we flood out of our isolated times and back into the clubs & concerts we’ve missed so very much.  Listening to a track like “Time After Time” has me missing live music like you wouldn’t believe – and serious credit for Steven for making me feel that way…it’s the fact that he’s found a way to harness such riotous energy on “Time After Time” and give it that live-spark at the core of its inspired sound that has me missing the concert scene big-time right now.  Can you imagine this guy rockin’ this song for a massive crowd of people fully stoked to be back out there in the open with great music to listen to?  C’mon now…a song like “Time After Time” was MEANT to be played for the people – LIVE!

In any event, I’m really digging this surge of positivity that seems to be spreading rampantly throughout the scene we share – artists like Steven Faulkner sound like they’re ready to attack this next chapter with everything they’ve got, and it’s genuinely inspiring.  For real – listen closely to the words of this tune and you’ll discover its unmistakable uplifting attitude…if you somehow miss it in the verse & chorus, believe me when I say, you can’t miss it in the final bridge around the 3:05 mark – that’s where Steven lays it all out as clear as day from behind his filtered vocals, and proves that his inspired sound provides real fuel for the soul.  All-around, he sings and plays this song with the resounding conviction & commitment you truly wanna hear…I’ve been tellin’ ya folks, he’s surging right into his prime right now.

Tightly performed & produced, and cleverly conceptualized – Steven’s waged a battle on behalf of sanity & happiness, and he’s winning the war with an onslaught of addictive sound that never quits on its ability to keep ya fully engaged in its content as much as it’ll keep ya completely entertained while you consider his insightful words along the ride.  “Time After Time” was a riotous delight in every possible way – I’ve been cranking this right up to the rafters loud & proud since I’ve had it, equally stoked about the strong evolution that Steven Faulkner’s music has been making, as I am about everything I hear in this new cut.  Nothing I’d change, no complaints from me – Faulkner’s a sonic fireball of energy & a positive force to be reckoned with on “Time After Time,” and it sounds freakin’ great!

“Time After Time” drops online officially tomorrow on June 4th – make sure to stay up to-date on the details & learn more about Steven Faulkner at his official website at:  http://stevenfaulknermusic.co.uk