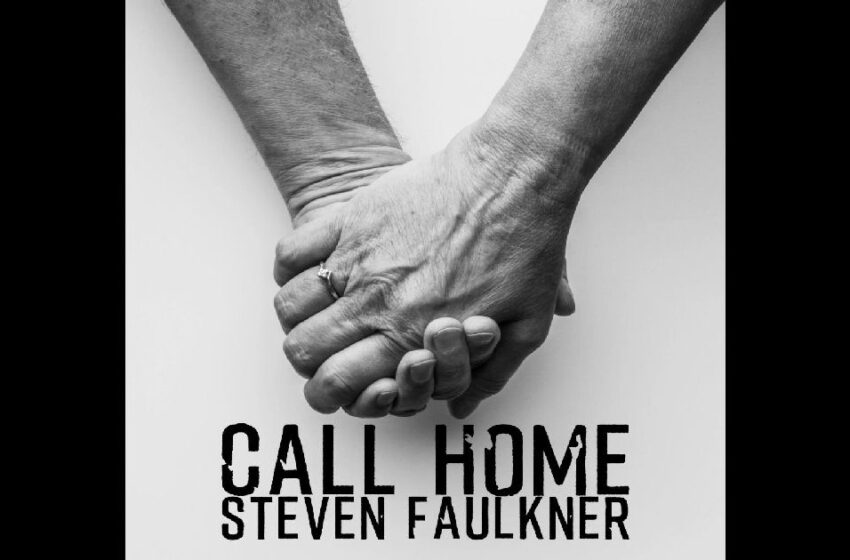 I kind of had to smile a bit when I was reading the notes & whatnot I’ve got scattered across my desk here that came along with Steven Faulkner’s latest single…I had that moment of realization…that feeling of genuine gratitude towards the many amazing characters out there in our independent music-scene that keep my world a-turnin’ I suppose.  Steven’s one of’em.  Doubt I’ll ever get tired of listening to what this dude comes up with next, or the occasional message I get from him here & there…Faulkner digs so much of the music that I personally dig myself…I gotta say, he seems like a fantastic guy to share a pint with one day.  Perhaps one of these days when I’m brave enough to venture over to the UK.  I think it should be safe at this point…I’m not worried so much about the ol’ Covid as I am wondering whether or not the history of my family line would get me pelted with potatoes or something just trying to cross the street over there.  I guess it’s been a few years since 1868 at this point…I’m probably in the clear now.

You might need to know your UK history to get that reference in-full.  I’ll leave you to Google it – enjoy.

Anyhow.  As I’ve been telling anyone within earshot or reading these pages of ours, Steven Faulkner has been surging into some of the best music he’s ever made over this past 365 days or so…he’s had an undeniably successful year of tapping into the craft and getting some amazing stuff outta himself, despite the inherent obstacles of a worldwide pandemic.  As I’ve mentioned many times, as unfortunate as the circumstances have been & in many ways still are – the realm of art & music have been thriving in ways it hasn’t for quite some time…underneath what we see on the TV news, there are some positives.

So let’s see here, let’s see…what do I think & what can I tell ya about his brand-new single “Call Home?”  I will say I think I like this…hmmm…I’m gonna say it’s either second place of the three new cuts I’ve heard from Steven this year, or a genuine tie for first…it’d be kind of mood dependent.  At least, this is in regards to how the masses might feel in terms of universal appeal & all that…I think for myself personally, “Call Home” might very well be one of his very best without question, and a song that was able to hit me right in the heart like a knockout punch.  The real bottom line is that if a track like “Time After Time” would come in third of the three, this man right here is in really, really good shape, because that song kicks verifiable ass & will supply ya graciously with amplified energy.  Personally speaking…while I think there are very grounded aspects of “Only At The Start” to be found in Faulkner’s insightful lyricism…arguably, there’s a more serious vibe & theme at the heart of “Call Home” that doesn’t have the playfulness that “Only At The Start” had…but that works for me.  Not only am I a huge fan of the sincere & melodic…but yeah sure, generally speaking, the more serious things tend to be overall, the more I’m probably more apt to be in line for a repeat.  If we’re talking about accessibility though – hands down, “Only At The Start” is still gonna win that competition cleanly – I could play this song anytime & be loving life for that choice – but that’s not the only defining quality of single-worthy sound.  Sometimes real songwriting generates interest that carries weight far beyond what a mere shiny hook would supply…and while there are both elements in “Call Home” to be found, I’d argue that Steven’s got a real songwriter’s tune here at its very core.  As in, sure…he might be trading a little bit of radio-friendly vibes here…but in return, you get one of his most artistic & mesmerizing cuts.

I’d be taking a good long look at what he’s achieved here if I were Steven…he’s basically found a way to combine the core elements of what we love about both The Beatles and Chris Cornell as one here.  The Beatles/nearly Pink-Floyd acoustic-ish beginning will hit ya first upfront and unhidden, and as “Call Home” continues on, he’ll expose huge Cornell-like vibes through his vocals for sure.  Steven ain’t hiding any of this, not from me, not from you, not from himself either – he’s well aware, I assure you.  But there’s a notable difference between setting out to be a copy, and a song like this where you can hear those influences without it being something you feel like you’ve really ever heard before.  What I really love about “Call Home” is that it in fact, both comforted me at times, and made me damn near miserable at times too.  My own definitions & relationships with what you or I know as the traditional definitions of ‘home’ would likely be very different than most…I bounced around as a kid to the point where I never thought I’d ever actually end up owning any one place in this lifetime.  When I finally did, I managed to hang onto it for about five years with every intention of living my life there forever – and then the ol’ wife walked through the door one day and asked me if I wanted to move to the other side of the freakin’ country, which of course, we did.  So while the physical aspect of ‘home’ or the standard definitions of what family is have and likely always will elude me entirely…I’ve also come to redefine the term altogether for what it means to me personally…wherever my wife is, that’s where my home is too.  “Call Home” would apply just as much in that regard…as Steven would tell you himself, it doesn’t have to be any kind of physical location – ‘home’ can absolutely be a state of mind as well.  Essentially, ‘home’ in this sense is the place where we’re always accepted, loved, and appreciated…and even in those most beautiful scenarios of a definition like this, the circumstances of life can make us wander away or drift at times.  Faulkner’s latest track is a stunning reminder that it’s always there for you…and to not neglect it.

“Raise up your hand if you’re counting the days, until you figure things out, and accept your mistakes…and you come to a place you…can call home” might very well be one of the best opening lines you’re gonna hear in any song out there, ever.  That’s a master-class on how to establish a mood & a moment right there is what that is – I was immediately interested in both the sound & the concept, right away.  The acoustic guitar is spot on in that subtly epic & cinematic “Sunshower” style of Cornell type gear, which is assisted brilliantly in being fully realized via one of Faulkner’s friends, Natasha Pattinson, who plays the exquisite sounds of the viola you’ll hear.  I don’t know a lot about anything in this world we’re living in, but it strikes me that if you’ve got someone awesome in your rolodex that you can call when you need a viola of all instruments to appear on a song, you’re doin’ A-OK in this lifetime, yessir.  What Natasha goes on to supply “Call Home” with is extraordinarily essential to the entire atmosphere – that haunting mix of beauty & wisdom not only gets supplied from Steven’s vocals, but the music as well as a result of having Pattinson come in to crush her part with that stunning broken-angel spirit that an instrument like a viola can provide – I love this combination of their talents together, full-stop.  Sprinkle in some additional magic in Ady’s (AKA Jupiter’s Basement) mixing & mastering, and voila – your viola & guitar tune becomes every bit as enticing & interesting as it is verifiably entertaining & enchanting to hear.  So congrats to all-hands on deck here…”Call Home” is a compelling cut from start to finish, 100%.

I’m all about it.  I’ve been tellin’ ya that Faulkner is surging into his prime for some time now, and I can’t imagine anyone listening to “Call Home” and not coming to that same very conclusion.  Remarkable job on the vocals here…Steven should be seriously proud of what he’s put into this microphone and the jaw-dropping moments he’s created.  While no one out there is ever gonna quite be Cornell – Steven reveals he’s not as far away from a splitting image as you might have thought possible when you hear his biggest moments and most demanding notes.  Make no mistake y’all – “Call Home” is by no means any kind of easy song to sing…its mellow moments might be less demanding on him sure – but the massive heights of those demands ask for his superhuman best, and that’s exactly what he supplies, flawlessly.  I’m extremely impressed by “Call Home” from beginning to end…it’s evocative, it’s gripping, it’s REAL – this is a stunningly relatable idea & impeccable execution combined – I’ll remember this song, forever.

“Call Home” officially comes out next week on Friday, July 16th – do NOT miss out on this!  Circle your calendars, set your alarms…do what you gotta do – just listen.  Steven Faulkner is brewing himself into a fantastic songwriter & highly skilled artist out there in our independent scene…he makes music that deserves your attention, so give him a little of that will ya?  Find out more about Steven Falkner and hear more of his music directly from his main site at:  http://stevenfaulknermusic.co.uk/