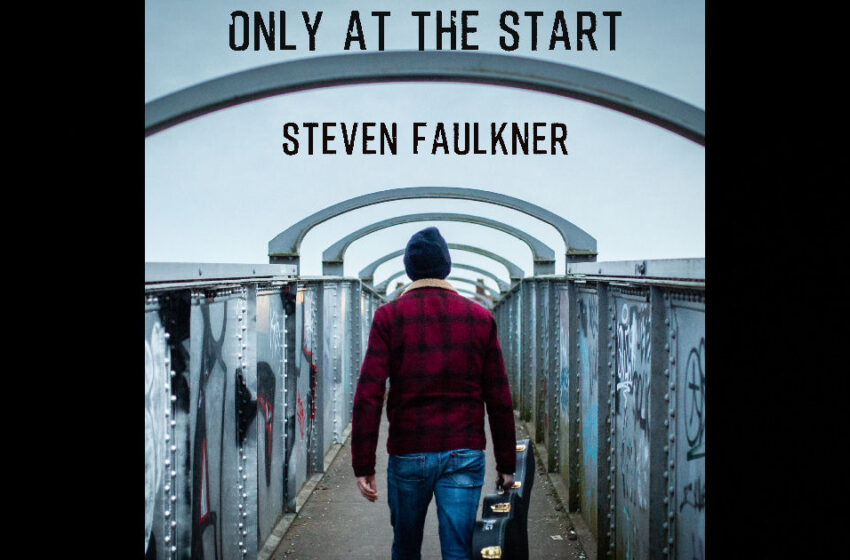 Steven Faulkner – “Only At The Start” – Single Review

There are some of you folks out there making music…just like this guy Steven Faulkner right here…where it’s truly been a pleasure to listen to the evolution of their work over the years.  You have to understand – my man here was practically recording into a tin can when I first started listening to his tunes – he might be living in his PJs “Monday through to Sunday” right now, as many of us are & he’ll tell ya himself on his latest single “Only At The Start” – but believe me when I tell ya, in behind the scenes, this dude has put in a remarkable amount of work in leveling up his whole sound in what’s really a relatively short timeframe.  No joke – I pushed play on this song and just started beaming out a huge smile…knowing where he started, where he is now, and where his work-ethic, talent, and skills will still lead him in the future…hearing the phenomenal amount of noteworthy punch & personality in his music…I mean…c’mon…how could that NOT bring a smile to the bearded face of a guy like me?  Yet at the same time, evolution can be such a profound & beautiful thing you could damn near crunch a tear or two as well just from the pure joy of the experience of listening to an artist like Steven really step into his own.

Dude’s always had TONS of personality and the X-factor that stands out to me – and on “Only At The Start,” he proves I’ve been 100% right all along!  Let’s be real here – Steven proves to be a master of contrast & smart songwriting with a whole selection of tongue-in-cheek observations with cleverly self-deprecating attitude laced into his lyricism that would make a band like Green Day proud, combined with genuine sincerity that’s pretty much added in with equal doses of serious sweetness & pure intentions.  Listening to how confidently, cool, calm, collected – and truly professional this dude has become, which you can hear INSTANTLY from the moment you push play on “Only At The Start” and he soon after as well as he begins to sing…like…Steven’s got hooks radiating & bouncing off the walls from the brilliance of his vocal melody in his verses to the vibrant & lively lead guitars that’ll come in soaring through the atmosphere, the inherently warm rhythm & groove of the main music hooks, right up to & including the remarkable backing vocals & the drums beats that rock consistently & clearly between your speakers for maximum impact & effect.  YES that’s a run-on sentence to the nth degree…you know how I get when I get excited.

Bridge…solo…verses & chorus, and the finale…I mean…it’s not like anyone out there is asking me to list the order of how much I like stuff, but there it is in black & white for ya, in that order, least to greatest.  Let’s see if we can do it again here…lyricism…vocals…music – yep, there ya go…I’m satisfied with that – and keep in mind, this ain’t me complaining about any aspect whatsoever, I’m simply giving you a list of what made the biggest impact on me as I listened more or less.  Steven’s got this one dialed right into where everything works exceptionally well…like for me, the most questionable spot might have been the bridge, but considering it has a whole bunch of words that are important to the storyline of this song, that moment still serves a huge function in “Only At The Start” overall.  The music he’s got here throughout this single LEAPS outta your speakers…and the man should be seriously proud of that, I know it’s Steven that’s tweakin’ the dials on the studio boards…and this song sounds SPECTACULAR.  Like it’s just a plain ol’ smorgasbord of what’s not to like & what’s not to love – and you gotta love having a problem like that when you’re in this chair I’m sittin’ in over here in the nation’s capital of Canada.  I don’t think he could have done a single thing better when it comes to how sensational the verses & chorus of “Only At The Start” have come out, and lyrically, I think he’s put in some remarkable stuff with a whole lot of attitude & heart on display.  If you’re listening close, you’ll discover “Only At The Start” has an incredibly relatable vibe goin’ on – like you couldn’t miss it after all we’ve been through over this past year or more – we’ve all been livin’ in our PJs, eatin’ nachos, watching shows – and thankfully, we’ve got a guy like Faulkner here that’s found a fantastic way to remind us there’s much more to life than all that.  Pro-tip – if you find yourself watching endless re-runs “staring at your TV,”…then like…I mean…ain’t there something you could be doing better with your time?  You’ve been there, you’ve done that – move on.  Do what Steven has done – find your passion, and DO SOMETHING with it.  At the very least get yourself some sunshine…you can do that even whilst you live in your PJs.

I freakin’ love the guitars on this song, I absolutely love the way Steven sings it, and lyrically, I think it’s aces really – so when you look at that list above from beforehand, where it says lyrics…vocals…music – that part?  Recognize he’s swinging big from strength to strength, and that the quality in every aspect is either just as good or as great as the next element contributing to this single.  If we get into just how incredibly PERFECT and immaculately ADDICTIVE his chorus hook really is as he sings the endearing title of “Only At The Start,” we will literally be here all week…so don’t get me started, y’all have things to do, right?  Because that SHOULD be the conclusion you come to here…you should love the Blue-album-era-esque Weezer-like playfulness you find here…and once you’re done listening, if you’re paying attention, and you really connected with this song, you should find more than enough inspiration to fuel your own next adventures.  Faulkner is in as fine a form as ever here on “Only At The Start” & he’s got a colorful & charismatic, downright charming new single that absolutely hits the mark – that ain’t fiction, that’s facts.

Keep tabs on this guy folks…Steven Faulkner keeps getting better & better and I’d still swear he’s likely got his best years to come ahead of him – I love where he’s at right now with his music and he’s been on a serious hot streak as of late as far as my ears are concerned…I’d be more than content if he were to simply keep the quality where it is right now & his ideas as fresh as they have been lately, but I know that this is also a man that loves the journey just as much as the destination when it comes right down to it…he’ll be constantly challenging himself as an artist in many exciting new ways over the course of his career for sure, you can bet on it.  I made a whole paragraph outta that last sentence too…how ya like that?  Told ya I was excited!  Faulkner’s evolution is a wild ride to be on – I’m just happy to have found a seat when I did at the front here…though it IS getting pretty crowded TBH…you might still be able to squeeze in yourself somewhere on this dude’s bandwagon if you move quickly…I’d recommend you do.

Find out more about the man & his music from his official website at:  http://stevenfaulknermusic.co.uk

Tags: Only At The Start Singles sleepingbagstudios Steven Faulkner