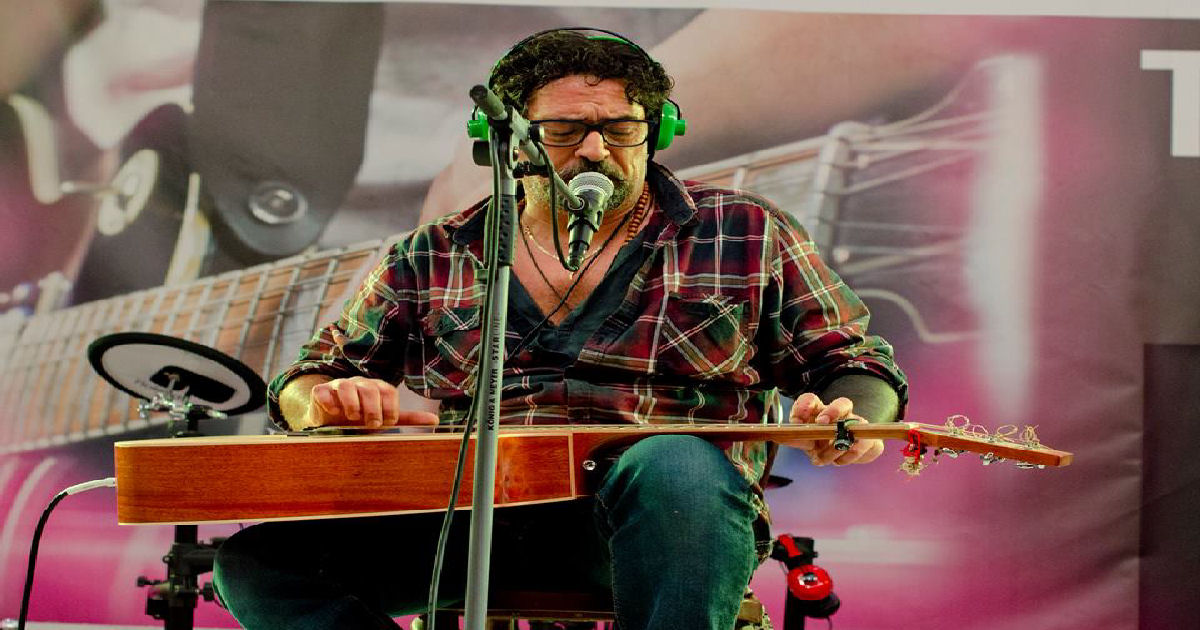 If Mario knew just how many artists/bands I deal with on a daily basis that struggle with ONE guitar – he’d know he was pretty much giving me a heart attack watching him set up TWO in the studio to play in the video for his new song/cover-tune called “La Paranoie.”  You read that correctly – Mario Marco Farinato isn’t just back with a brand-new track, he’s back with a guitar for each of his hands.

And to be clear – we’re not talking about any of that easy double-neck guitar-stuff – no; I’m entirely serious…Mario is actually playing two separate guitars on “La Paranoie” at the same time!

I was honestly just concerned that they were supposed to be giving him more room in the studio as he squeezes in with his second guitar and makes space for himself in the video…it took me back to the days of my own first studio where there was just enough space for two players at a time and a little bit of oxygen to breathe, not much else.  Still – neither of the players inside ever had TWO guitars playing at once…even thinking about it now, I’m not all that sure that I’ve actually seen anyone do this before.

What I find extremely impressive about Mario’s music aside from the tremendous amount of skill, is that something as adventurous as this fits right in with his character.  He’s not ‘showing off’ – he’s genuinely exploring his own capabilities and challenging himself as an artist to come up with something entirely unique – and that’s certainly the end results of his efforts on “La Paranoie.”  Believe me when I say, if I could play two guitars at once, I probably would have mentioned it in EVERY article I’ve written and phoned every person I know just to make sure they knew I had this musical-superpower…yet for Mario, aka Panchopigna, it’s just another humble day at the office fully immersed in the craft he loves so much.

It’s because of his dedication, commitment and passion that things come out so well.  I absolutely LOVE the way this video is shot…and personally, I love spaces like this that leave you just enough room to do whatever you need to do and still has everything else you might want to do within reach.  You can see there are drums and other instruments in the room – but they’re just decorations here; Mario’s doing just fine with two guitars…and of course, when he decides he wants a beat, he just uses one of those.  “La Paranoie” is insanely well coordinated…this is mental-multitasking to the nth-degree and so entirely well done that everything comes out sounding as perfect as four players taking on each individual part.  You’d assume with so much going on that maybe there’s a note or two that might slip somewhere…or that maybe Mario would have to sacrifice some quality in the vocals while concentrating on keeping the music going, but no – he’s so relaxed, comfortable and in-control of his melodies in the music and vocals it’s like he’s one step short of putting his feet up on a desk or in a hammock while he plays.  Don’t get me wrong…I’m not saying he’s not focused – he’s extremely focused – but he’s also so damn good at everything he does that he can make it seem like something as incredible as this still comes easy to him.

Listen to the technique he’s applying in his instrumentation and you’ll know this is no fluke.  Think the recording was done in separate stages?  Watch the video below and see him play this all at the same time – it’s stunning to watch and shot beautifully in black & white.  Safe and sound inside the music-studio/bunker he’s in, from verse to chorus, he’s not just playing something unique but has also created a song that is massively inviting to listen to.  Straight-up, it’s a captivating piece of music when you look at this from beginning to end…from concept to execution, Mario Marco Farinato has completely delivered on something truly new in the way he approaches this cover-version/adaptation of the Colin Hay song “Overkill,” that hits the mark entirely.  I honestly couldn’t decide between whether I loved the ideas & new-direction more, or the brilliant performance, or the stunning melodies in the writing, or the perfect in-studio video that comes along with it to support the song on a visual-level…you get the idea – this all came out fantastically for Mario & thankfully he’s chosen to share it all with us.

This is a really big win for a player we already know is incredibly sincere and passionate about his music.  Loved the way his harmonies came out, loved the innovation in the music that you’ll find on “La Paranoie” and I think that Mario has an amazingly accessible sound that really warms the heart, no matter what he’s singing about.  It’s the way he connects to his music with such strength that makes it translate perfectly to any set of listening ears…you can’t help but feel the melodies he sings resonate inside you and notice that the way he plays will give you that genuine tingle of excitement that you get when you discover something truly unique that you instantly love.

The man might be competently and capably playing two guitars here…which is cooler-than-cool…but let’s face facts, there’s lots of guitars out there – but there is only one Mario Marco Farinato.  He’s the real deal and he always brings something new & stunning to his blend of world/acoustic/indie/folk-pop that showcases mountains of skill and serious heart.  “La Paranoie” is a perfect example of Mario at his best and most inventive, even on a cover tune!  Not many artists can pull off being this unique and identifiable in a cover situation, but Mario gets an A-grade easily for the inspired performance he puts in – I loved this single from the audio to the video and undoubtedly, you will too.