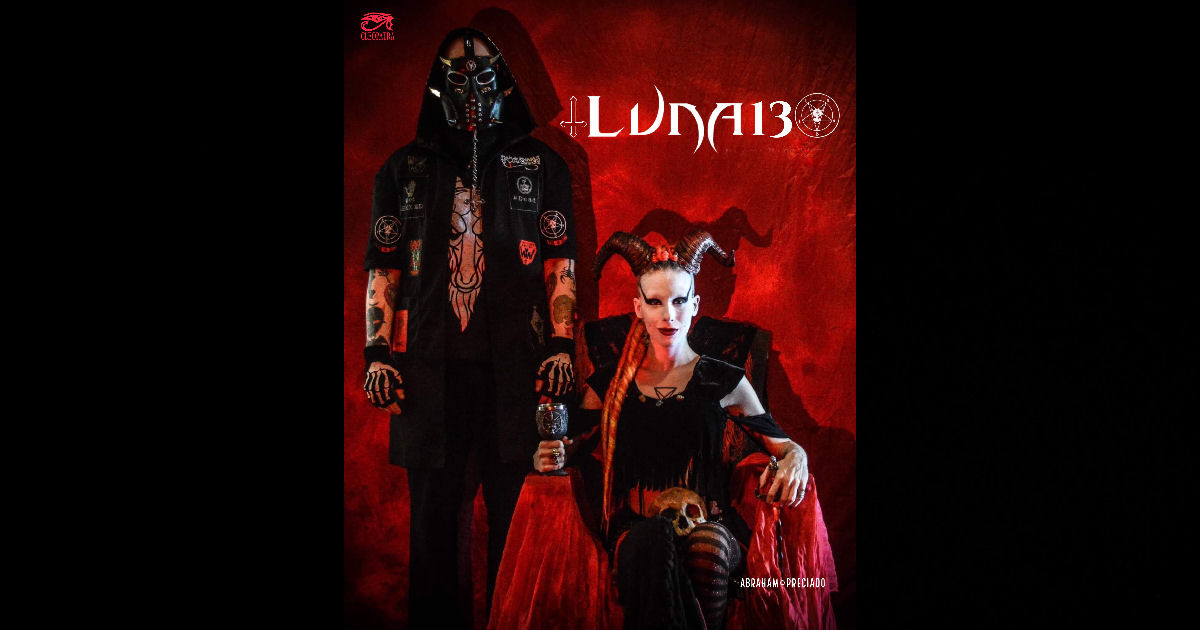 Transcribed direct from a local radio-show in Los Angeles – discover what is being screamed about over the airwaves regarding the underworld’s best-representatives in music today, LUNA13, in their latest press release…

There is a new music project called LUNA13 creating a ruckus in California.  Could you believe I walked into the Whiskey A Go-Go to see HammerFall to overhear a conversation on who was darker, LUNA13 or Watain!?  Mind you, we are talking about a Bass Music project, a Producer named Dr Luna, endorsed by KAT Percussions, and an ultra-sexy black metal singer in Lilith Bathory who wears horns, spits blood and gets nude.  It is sac-religion at its finest, a glorification of the Dark Divine!

Yet don’t let the theatrics fool you.  Their songs are a sound so original and so heavy, bands with major labels are taking notice.  I watched LUNA13 get shout-outs by big metal bands on Instagram, that is how I heard of them.  I saw a photo of Possessed’s bass player Robert Cardenas with Lilith Bathory showing two horns up!  I went home and downloaded G.O.A.T Witch and was ear defiled by a wall of heavy sound incomparable to any genre I was familiar.

Hollywood CA’s Satanic Vampires, LUNA13 have served as Bass Metal ambassadors, keeping the spirit of evil music alive through shockingly grotesque performances and Electronic Bass Metal song-craft (you read that right).  This project is brutal, dark and visually stunning.  Something Dead Can Dance and Watain would be proud of.  Five years old they just released their sixth studio album Wicked Gods on September 9 through Cleopatra Records and have dished out a Hell-ordained video for track 4, “Evil Loves.”

Wicked Gods reignites the same infernal fires that burned through G.O.A.T Witch with its buzz-saw bass and unforgiving tempo as the earth fractures, offering a portal from the underworld to Earth with an explosive Saw Bass blast in the album’s second track “Serpent.”  The opening track “Wicked Gods (Intro)” is a Satanic ritual to Lilith and Baphomet.  Lilith Bathory’s venomous rasp is darker than ever, and pushes LUNA13 over the top in songs like “Death Box,” “Leviathan,” and “Blood Bath” – LUNA13 is the most original project I have seen in recent years.  Dr Luna’s approach to creating dark electronica might be an actual upgrade.  LUNA13 is bold, dark as the blackest night, highly original and presses electronica music to evolve.  LUNA13 is fearless in all the dark ways music is supposed to be.  Check them out if you dare, but prepare yourself for something you have never heard before.  This Bass Music project was voted one of the top 5 Death Metal bands in Los Angeles, they were mentioned as one of the top 5 Black Metal bands to look out by Worldwide Underground, they were in the B-Movie “Devils Domain” and Lilith Bathory was in The 69 Eyes video “Two Horns Up” ft Dani Filth.  Get ready for a new genre of musical darkness!  Grab Wicked Gods ASAP!

Find out more about LUNA13 from their official homepage at:  http://luna13.net