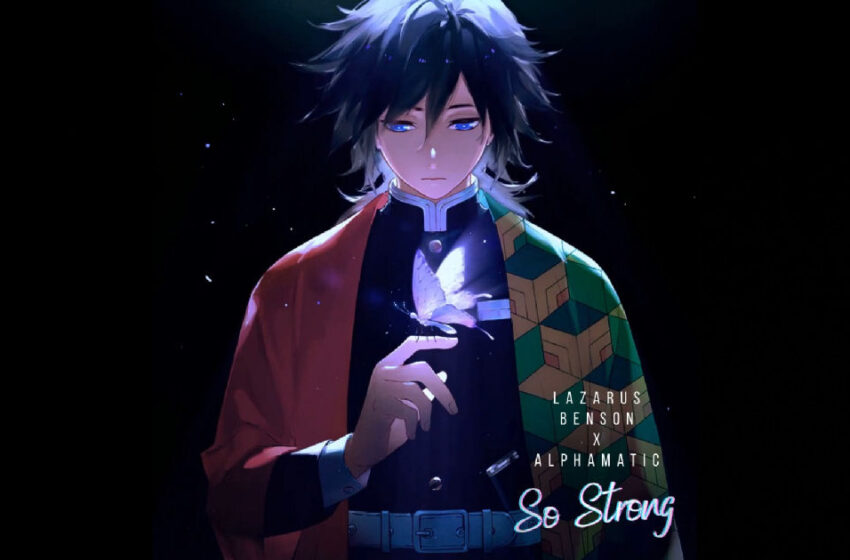 You can always tell an artist is startin’ to level-up when you see how talent attracts talent.

The ever-active Lazarus Benson and his hybrid Nu-Metal vibes have been all over our pages this year.  From reviews on cuts like “Monster” and “Like You” at the start of 2021, to more recent collaborative tracks like “Losing My Mind” with Grimm and “Merry Go ‘Round” with Kung Fu Vampire – LB has been making this year seriously count when it comes to moving his whole career forward at full speed.  As he alluded to in the interview we did with him back in September this year, Lazarus was far from done with the year & still had plenty of tricks up his sleeve before 2021 was all said & done – and this single is one of’em.  Enlisting the talents of the legendary AlpHaMatic to lend an assist on the bars of “So Strong” was a solid decision – the man’s a seasoned vet of the game that’s shared stages with just about every name that’s currently rocking on your playlists and has been for years.  Stuff I really dig too…Lyrics Born, Flobots – hell, even 2 Live Crew, Bone Thugs N Harmony, and Cappadonna…the latter of whom, if I recall correctly, was one of my very first interviews some twenty-years ago when I first started into music journalism at a different online spot called Kludge Magazine back in the day.  It was either a music review or an interview…twenty years is a long time y’all…I’d have to check the official archives myself.

Anyhow – rest assured – you don’t end up on stages with incredible titans of the industry like all those names I’ve cited & the many more that AlpHaMatic has played with throughout the years without really knowing your way around what real entertainment is all about, you feel me?  So in that respect, having AlpHaMatic on “So Strong” was pretty much destined to lead to one of Lazarus Benson’s best, even just as an idea on paper before the song even existed…and of course, hearing it in action, proves that it did.

Credit where credit is due, as rad as it is to have such a badass share the mic on “So Strong,” it was actually Benson’s production that I noticed immediately – this track shows huge improvements.  As to how that all came about, or what makes it so noticeable…that’s harder to say for sure…it could be as simple as a new technique or twist of the dials on the studio boards, or it could very well also be the effects of the internalized pressures of working with talent you don’t want to disappoint as well.  In working with AlpHaMatic and his bulletproof reputation, I’m 100% positive Lazarus likely felt a bit more pressure on himself to bring his best this time around…that’s just kind of how things naturally go for the artists & bands out there.  Talent attracts talent, yes – but it also inherently forces us to raise the stakes when we’re collaborating.  Right from the drop as “So Strong” kicked in, I could hear that Benson had no problem accomplishing exactly that – the clarity was impeccable, and the punch in his music hit harder.  The sample hook hits ya next, which is arguably the most memorable aspect of “So Strong” overall…it’ll definitely be the piece you remember at first for the melody it delivers – but that’s not to take away from what you’ll hear in what Lazarus or AlpHaMatic bring to the mic, they’re just using a whole hell of a lot more words for you to remember is all.  The performances here all come out with the right energy, the right focus, and words that land with resounding impact – “So Strong” is as mired in the emotional murk as you know Benson’s music to be and remains consistent in that respect – his longtime fans will be stoked to hear more of what they love from the guy, but like WITH more of what they love from the guy, you followin’ me?  Honestly, I’d be hard pressed to cite a track that I personally like better out of LB’s catalog to-date…”So Strong” was is built of ice-cold emotions and steely resolve, and between Lazarus and AlpHaMatic, they slice through the weight of the pain to break through into savagely inspired vibes.  “I never wanted praise, no – I only wanted purpose,” as AlpHaMatic will tell ya on this new single – I might have a whole lot of praise for what they’ve created here in this collaborative effort, but it’s entirely because of the passion and purpose they’ve performed & put in with that I feel that way.

Solid single-worthy sound in this cut from start to finish – whether it’s the powerful dynamics of the music boomin’ through your speakers, or the electrifying vocals added into the mix from both Lazarus and AlpHaMatic…and which way you turn your ears, they’ll be impressed with what they hear in this cut.  “So Strong” comes out officially this November 19th – circle the date, mark your calendars, and be ready.

Until then, find out more about Lazarus Benson at his official page at:  https://lazarusbenson.com