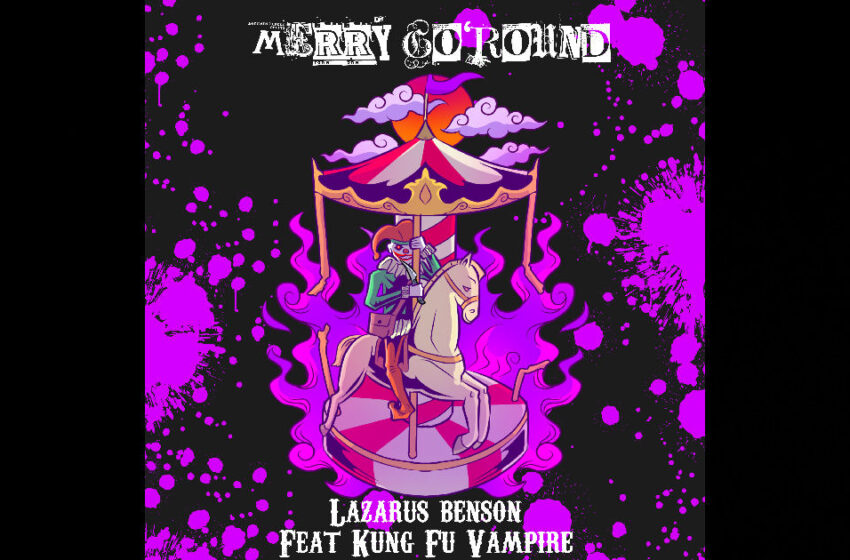 “You’re not the circus – you are the clown.”

The man’s got himself another solid entry into his catalog and another killer collaborative effort in the mix for ya.  And while I’d love to claim I’m surprised by that, I’m not really…Benson’s proven to be a verifiable force within the Nu Metal/Rap Rock scene and has maintained a noteworthy consistency with his music throughout the years.  Plus…I mean…if you read the last interview that we did here at SBS, which featured Lazarus Benson spillin’ the beans on all kinds of stuff coming up for the future, you’d have already known that has was stoked about this particular cut “Merry Go ‘Round” coming out this October 22nd.  I usually take a lot of that stuff with a grain of salt…like I advise so many people, artists & bands out there – your new song isn’t ALWAYS going to be the best you got – but in terms of how you feel about it at the time, hell yeah it should feel like it is!  It’s only really in retrospect that we learn differently, or by comparison to the other cuts in a catalog etc. anyway; let’s just say I’m savvy enough in what I do to be able to recognize the difference between genuine excitement and the hype of a brand-new song.  Lazarus knew he had himself a wicked single coming up with “Merry Go ‘Round,” and I’d say he was accurate in that – this cut packs in a lot of intensity and all-out gripping sound to your speakers.

So let’s see here…what can I tell ya?  The music is savagely on-point…awesome bite to the aggression in the guitars, brilliant smoothness to the synthetic vibes surrounding it…and the vocal hooks of “Merry Go ‘Round” are memorable without question.  Lazarus takes on the opening verse for the most part holds his own with all the confidence & melody you wanna hear…with all the intensity to be found in this cut, he’s got the advantage of a track that’s got something to listen to from every angle – as in, maybe it’ll be the vocals that grab people’s attention, but it could just as easily be the music, or justifiably both of course.  Aside from what could come out with just a slight degree more fluidity in the first two lines, I felt like Benson put in a solid performance with no real holes to be found throughout the rest of the distance.  I think opportunities exist like perhaps diversifying that second chorus a little bit with something extra in comparison to the first…but there’s really nothing to complain about delivering a defined hook that people will wanna hear with equal precision each time it shows up either, so I won’t. Chances are we all hear opportunities that exist in the space of the music we listen to, whether it’s the backing vocals we provide as we sing in the car on the way to work, or a legitimately insightful feeling you get as a musician that knows there’s potential for a track to do more somehow – but the real bottom line is it would be wrong to expect or think that anyone could ever cater to all those different things at once.  You hit that recording light & get in the studio, you live with the results that come out – all you can do is make sure you can stand behind everything you DO bring to it; I’m sure Lazarus feels like he’s able to do that with confidence, and rightly so.  “Merry Go ‘Round” has a whole lot of intense heat & melody to it…solid dynamics that stand out along the way, and a huge finale to burn it right down to the very final smoldering seconds.  Benson knows what he’s doing – and we know he knows, because we can hear it – it’d be impossible to listen to “Merry Go ‘Round” and know the goals, intentions & ambitions he has for the vision of his sound and not feel like this came out right on target.

PLUS…he’s got SIGNIFICANT backup here – that’s the facts.  You couldn’t ask for a more professional all-star performance than the one you’ll find from Kung Fu Vampire in the mix here to handle the featured bars of “Merry Go ‘Round” – and I gotta admit, it’s pretty tough to argue that he doesn’t steal the entire show here.  Were it not for the absolutely MASSIVE heights this cuts reaches in its angst-ridden vibes at the very end, I think KFV would have easily locked down the most memorable highlight – but at the end of the day, no one’s fightin’ it out here – you get both in this one song, so shut on up & just enjoy the ride will ya?  Kung Fu Vampire comes in swinging live-wire personality, perfect tone, conviction in every syllable, and a supercharged energy of his own that brings a ton of extra dimension & depth to shake up the atmosphere of this hybrid cut & make even more out of its potential.  For real y’all – that’s one of the best guest appearances you’re likely to hear on any cut this year – that’s how much of a highlight Kung Fu Vampire puts into this cut, you feel me?  There’s no denying the power this collaboration generates together in tandem throughout “Merry Go ‘Round” – it’s got all the right pieces in place for sure, delivering a bold combination of hard-hitting sound, edgy lyrics, two larger than life personalities on the mic full of charisma & vocal intensity, and hooks that’ll demand your attention.

Find out more about the music of Lazarus Benson at his official homepage:  https://lazarusbenson.com