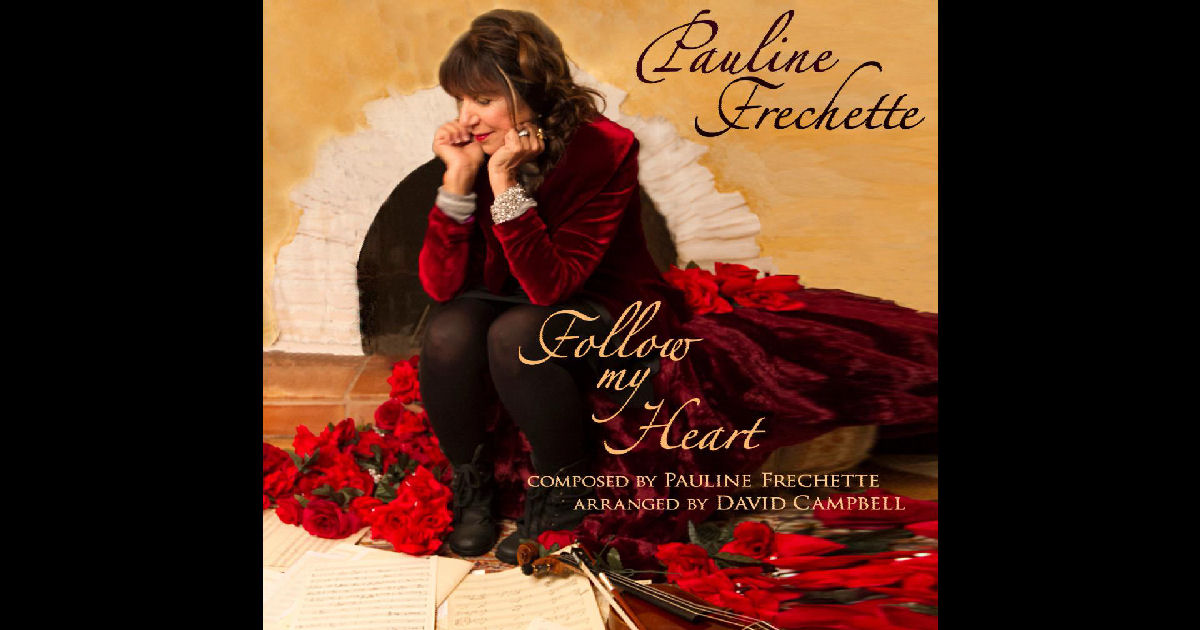 I’ve gotta admit, I’ve always enjoyed the fact that artists like Pauline Frechette can exist on pages like ours.  It was over four years ago now that we decided to take on music reviews – and I like to think that a lot of the reason it’s become the most sought-out aspect of what we do online is largely because of the diverse talent & sounds we find out there on the internet & have never limited ourselves to just one genre or style.  I’ve always felt it’s extremely important to be exposed to music of all kinds, which is why it always makes me smile when someone like Pauline comes along with a style we don’t always get in our daily routine; a classic & graceful approach that has been proven to provide a unique source of audio-entertainment time & again through the collaborative efforts of Frechette & David Campbell.  There is another very notable name that’ll appear on one of the two tracks and make an extraordinary contribution to Pauline’s new Follow My Heart EP – and we’ll get to that, I promise.  I don’t do clickbait headlines when we post articles…but I do have to do SOMETHING to keep you reading, so read on!

For those that like their details upfront, “Follow My Heart” is composed by Pauline Frechette and arranged by David Campbell.  On this particular EP, you’ll get two amazing perspectives on the title-track – both of which absolutely have their own distinct sound, ultimately leading to two separate experiences in a sense, but also rooted to the overall composition, structure & flow in each version.  What was impressive to me right off the bat in comparing the two tracks was just how different each one came out; like splitting the musical-atom if you will…they’ve created two halves that are powerful.

In the song’s first version, “Follow My Heart” features Pauline’s mix of soulful & emotional tones in her vocals really brilliantly moving with the stunning music in insightful directions.  Make no mistake – this collaboration between her and Campbell is a well-oiled machine at this point, they’ve brought numerous ideas to life in music and experienced much success in the past with thousands upon thousands of plays on the singles they’ve released & we’ve reviewed along the way.  So to hear them thriving once again is generally no surprise…they’ve formed an artistic alliance that really represents them both incredibly well and this new song “Follow My Heart” is proof of that yet again.  The depths of the music are present right from the get-go…I love the sound of the bass with the cello strings…it’s got a deadly amount of drama that carves out a perfect path for the expressive way that Pauline sings this song.  I’m sure I must have mentioned the potential for soundtracks that Pauline’s music has in the past…I know this is a weird association but I get this weird like…Jungle Book vibe from “Follow My Heart.”  Something about the way the music slithers in behind Pauline’s voice and the mix of mystique, love & sorrow in the lyricism really hit the mark.  Gotta be those bass-lines…not sure what it is exactly, but I loved the music from that original Disney film so I suppose that has to be a good thing right?  It’s either that or I need to expose myself to a whole lot more combinations of blues/jazz to get some better references…someone out there has to get what I’m trying to say in that comparison though, so I’m leaving it right there for ya.

All those good things being said – I think there’s also a real strength in this collaboration that further reveals itself by letting the music of this composition speak boldly for itself in the second version of “Follow My Heart,” which enlists the incredible talents of Stewart Cole as a featured guest.  Many of you will recognize that name easily for his work with just about everyone in music at some point from what it looks like; from the White Stripes to Sia, Beck to The Crystal Method – it’d be shorter to list the artists/bands he hasn’t contributed to at this point in his career as a professional trumpeter.  And then of course, there’s also that other extremely well-known project you probably recognize him from, Cole’s main group, the inimitable Edward Sharpe And The Magnetic Zeroes.  You get the point I’m sure – he’s a renowned & versatile talent that’s plenty active out there in the music-scene today and certainly has been for some time.  The contribution he makes to the sound of “Follow My Heart” was truly incredible.  That’s not name-recognition working in Cole’s favor – that’s just facts; he really puts an amazing spin on the sound of “Follow My Heart” with his emotive trumpet style, which essentially replaces the space where the vocals existed on the first version.  This all-instrumental version speaks even more loudly on behalf of the music, arrangement, composition and production of “Follow My Heart” overall, and without a single word.  It’s a truly captivating listening experience with Cole’s notes & tones filling the atmosphere, capturing the essence of the feeling & emotions in the original lyricism & flow in the stunning way he moves through “Follow My Heart.”  The mix has Cole in the spotlight for sure, but rightly so & justifiably so – I can only imagine all ears would approve due to the way he’s added such perfect tones into the existing framework of the melody & music in this instrumental version.  If you’re familiar with Cole’s music at all, you’ll know he could find a way to work his trumpet magic into just about any possible combination of sound out there that you could think of – but make no mistake, he’s not ‘playing down’ here in any way – he’s right there to assist Pauline Frechette & David Campbell as they’re rising up.

Great job on both versions – ultimately, “Follow My Heart” in either of its forms is a truly captivating song to experience, and it’s because of that, that this two-song EP actually becomes a highly repeatable & memorable moment in music you can continually enjoy & dive right into the depths of its emotions on multiple levels.

Find more music/info from Pauline Frechette at her official pages below!