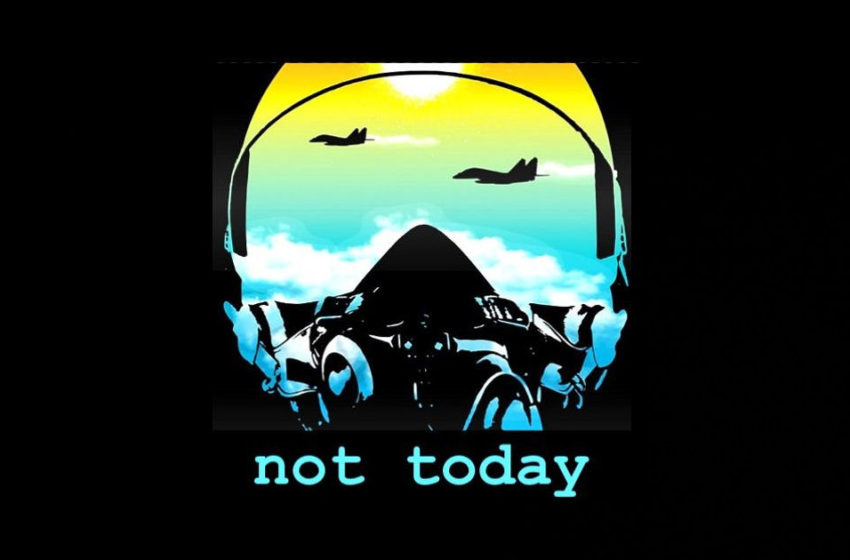 Synthpop addict Gary Blake is back at it again!  Or…it’s probably more accurate to say, if you follow the guy’s every move as closely as I have been with his project Neon Radiation…well…you know it’s not so much ‘back at it again’ as it is ‘always at it – constantly!’  From what I can tell, the man listens to just about as much music as I do…yet somehow, Blake also finds the time to make an impressive amount of his own as well.  Call it a genuine love of the craft and a healthy addiction to being relentlessly creative.

And apparently, his obsession with the 80’s sound/style goes further than music, right on into movies as well.  The brand-new single by Neon Radiation “Not Today” actually has “(Top Gun Soundtrack Tribute)” in brackets beside the official posting – and if you’re familiar with the film and sounds within it, you’ll definitely hear the influence running all throughout this latest synthetic audio offering.  In terms of timing, which ‘they’ say has everything to do with music…given that the new sequel is nearing its way towards theaters soon enough…”Not Today” is coming out at a moment where the people out there will be searching for all-things-Top-Gun – and that’s sure to work in Neon Radiation’s favor when they do.

I can dig that.  It’d be one thing if Neon Radiation was simply trying to ride the wave of interest, but I know for a certainty that Blake comes at this style & sound from a place of genuine love & respect.  As in, chances are, even if there wasn’t going to be a Top Gun sequel, he’d still likely have written a Top Gun tribute at some point anyhow.  The big drums and bouncy digitalized rhythms of “Not Today” come naturally to Neon Radiation…I suppose that’s what I’m saying; does “Not Today” fit the Top Gun cannon – or is it more of a case of whether or not Top Gun could ever be cool enough to fit in Neon Radiation’s?

Collaborating with the fantastic Nikki Simmons on the mic and the talents of Gordon Stockley on guitar, “Not Today” flexes consistent fun, energy, and melody with a dreamy edge to the overall sound.  There’s truly a ton to dig on…from the brilliant bounce of the rhythm & groove, to the smart additions like the control-tower voices sampled in, to the heights that Simmons reaches with her vocals that add the true sound of accomplishment, victory, and achievement to the heart of “Not Today” – you’ll find all this & more on Neon Radiation’s latest single.  Plus you’ve got the focused writing & production of Gary Blake, which undoubtedly, will never steer your ears in the wrong direction – this dude knows what he’s doing.

Ultimately, you get yourself some real high-flying audio entertainment here when all is said & done.  The lyrics strongly support the theme and tributary purpose of “Not Today,” and the entire feeling that this single evokes echoes the freedom & soaring atmospheres it intends to with radiant sound sparkling from the lefts & rights.  For myself personally, I think “Not Today” does a great job in displaying the focus in the music & songwriting within Neon Radiation – though it might be hard to argue that Nikki doesn’t steal the show here with the fantastic vocals & lively energy she puts into her performance.  Particularly in the pre-chorus if I’m being altogether honest with ya – I think the execution in that moment is spectacular, and could quite possibly contain the biggest hooks of this new single, though I’d never deny the fact that you’ll find plenty of others in every part surrounding that moment as well.  All-in-all though, you’ll find no complaints from me – this single has all the right ingredients in the mix and flexes the genuine joy & passion you’ll find runs rampantly throughout Neon Radiation’s entire catalog.

One thing is always guaranteed – Neon Radiation has literally and audibly ALWAYS got something rad going on – “Not Today” is further confirmation & proof of what we already know to be true when it comes to that.  But make no mistake dear readers, dear friends – there’s a LOT to be said for a project, artist, or band that never disappoints…and I suppose that’s why there is always a whole ton of words on these pages of ours when it comes to discussing the music of Neon Radiation…that’s more than cool with me.  If Blake & his collaborators want to continue putting out high-quality tunes designed to shine like “Not Today” does, you’ll always find I’ve got a whole lot to say about’em – Neon Radiation deserves the extra passion & attention to detail in writing if you ask me…and I suppose someone must have.

Because true passion and exemplary attention to the details in all-aspects from performance to production creates songs that truly stand-out for all the right reasons – and that’s exactly what you’ll find exists and thrives reliably at the core of the music made by Neon Radiation, every time.