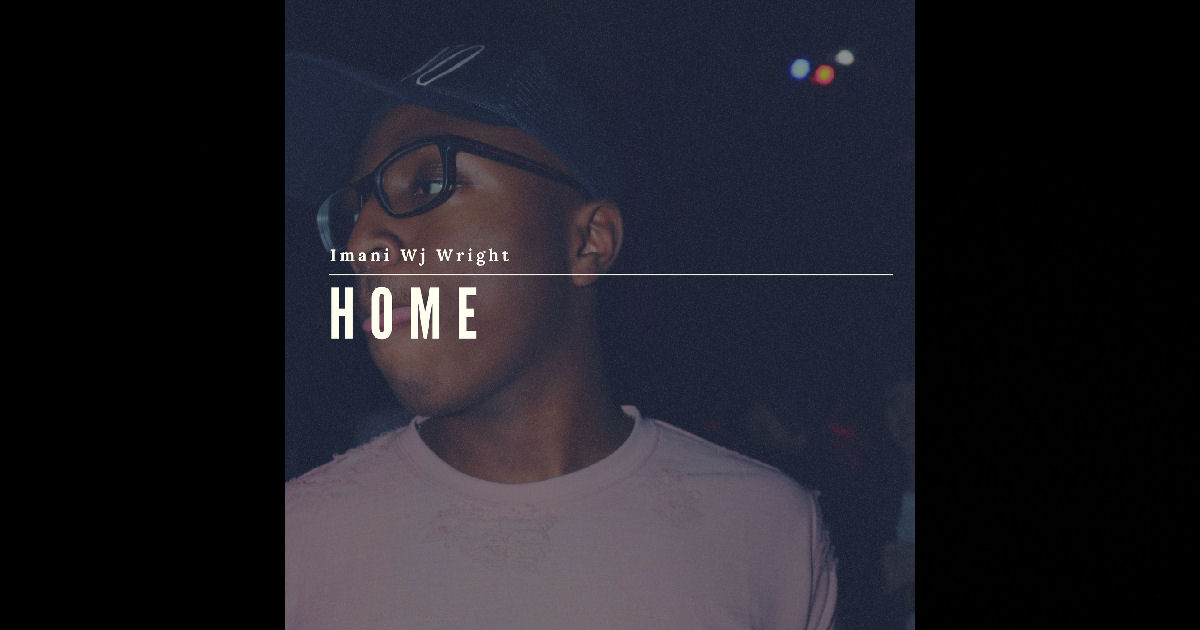 This time I was ready for him.  I mean…when you gotta expect the unexpected, and you’ve learned that as many times as I have in reviewing the music of Imani Wj Wright over the past couple years…well it’s only fair that I was ready for him to put a new twist on his music this time around ain’t it?  He always does!  Of course the ‘what’ he does or ‘how’ he was gonna do it was still a mystery…all I’m saying is I knew better than to expect whatever I heard the last time around with this consistently creative artist – he brings something fresh to the speakers every time I get a chance to listen – “Home” is no exception.

Have a listen for yourself…you’ll know what I mean and I’ll catch up with you on all that once we’re all on the same page – give it a click below!

Right?  First of all – who would work with that beat and melody combo?  Second of all – AWESOME that Imani DID.  I’ve commented upon the courage he has as an artist in the past reviews – but this is a perfect example of what I’ve been talking about all along; beats like this are completely innovative, imaginative, and inventive – not only do they lead to stand-out sounds, but they often inspire OTHER performances to come out just as strong…and I’d argue that’s exactly what’s happened here.  By taking the road less traveled and wandering into a beat that’s anything but typical, Imani’s able to use his avant-garde, non-comformist style and confidently own the mic with whatever it is that he wants to express.  Because it’s uncharted terrain, he gets to dictate the outcome and results, you feel me?  Like I’ve said before also, and I’m sure I’ll say again in the future – those that dig what he does are gonna stick with him – and in my opinion, there’s always been more than enough reasons to wanna do that.  Beats & music like this simply confirm it!

Y’all are probably too young to understand this reference…but back before my day even, they had these wind-up Jack-in-the-Box dudes that played a melody as fast as you could crank the wheel around, eventually revealing the hidden Jack poppin’ out the box once the song was done.  Now…there used to be a few of these still laying around at my Great Aunt Vicki’s house back in the day…and I learned that, even though you COULD crank that wheel at a speed that would play the song in a ‘regular’ way…you COULD also like, remix that sucker too.  You could back it up by cranking it in reverse, you could play things slowly, quickly, slowly…I swear I used to bring the art right to that toy in ways that it was never really designed for…but hey, it sounded cool to me.  And it always seemed to have this like, slightly off-kilter melody and textures to the sound inside of this tin-box that housed the sound & poppin’ Jack inside…again, it’s hard to explain and I suppose a long way of making a short point – but Imani’s using a really wild melody on the surface of this cut that really reminded me of that.  He’s also got really cool piano in the background as well, which is way distant in the mix and sounds like it’s on a constant solo when you do hear it come into the mix…but for the most part, it’s the beat & textured melody I was referencing through that long nostalgic memory I was relatin’ to ya that you’ll hear & notice most.

Well that and the vocals of course…because Imani knocks it out of the park once again with a remarkably fresh performance that demonstrates his finesse & style on the m-i-c.  And if you listen closely to the words ladies…you’ll also hear him talk about the finesse & style he brings to the sheets, know what I’m sayin?’  Yeah you do.  “Home” revolves around the moment itself…not “Home” like the permanent one you grew up in with yo momma – more like the one you head over to with a MILF yo!  Some of that real romantical light-down-low stuff…that’s the vibe that we’re talkin’ bout here in Imani’s new single.  I can’t say 100% for sure that Imani’s makin’ music just to get to the ladies, but I’ll definitely back him up & say that the songs he writes and the way he sings sure can’t be hurtin’ the efforts on a Friday night, you dig?  Being able to sing & express yourself like Imani can is like having your own permanent wingman – that’s wassup.

He continues to bring it, lyrically, musically, performance-wise, production’s on-point…you get it, you get it.  Imani’s solidly dialing-in on the artist he wants to be and really developing that signature style of R&B we’ve come to know, love and respect over the past two years or so.  An artist you can always rely on to bring his own uniqueness and inimitable talents to his material every time – he’s got himself another smooth cut to add to his catalog with his new single “Home” and another track that the people can turn up the volume to while they turn the lights down low.