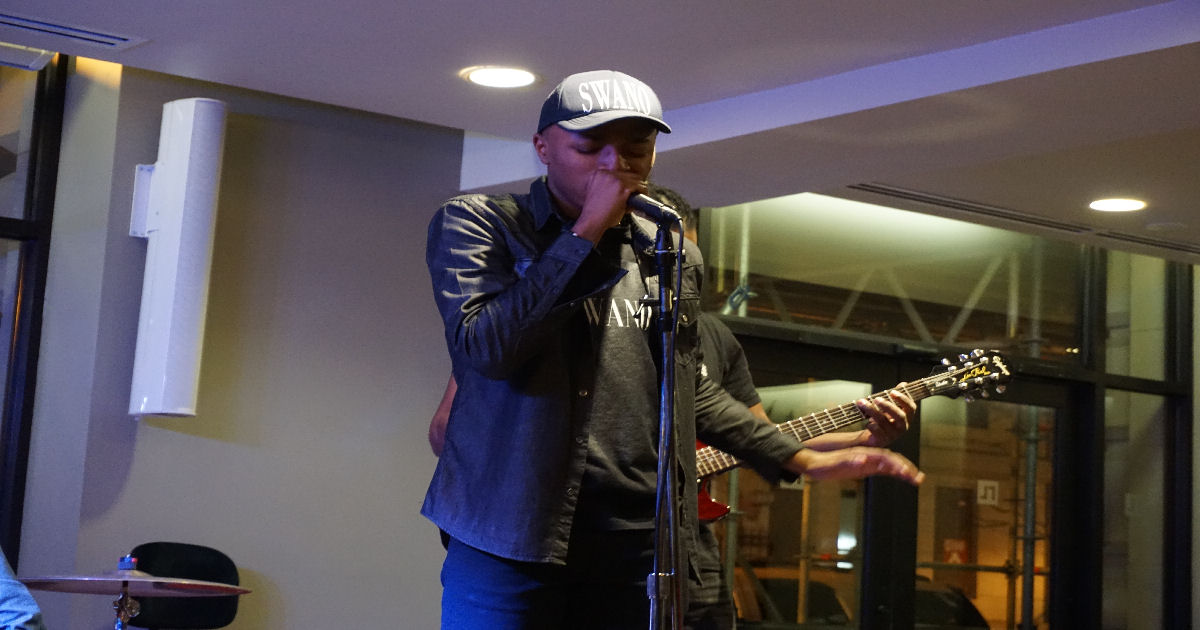 Gotta say – I’m really enjoying watching/listening to Imani Wj Wright’s music evolve.  Even from a distance, if you get exposed to enough of someone’s art or music, you can get a real sense of satisfaction in seeing an artist blossom into their own and navigate their way through the scene.  After checking out a handful of singles in a review last year, Imani’s music caught my attention for the uniqueness in his sound from track-to-track and his fearless approach to multiple vocal-styles.  There is a level of courageousness in his style that allows him to really feel the vibe and get right into the atmosphere of the music surrounding him…and whatever that vibe might be like he’ll find a way into it.

But you definitely can’t pigeon-hole this talented guy in such a way that you could ever define him as any one-thing or limit a description of his music to any single dimension of his ideas or sound; Imani Wj Wright is an artist that will likely always keep us guessing as to what comes next – and I really dig that.

How do you like your coffee folks?  You like it in the studio?  You like it LIVE?  What’s good people?  Tell you what – we’ll serve it up to you both ways – Imani’s got a “Coffee Cup” version in both styles to bring it right to your table, hot & fresh.

When I listened to the studio version of “Coffee Cup” – I felt like I knew what I was listening to in terms of how it’s written…like you can feel that this song is meant to be jammed-out and let the vibe of the music take Imani’s vocals in whatever direction he’s inspired to go in…like a free-flowing thought kind of cut.  Imani does a good job of recreating that environment in the studio – but ultimately, you can really hear the live-potential for a track like this to exist and how that would be the place for a song like this to really thrive.  You could call it chilled-out R&B…artistic, poetic, even experimental or jazzy with notes of hip-hop or spoken-word thrown in the mix for good measure…the music has a subtle & captivating sound to it that really satisfies and sets your whole soul at ease.  Imani has several highlight moments in his vocals along the way through his avant-garde approach; you get additional rasp in his tone that works great when the music gets the fullest around him, and when he chooses to go smoother, he glides along the guitar melody supplied by featured guest Mū making the magic happen.  I dig “Coffee Cup” though – it’s massively anti-typical in almost every way, once again revealing the gigantic hole that currently exists in music out there for an artist like Imani to slide right into and make a career out of.

Where this song reveals its full potential is in the live-setting – so make sure you click that up top and have a look & a listen…because there’s a real heartbeat to this song that exists when you see it come together as it was meant to – from up on stage.  Wike World TV caught an awesome performance of “Coffee Cup” – there’s actually a whole set from Imani from this session out there & available online to go with it as well.  But you’ll see what I mean in terms of where a song like this finds its real strengths through the way Imani and the lineup of talent surrounding him onstage come into play; “Coffee Cup” gets that freedom to expand on its main ideas and take it even further on an artistic-level and let that moment take hold as it should.  You can watch thousands of bands up on stage in-person or online – and I can guarantee you that in 99.9% of those cases where you get visual accompaniment to go with the music, it’s seeing the commitment in the artists performing that stays memorable long after the music.  A song like “Coffee Cup” is certainly decent on its own in a studio setting – but just like a good cup of Joe, it can often be that much better when you share it with others…like getting together with your friends to jam out on a new tune like the six players onstage are in the live version of “Coffee Cup.”  I loved how much of Imani’s personality you get to see through his performance, the band all sound solid and holding their own while putting a new spin on the song’s music in collaboration – but perhaps more importantly than all things, you can see that each and every one of them is feeling this and right into it.  That’s the magic…that’s what matters…it’s right there on all their faces.  That kind of focus, enthusiasm and passion for the art of playing music live and being so unafraid to tackle what might be considered by many out there to be a difficult song to pull-off in a set…it all adds up to a memorable moment in time whereby they really take you with them because they are ALL RIGHT THERE in the present & immersed.  No one on stage is thinking about the shopping they need to get done or the groceries they need to buy – seriously, take a good look at all the players up there and you’ll see that everyone is absorbed & invested right into the moment and confidently making music into art.

And I highly suspect…after all I’ve listened to & experienced from this artist over these past months, that shining a spotlight on the artistic-side of music & expression is exactly what Imani Wj Wright is here to make happen.

Find out more for yourself and check out Imani Wj Wright’s official page at Facebook:  https://www.facebook.com/ImaniWjWright/