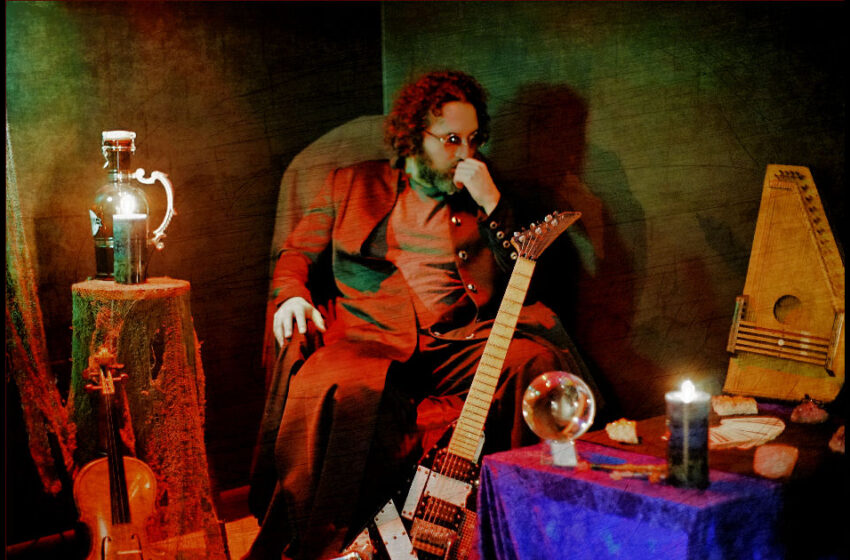 Hey now – there we go!  I quibbled with this dude about how long he’d actually been away for in the last review I wrote on Herman Martinez’s music on our pages back towards the end of 2021 – but to be totally fair, I’m just as apt to celebrate when the tunes are flowing on the regular.  So congrats brother!  It’s great to have this guy back in action already, ahead of schedule by my calculations, doin’ his thang the way that only Herman can, with all the natural instincts he’s got, and the innovative uniqueness he brings to this scene we share.  As you can tell from the photo up top…or the photos attached to any review I’ve written on this dude’s music for that matter…Martinez ain’t exactly like the rest of the folks out there…I’m thinkin’ he grew up playin’ in a different sandbox than the rest of us kids did, you follow?

But generally speaking, as all three of my regular readers know, those are the types of people that grow up into the artists that interest me today, and Martinez has certainly been one of those for years now.  From his earliest work on Solopsi Radio, straight on through to his most recent record Continuity Errors, and everything I’ve found in between & featured on the SBS Podcast or at the SBS Secret Stash Of Stellar Singles – I’ve kept my enthusiasm about Herman’s music no secret from any of you if you’ve been paying attention.  So like I was saying…there’s at least three people out there that I can count on for doing that.

Anyhow!  All self-deprecating jokes about my turmoil in the black hole of anonymity that is the internet aside – word on the street is that Herman’s been workin’ on a brand-new record again, which is always welcome news in the world I’m living in.  I’ve got the first couple of tracks here in advance – songs called “One Hit Wander” and “DEFACTO PROTAGONIST” – and yes…I’m proud to report that I like what I’m hearing so far!  I wouldn’t really expect otherwise when it comes to this fine chap – Martinez knows what he’s doing at this point in his career, and has a better understanding of the sound he’s going for than the vast majority of musicians ever will.  If you factor all that in, hearing things continuing to progress and quality results comes naturally to an artist like Herman…he’s genuinely interested & invested in making unique music that’s different than the rest and further developing the sound he’s been creating over the years.

Dude’s got a penchant for being INTERESTING – and I dig that about The Hermanator.  “One Hit Wander” with its glass-like, crystalline, piano-led melody instantly makes an impact by the opposite of what ya might expect from Martinez – he goes with a much gentler approach than we typically find with his music…not entirely unheard of, but less commonly found in his material.  It’s a really well thought-out pattern on the piano, intricate, involved, and intimate at the same time – almost like what you’d expect to find when the Grunge bands of the 90s were rocking their performances in MTV’s Unplugged sessions, you know what I mean?  Lyrically, Herman’s always a bit tougher to follow from point-A to point-B than most artists tend to be, but you’ll catch fragments along the way that’ll make sense to ya, and heck, maybe might even be a bit more relatable than you’d assume.  I’m well familiar with the fact that Herman’s vocals, while on-point for what he’s looking to create, always present a challenge or two for the everyday listeners out there that aren’t attuned to his music yet or just discovering it for the first time – all I can recommend in that regard is that ya stick with him…you’ll be surprised at just how much his sound grows on you over time.  Where he absolutely shines on “One Hit Wander” is right there in the highest & most demanding notes he’s got, generally surrounding the verses – the vocalizations that aren’t words, but completely essential parts of the melody…y’all know what I’m talking about, and you’ll know what I mean when you hear’em.  Beyond that, musically, when you hear the shift occur just past the 2:15 mark, you’ll find that Martinez excels & surges into the most artistically unique moments of the instrumentation, revealing ideas in the music that have seriously engaging depth to them that make an impact beyond the words he’s singing on “One Hit Wander.”  I also really like the way he sings the end line of his verses…the “there you are” line…he’s so right on the money there & locked right into the best parts of the low-end in his vocal melody…you only get it twice in “One Hit Wander” so pay attention!

In many ways, “DEFACTO PROTAGONIST” is closer to what you’d probably expect to find from Herman Martinez and a more logical progression from what you know in his music to where he’s at now as an artist than the larger artistic gap that “One Hit Wander” attempts.  I still think he’s gotta watch the vocals in terms of finding a way to bring a bit more variation to the patterns & tones he chooses – but that’s a much different comment than being opposed to what I hear, you dig?  I like that each time out, Herman gets stronger, more confident, and does try more things – I’m simply saying he’s still got plenty of room to bring even more variation to that particular department, if only to match the sheer variety he’s bringing to his music.  “DEFACTO PROTAGONIST” has an audible TON of positives to it…especially in the instrumentation – he’s got major hooks and appeal working in his favor right from the very beginning here, using repetition to his advantage.  Sometimes I felt like there were spots where, when the music reached its highest degrees of subtle intensity, the vocals could probably come up a bit in those moments and it wouldn’t hurt him…I suppose what we expect is that when things tend to get BIGGER, they’re supposed to sound that way too…but if I’m being real with ya, Herman’s somehow achieved the opposite effect here…and I’m not quite sure how he did that exactly, or if that’ll pay off for him in the end.  I guess it’s a roundabout way of saying there’s a bit of punch and dynamism missing from the mix on “DEFACTO PROTAGONIST” at points where you’d expect to find it…but ideas-wise, I’d probably be apt to put this right up there with the strongest material in his catalog.  So…yeah…I mean…again, it really depends on what he’s going for – I’m not necessarily saying he should take my advice, I’m just some dude sitting on a computer typing out words with next to no musical talent and barely any valid insight these days – but he’s got time in between now & when the new record comes out to potentially make a few tweaks and see what he can do to get the very best out of his tunes.  Right around that 2:25 mark…I personally feel like everything’s gotta find that spark and come outta the dust there…it’s still that main repetition we hear on the surface, which is cool, but at that point on “DEFACTO PROTAGONIST,” there is SO MUCH KICKASS STUFF goin’ on that you don’t wanna mask it too much, lest it not be heard as it should be, you dig?  The piano melody is killer, the guitar solo towards the end is stellar, the whole groove he’s got here works brilliantly…the drums are wildly inventive too…” DEFACTO PROTAGONIST” really has a LOT going for it – and if I was Herman, I’d be inclined to make sure we get a chance to hear it all.  Ain’t a matter of volume over here, that I can assure ya – I keep this guy’s music turned up loud & proud – but you’ll hear that “DEFACTO PROTAGONIST” almost seems to disappear on itself like Marty McFly out of a family picture…and while that could very well BE Herman’s intentions, it’s hard to say how that’ll go down in the court of public opinion and whether or not he’s quite gone as BIG as he potentially should on this cut.  The ideas are there, time is on his side, and he’s got the talent to make it happen if that’s what he wants to do…and of course, we’ll all find out soon enough when that next record comes out.

Safe to say, he’s well on his way to another compelling record filled with that innovative and adventurous Herman Martinez signature sound we know & love, but fueled by more artistic ambition if these tracks are any indication of what we can expect to find.  As usual, I’m looking forward to hearing what the man comes up with…it’s truly always an experience & an all-out trip listening to Herman Martinez…I’m excited to hear the rest of what he’s coming up with & see how this next audible odyssey he’s got cookin’ continues to take shape over time.

Find out more about Herman Martinez at the official pages below!