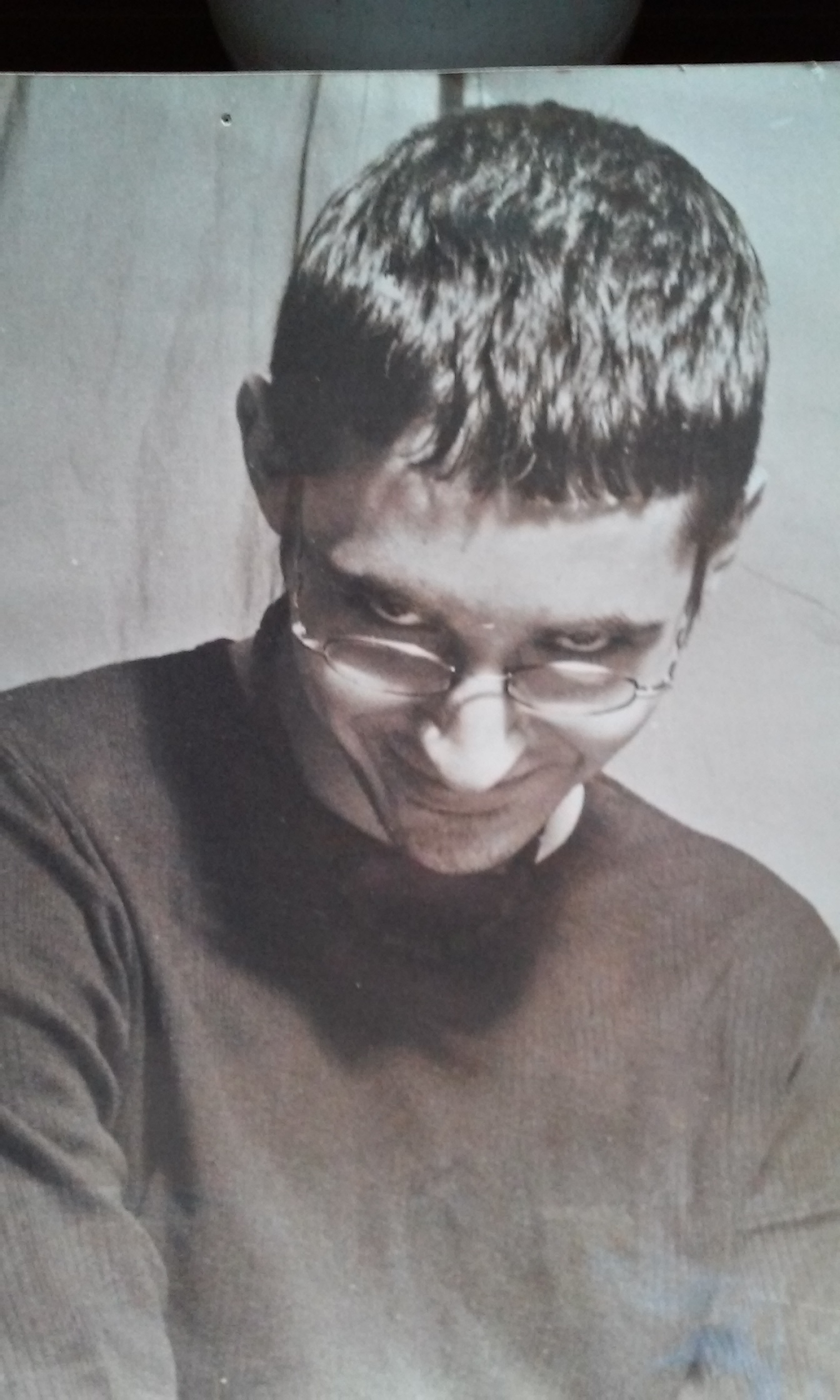 Welcome to the verifiable musical-mind & mayhem of Herman Martinez…which, for those that don’t know would be something similar to a full-on maze or labyrinth of sorts; mired in the dark-sludge and grind of a real grunge-rock sound…the music on Solopsi Radio is intense, heavy in sound and heavily-loaded in skill. They’re also gigantic, expanded and ever-evolving ideas that really find their way to multiple-layers and clever transitions in what often feels like that awesome 3-or-4-for-1 bonus of the Inception-esque song-within-a-song-within-a-song style that Herman often writes in. Progressive-grunge? Is that a thing? I think if it wasn’t before, Herman’s making a strong case for it here.  With the enlisted talent and support of Ahmed Mahmoud his close friend, ally and producer…these two have certainly taken on an extreme undertaking and adventure in sound in bringing Solopsi Radio to life and pulled this off incredibly well.

Of course…with lengthy, expanded-ideas and musicianship…you slightly risk the attention of the mass-population staying-put for the duration of six-minute-plus long songs…but Herman knows that already. It’s a fairly safe bet that when you hear this kind of effort to real-writing take place that the creators, authors & musicians behind it all are doing it for the art…and even within a grungey-layer of heavy-atmospheres…you can still make music into art – and I think there’s a lot of that on display here on Solopsi Radio.

Starting out with an epic…a brief intro shifts quickly into killer riff-rock and a resulting heavy-grind on “Phonic Chronicles” with harmonies much similar to the infamous sound found in Alice In Chains. There’s definitely a dark-presence that instantly looms like a shadow full of personal-demons much like what I felt like dominated the atmosphere on Dave Navarro’s first solo-album Trust No One. Wherever Herman Martinez is coming from is definitely a perspective that reveals an intense love for the genres of grunge, rock & progressive-metal music…his ideas and instincts are wicked and the transitions in “Phonic Chronicles” are completely jolting in all the raddest of ways. Clever breakdowns like before the five-minute mark send him into some audibly-fantastic highlights on guitar…some of the best moments definitely come right towards the end as this song grinds gear-after-gear together and the sound continues to build massively upon itself. Vocally…much like Alice In Chains and Navarro…many of the lines are approached with dissonance to their tones…which again will appeal to some more than others.

To continue further with the Navarro comparison…I’d definitely cite “Fictional Realism” and how similarly it kicks-in to a song like “Rexall” does. A great crisp, snap to the beat with the vocals and harmonies on this second tune from Herman. I dig the darker, nearly Cornell-esque approach to a lot of “Fictional Realism” in the verse…it’s still slow-burning below the natural tones you’d expect to hear paired with the music itself…but for those that like their music stuck into a gritty, grimey vein – shouldn’t be anything stopping you from digging this. The two main-defined parts of “Fictional Realism” are pretty widespread and should give everyone a little something to find their way into Herman’s music through this second tune which is probably much more accessible to many in comparison to the opener.

Awesome instincts through the rhythmic drumbeats of “Spoonbender” – which while I dig it personally…I could also see this potentially being one of the more polarizing-tunes on this record that would spark the debate for people as to whether or not they’re with Herman until the end of this album. I could say for certain that fans of bands we’ve covered like Lung Flower, The Last Surrealist and Charming Timur would definitely get a lot out of this album…there are a ton of ideas that are just slightly off-kilter and purposely made with a dedication to style that I know fans of the grunge/sludge/psych-rock fans will definitely dig. “Spoonbender” has the audio bending in the pitch cleverly to go along thematically with the subject and music…I figure that’s the kind of thing you either pick-up on or you don’t; consequences of course being that if you don’t really listen to that…and the precision that’s actually put into how it’s done…well…it would just sound bizarre I suppose.  I think it’s inventive…not the typical sound you’ll find vocalists brave enough to explore all that often – you gotta respect that.

I like how “Every Letter I’ve Ever Sent” almost sounds like there’s a classically-trained guitarist in Herman…there very well might be. There is certainly a musical-mastermind here…there’s no doubt about that – the complex composition of “Every Letter I’ve Ever Sent” will completely fool you with how simplistic & natural some of the melodies sound…but this song goes on to reveal an extraordinary depth of writing and many, many different parts. At times vocally reminding me of a low-growling Eddit Vedder…or the rasp from Brother Cane or Lifehouse…they fit really well…especially right around heading into the three-minute mark – Herman sounds full of bright-tone, energy and raw-confidence. Lyrically this song weaves through some incredible lines of personal-reflection that match the emotion and the tone of the music’s mood & atmosphere stunningly. The breakdowns & all-instrumental parts of “Every Letter I’ve Ever Sent” work just as epically as the parts with vocals…the extended piano/haunting-synth sounds that end the song sound absolutely brilliant.

If I had to hazard a guess in listening to this record…I’d also say we’ve got a fan of Days Of The New from back in the day as well. Much of the production on this record sounds similar to their self-titled debut record…you can hear it hanging in the atmosphere of tracks like “Dogon With The Wind” even if the song itself sounds a little more raw/rock than anything DOTN ever really went for. “Dogon With The Wind” kind of reminds me of a sound like theirs crossed with the attack of a band like King’s X…but again the resulting combination of the complexity and challenging assembly & structure of these songs has been monumental in size & scope…and Herman seems to pull this all off exceedingly well throughout this record.

Musically I think that “Sculptor” hits the mark with a space-like vibe that’s distant and spread-out as the song begins. As it progresses…reminds me of bands I love like Failure and Quicksand through the low-end punch to the kick sounds. Vocally…I think this is without question going to be the toughest track for many to love…those dissonant-tones take over the melody in ways that tend to clash & contrast just a bit too jarringly. Considering the music itself drifts often into brighter atmospheres with piano-keys laced into it…you can hear the effort made for that pairing of light & dark on “Sculptor” when the vocals are present…but I’m not so sure it quite hit the mark for me in execution so much as it did in idea itself.

“Verse Chorus Universe” recaptures much of what I like best about Martinez’s music and sound…leaning towards the darker rumble & energy to the chorus of this tune. One of my favourite guitar parts on the entire album is the tiny solo that occurs just after the three-minute mark and carries on subtly for nearly a full-minute before a different riff storms overtop to take over the song completely. Really wicked theatrics and dynamics from Herman that certainly showcase that there are so many more aspects of his music than just the parts with vocals – there’s a real focus on interesting textures and cleverly-layered atmospheres through the instrumentation and I really appreciate hearing that amount of variation and real-experience that you get out of Solopsi Radio.

“Healing Factor” comes a little out of left-field for what we’ve heard so far. Not enough to feel like it doesn’t belong, but different enough to stick out entirely as quite unique from the rest. Driving hard through a melodic electro and more sonically-spectacular sprawling-guitars…as an audiophile – this has got to be one of the favourites on this record for the pure texture and depth of sound. It has frequencies and tones that will make the hairs on your neck stand on it…others sound brilliantly inviting and warm…like there is something pulling you into “Healing Factor” but you’re not quite sure how dangerous it’ll become if you head with it down the rabbit hole. Bending your WHOLE FACE around with some truly innovative ideas experimented with towards the end of “Healing Factor” – this side-step out to a new sound momentarily actually does quite a lot to break-up the sound of this record in a great way. Herman will come back with “Clusterflux” right afterwards, which will have him at his absolute best on the album so far. Reminding me more of bands like Minus The Bear on a song like this…the quick groove and rhythm are established on all-fronts from drums to bass to the signature guitar-work of Martinez. There’s rock…there’s mystery…there’s real WRITING here on this record…and MAN do I appreciate that as a guy that listens to music all-day every-day! The bright melodic guitar-notes in the blazing-speed of the verse have that floating or slow-motion effect to what’s really moving quickly; the chorus moves into much more spacious terrain and territory…the guitar at the end of “Clusterflux” ends the song shining in an extraordinary light…certainly a memorable highlight on this record.

The tribal, menacing & dark rhythm of “Recreate” definitely puts Herman straight into the dirt six-feet under to find the pulse of this dank-ass groove. I honestly don’t quite know what it is about this song…in some ways I feel like there’s something to out of the ordinary for people to catch what’s up here…but at the same time…isn’t this the most brilliant song on the entire record? In some ways…I’d think it would encourage Herman to explore shorter-length tunes as this entire idea just works with its hypnotic, dark-rhythms really feeling cohesive and massively focused. There’s a real commitment to the performance on this particular tune that I find myself digging more than most of the rest…just feels like Martinez has really embraced the darkness and atmosphere of this song and found a way to break the chains holding him with the uplifting, empowerment you can find in the lyrics. Even in the shortest tune on the album, “Recreate” still finds insightful ways to change…the breakdown of this song is one thing; the bring-back is an entirely different and formidable BEAST as this track rages to its end and into the final song, “Her Eyes An Event.”

I think that the final tune does a lot of justice to the writing of this record and gives Solopsi Radio the ending that it deserves…even if once again Herman’s reaching into slightly less-accessible terrain on “Her Eyes An Event.” In a lot of ways I feel that this entire album is really one written by a musician, for musicians…know what I mean? The amount of dedication to the writing and craft here is definitely one to be recognized for its mountain-sized ambitions…ideas that are fully realized and brought to life with precision and a whole stack of skill from Herman Martinez. The amount of parts, twists and turns of “Her Eyes An Event” is staggering…and though sometimes it feels as if they’re about to wander off into oblivion…he always finds ingenious ways to pull you right back into the next part, segment, riff or piece…whatever you want to call it, you’re right there with him on this ride step-for-step and I think that’s the sign of a real writer at work…real effort put in. And the overall result, is REAL results! Solopsi Radio is a multi-layered, multi-faceted album with an extreme depth to its murky-mood that makes for an extraordinary and highly memorable experience to listen to.