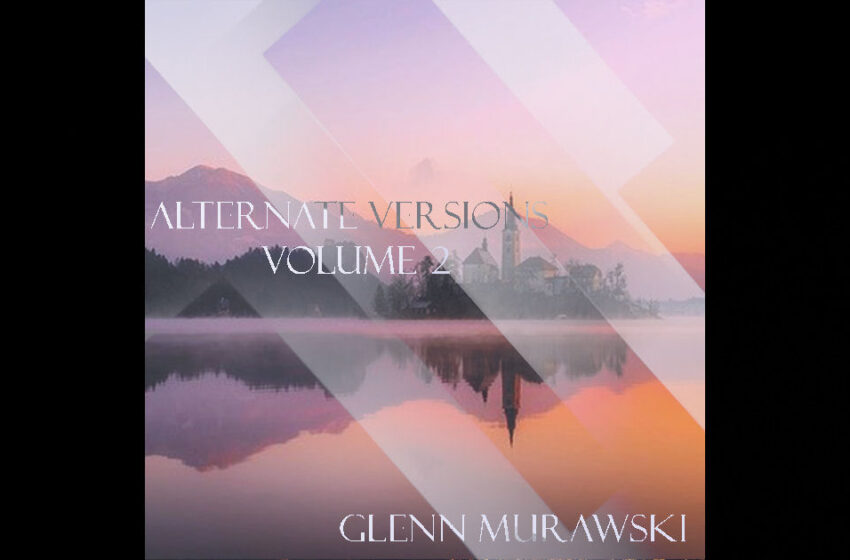 Alright…so…if you aren’t familiar with the name Glenn Murawski after the three reviews we’ve put out on him in this past WEEK alone, you’re clearly not paying that much attention & there ain’t much I can do to help ya I guess.  I know I’M listening…and I suppose I’ll just keep on writing these words down here on our pages until I’m at least reasonably sure that the rest of you out there are too.  We dove into his last full record called Fractured in a wildly fictional way, examined the living daylights outta his Alternate Versions Volume 1 EP just the other day – and now we’ll do our best here to keep ya as current as we can with a review on Volume 2.  Mind you, of course he’s already got new music out there beyond this, a single called “Requiem.”

Lest we forget, this is after all, the year Glenn is ‘slowing down’ – remember?

My hairy fanny he is!  He’s been up here so many times in the past week alone, it’s like his ears must have been burnin’ & he knew I was talking about him in the review I recently wrote on Galliano Sommavilla not too long ago, and took my comments like a challenge to his creative output.  Here we go again – let’s do this!

Volume 1 was an interesting experience to begin with, earlier on this week…and Volume 2 goes on to take this whole new remixing project Murawski’s got goin’ on even further.  What was perhaps most surprising to me about the Volume 1 lineup, was that while I did dig in a little in critique of its overall cohesion, when it came to the strengths of the new versions versus the old, I think I pretty much sided with everything I heard polished up in its shiny & bold form for the new EP – and I didn’t feel that way nearly as much with Volume 2.  I’m never gonna be the guy at the back of the club yelling “just play the hits” or “get to the chorus” – and you’ll never find me being the guy that’s just gonna argue that the original version of a song is ALWAYS better, because that simply ain’t the truth.  Sometimes it is, and that’s more than fair – we all like what we like, love what we love etc. – and it’s more than easy to get caught up in the magic that an original tune provides.  In many cases, these remixes on Volume 2 are more to the story you already know & love, and in a few instances, I felt like that initial magic had me longing for what I found in a few of the original tunes as well.  This EP is still quality as quality gets when it comes to the updated production values & sound & all that…but yeah, more of a mixed bag on Volume 2 when it came to the overall results than I had found I experienced in its predecessor.

Case in-point, the new version of “Blue Skies” would be a tough trade for me personally.  Again, when it comes to the production & sound quality, I think it’s inarguable that Glenn gets a richer, thicker mix on what he’s doing on these remixes, and this first cut definitely has that…I’ll admit, the original is a bit on the thin side as it explored its airy atmospheric vibes.  That being said…the alternate version we experience on this EP is making some extremely decisive choices in terms of what it was that really made the core of the original work, and subtracts a lot of that right on outta here…in my opinion, of course.  Like the rumble of the low-end that came in kickin’ at the 2:18 mark of the original?  Nowhere to be found here now!  I also kind of found myself digging on the original’s tin-melody sound, thin as it might have seemed by comparison, it was still a pretty good fit…I can maybe get behind the update on this part, but I still needed that rumble in there somewhere to feel like this cut had that uplifting thread come in to take over on “Blue Skies.”  As it stands in this alternate cut, Glenn’s still experimenting mainly with the percussion aspect here & the process of substitution & whatnot…which I’ll admit, takes “Blue Skies” into a genuinely fascinating soundscape in this particular version…it’s still a good tune in all forms.  Would it have been a better one with that bass-line rumble comin’ in somewhere?  That might be up for debate…it might be a tougher fit into this one, despite the steady beat…but it IS essential to the original.

“Burning Twilight” still arguably has enough of a thickened sound to match the current production, but is actually a thinner mix than the original offered, allowing the dreamy vibes of the mood & melody to really spread out through your speakers on the alternate version without being dominated as much as they might have been in the first incarnation.  As a result, the low-end string sounds of “Burning Twilight” flow with remarkable fluidity to form the delicate & warm core of this song, followed by an update on the piano keys as well if I’m not mistaken…they sparkle & shine on the surface & sound much more natural & bright in this version to me.  While it’s more of a fraction or a slice of what the original did on a structural level, the beauty of the melody here & its slight tension is well-preserved, if not enhanced in the enchanting results of this charming alternate version.  Shorter by about ninety-seconds or so by comparison to the original, I felt like Glenn made a wise choice in somewhat dialing this one back, reigning it in a little, honing in the major aspects it had from the get-go, and presenting it back to us once again with a dreamier vibe that still has a lil’ subtle drama, but a whole lot of inviting sound too.

It’s hard to improve on perfection, but I’ll be damned if he didn’t somehow on “A Song For Earth,” which was originally found on the very record that landed Glenn Murawski on our top-ten list of 2020 last year.  Everything is clearer here to the nth degree…the swirl of Electro vibes that were once a more dominant aspect are now brilliantly suppressed & threaded expertly into the background…the low-end bass makes a massive impact, and the main melody of the piano remains the star of the show, no matter how much awesomeness might be surrounding it at any time.  Perfect layer of percussion & simple beat introduced to this version as well…insightfully non-invasive, it’s a stellar complement to what’s already working – that original lineup of the 7 Days Of VGM Challenge: The Elements record was as bulletproof as I thought it could get…but I think I might very well have to side with this updated alternate version here if I had to pick one of the two, which thankfully, I don’t really have to at all.  I can have both!  And I will!  And so can you!  For real…I’ve said this a million times, go to the Murawski page at Bandcamp and get yourself some of what this guy has to offer ya…you won’t be disappointed if you have an appreciation for instrumental tunes – Glenn keeps on finding new ways to innovate his sound & style, and the remix on “A Song For Earth” is verifiable proof that he can refine pure gold into…umm…into…uhhh…something golder?  You get what I’m sayin’ – this song came off of a record I was more than proud to put into our top ten last year, so it’s not like I’m tellin’ ya he’s polishing up a turd here – he’s taken a great song and made it greater is what he’s done, and credit where credit is due, that’s not at all an easy thing to do.

“Night Essence” in this new form, is undeniably a tighter tune on a structural level.  As to whether or not replacing the warm & gentle sounds of the original for a bolder & more vibrant mix this time around…I dunno…I’m a little more tossed up on that to be truthful.  I think there’s no argument whatsoever against its shrunken down size, that worked for sure…but there was a real glow in that original version of “Night Essence” that seemed to draw out the soul of that melody in a much more accessible way.  I have no real complaints or issues with the new mix & updates Glenn’s made here…but as to whether or not I felt really strongly one way or the other, and couldn’t really decide…that’s also something to consider too.  I wouldn’t say it’s indifference by any stretch, but it’s a similar feeling in the sense that, “Night Essence” is still a solid track to listen to, I just didn’t feel like this might have been quite enough to warrant the reach back to it for a refresh I suppose.  On the brighter-side, as with anything Murawski, it’s well-played, has a solid core melody at the heart of it all, and layers of emotional textures in sound.

The challenge is officially on.  As he’s proven already, he’s been able to take a great song & make it even greater, as he did earlier with “A Song For Earth” – the real question is, can Glenn unbury himself from what could be more on the not-so-fantastic side of his catalog, like he attempts with “Transient Blue” at the end of Alternate Versions Volume 2.  And the answer is………no!  Not at all.  And that’s OK!  Sometimes a dud is a dud & that’s all there is to it.  I wouldn’t go quite as far as to say that’s what this has been in the first or even second time around, but it’s not too far of a distant cousin to be fair.  The main point I suppose would be, sometimes there’s something worth saving, sometimes there’s not; the question becomes, how do you want to spend your time as an artist & musician – and that’s a question on Mr. Murawski himself can truly answer.  The best way I can put it was that it was both surprising to see it in the lineup to begin with – but also equally surprising to hear that it didn’t really change nearly enough of what was working against it before or bring anything exciting enough to make any major difference in what someone’s assessment would have been with the original…but the reality is, there might not be all that many places this particular track can go, no matter what he might try with it.  In my humble opinion, I think this last cut got away from Murawski a lil’ bit, and the focus on the overall purpose behind what he was looking to do with his remixes might have dropped somewhat at the end.  Some ideas are worth saving and exploring further – and Glenn’s got an outstanding catalog of tunes already at his disposal that he could pull from…it’s genuinely kind of boggling that “Transient Blue” made the cut, but I do respect the fact that Glenn at least gave it a shot on something that was a more awkward fit to start, if only to challenge himself a little more with this whole remix thing he’s doin.’  With time & experience & experimentation, pass or fail, he’ll dial into what he wants to do with these updated versions more & more as time marches on…you have my word on that – Glenn’s always evolving his art & music in some way, shape, or form…or morphing it in new directions…and not matter what the results may ever be, I can guarantee ya he’ll always take you on a unique sonic adventure.

Find out more about the music of Glenn Murawski at the official sites below!