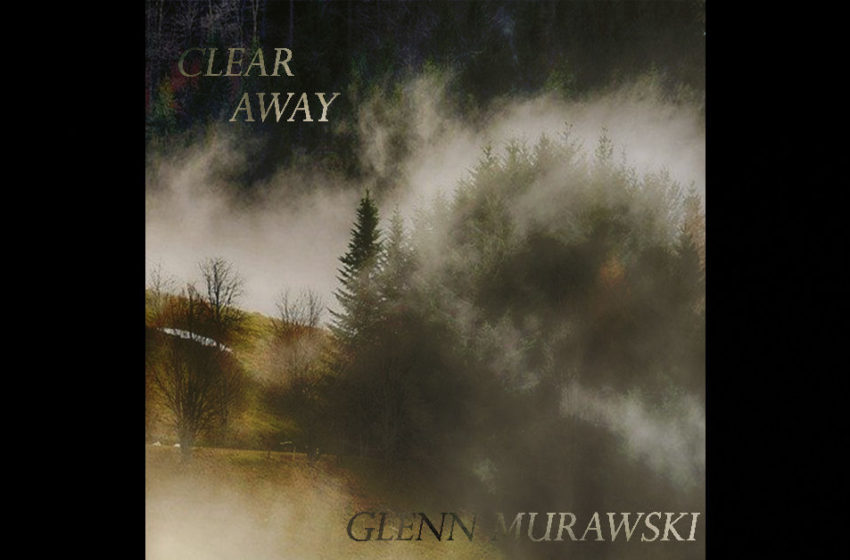 Now here’s a refreshing start to a record!  Things are sounding atmospherically sweet on Glenn’s latest EP, with the sparkling design of its title-track “Clear Away” lighting-up with inspired sound right off the bat.  Solid start for sure…which is to be expected somewhat by now when it comes to the ever-reliable music of Glenn Murawski of course…but the fluorescent vibes that float through this opening tune give the beginning of this particular record a really beautiful gateway into this new lineup of five songs.  The hints of contrast you’ll find in the progression of the melody in the layers underneath the bright sound on the surface add depth & interesting twists that strengthen the structure as it plays on.  In some ways, “Clear Away” remains a little static & arguably fairly within its main gear for the full duration of the song, but being a relatively short tune at just over three-minutes in length, being at the beginning of the record, and still changing enough along the way to keep us engaged…these things play to the advantage of a track like “Clear Away” and make the most of this moment.  Guitars aren’t always the first thing I’d say I notice when it comes to Murawski’s music, but I actually really like what I’m hearing in the acoustic playing the supporting role for the melody throughout the distance of this first track and think it makes all the difference in the world to the overall strength of this tune.  If anything, I might have revisited a way to reconnect those opening piano notes back into the mix further on into “Clear Away” – Glenn might have passed up on an opportunity there perhaps…after that first forty-five seconds, things change and morph…and yes, the piano part is replaced with other elements that’ll catch your ears & keep ya entertained of course…but yeah…can’t help but think the biggest hooks might be right up front on this cut.  I like the subtle way it changes…and I dig on the warm glow & spirit this song continues to dive into, but whenever I looped around to this song again, it always felt like the first fifteen-thirty seconds or so contained a real magic that could have potentially been explored even more.  And who knows – maybe it will be in the future…maybe I’m greedy & I should just shut up & enjoy what I’ve got here…it’s hard to say for sure…Glenn Murawski ain’t the type to sit still & he’s always moving right onto the next project.  Whether or not there could have been more to it than there is, I still think “Clear Away” is an enticing & appealing tune that’s got a subtle, humble, and majestic sound at the core of its melody that’ll connect.

“Pax Aeterna” is right where I’m at – this is essentially a fully preserved, perfect moment in time.  Weighing-in at just a minute & forty-nine seconds long, it’s by far the shortest track in this lineup, and indeed compared to much of Murawski’s rapidly growing catalog…but I’d be taking a good look at “Pax Aeterna” if I was Glenn, and really examining what it is about this track that hits the mark on all levels.  That’s not to say this dude can’t knock it out of the park on longer songs – he’s demonstrated that plenty already in the past (See: ANY record by Glenn Murawski) – but the undeniable tightness in this dreamy second track can’t be denied either.  There’s no time to be wasted here, nor will you find Glenn squandering a single morsel of this moment – “Pax Aeterna” is exquisitely stunning, immaculately clear, and built upon sounds that are endlessly pleasing to listen to.  And I mean that…I mean, I always mean what I say, but particularly the ‘endlessly’ part here…I must have at one point put this soul-soothing song on for about an hour or two straight, fully immersed in the serenity & calm this meditative tune provides.  So believe me when I say, I’ve road-tested the sparkling beauty to be found in “Pax Aeterna” – and if it weren’t for all these other damn responsibilities that keep popping up in life, I’d probably STILL be listening to this one tune, over and over, happily lost in the fog of my thoughts for the rest of time.

The longest cut on the record, “Forthcoming,” is right in the middle of the lineup of the Clear Away EP.  Heading in the opposite direction of “Pax Aeterna” just prior, Glenn dives full-on into a nearly ten-minute tune with “Forthcoming,” which for reference, is like the size of five “Pax Aeterna” tracks.  It’s harder to say whether or not this cut will pay off for him like it’s worth five times the duration by comparison…I have my suspicions that Glenn might have held on a little long to this one, despite the noteworthy switch in direction the song will take near its mid-point.  For myself personally, I found myself really appreciating its more atmospherically-inclined first-half, especially in the more distant layers like the vocal-samples that soar angelically through the air as you listen, or the emotional suspense that comes along with the string sounds.  While this front-half of “Forthcoming” is set more in a somber mood and isn’t likely going to make you get up and dance by any stretch of the imagination, there’s real value in the hypnotic way the downward melodic progression puts a spell on you and keeps you locked right into the vibe, fully captivated.  When the main switch occurs just prior to the five-minute mark…I dunno…I can hear a few clashing tones that take away from the melody, and if I’m being entirely honest…I probably would have broken this one song up into two songs.  The argument being that, you always want that next part of a song to complement or build upon the first…and I’m not entirely sure this one does.  I think things smooth out a bit around the 6:30 mark…and I like the breakdown that occurs around the 8:00 mark & the clarity that comes with it, allowing the guitar/piano to deservedly take the spotlight for a while.  Once again though, I think the real magic of “Forthcoming” comes from the beginning of this song; something about the isolated hollowness really works in favor of the melody and suits the idea the strongest…the added energy in the second-half, maybe not as much.

Perhaps the best way to put it, would be to say that you can hear how a moment like “Pax Aeterna” comes along much more once in a lifetime, whereas you could potentially stumble into the main ideas, melodies, and riffs that form the core of tunes like “Forthcoming” and “Predetermination” on your own.  Don’t get me wrong, they’re still decent tracks and healthy new additions to Glenn’s catalog that confirm his consistency…but yeah, I’d be lying if I didn’t say that “Pax Aeterna,” as short as it may be, really stands out for the uniqueness you’ll find there.  Closest comparison I’ve got is actually to something like Aphex Twin believe it or not…if you’ve heard the Drukqs record you’ll get what I mean; “Pax Aeterna” is a lot like the stunning low-key instrumentals you can find outside of the crazy Electro scattered throughout that album.  Anyhow…you get it by now I’m sure…my vote still lies with “Pax Aeterna” making the biggest impact in what’s certainly the shortest amount of time.  “Predetermination” I felt came out with a great mix of engaging sound that had just the right amount of tension, movement, and tone to pull us in.  The string sounds that come in eventually to support the lead work well…though hearing it bare-bones could potentially be equally effective & perhaps a bit more so, like you find at the very beginning of the song.  Everything’s gotta change somehow, and I get that…that’s of course what keeps us listening…I shouldn’t really complain, because I do like what I’m hearing overall…I suppose I just hear a bit more opportunity within “Predetermination” that Murawski could have explored, or space to challenge himself a little more inside of.  I’d be the last person to say that creating a song like “Predetermination” would be easy…but I also have no problem with saying that when it comes to what we know Glenn to be capable of, that this might just be easy for HIM, you know what I mean?  You can always hear the spark of inspiration when its prevalent…”Predetermination” has a slightly noticeable absence of that feeling by comparison to the majority of the Glenn Murawski’s music, but it does somewhat make up for it through the crystal clear production & professional performance he puts in.  Definitely still a cut worth your time…I’d never think to argue against that.

Maybe it’s just more of a matter of, when an artist or band really gets it right, that’s all there is to it, plain & simple…and whatever that sound or song may be, reveals them right in their element and in the moment where they truly belong.  It felt like “L’immagine Più Grande” restored that specialness I’m always seeking out in Murawski’s music…there’s an exceptional amount of beauty to be found in this final tune from the Clear Away EP.  I’d likely advocate most strongly on behalf of the beginning yet again, but I think the extra pep in the step of “L’immagine Più Grande” also has its own appeal; if anything, I’d say the pull towards the opening of all the tracks reveals much more about me and what I personally love about Glenn’s music than it does about his own songwriting & compositions, so take that to heart.  He’s always got more in-store for you with the changes, twists, and turns on any given tune – like I told ya earlier, he’s not the type to sit still for very long – and of course, in the interest of keeping people interested, that’s a good thing.  We want songs to change, evolve, expand, grow, and blossom.  You’ll find that “L’immagine Più Grande” makes the most of its movement & structure in that respect, springing to life in a vibrantly colorful shift just prior to the three-minute mark…the strings sound gorgeous…the gentle beat is a solid complement for the next minute, before switching it up yet again to add a layer of catchiness through the franticness of the scattered Electro-drums.  From where it all started with its amazing low-key melody & ambient sound, to the full-on IDM-inspired frenzy it becomes by the end, like I said…there’s no doubt that you get the expansion & evolution you’re looking for on the inside of a composition here.  That being said…when it comes to the first nearly three-minutes of this song, I want to put like, my whole FACE right into the speakers to absorb every single second of “L’immagine Più Grande” – the musicianship is beyond magnificent and the beauty is beyond compare.  Combined with the ambient background lining the atmosphere, the texture of this final track leaps out at you throughout its first three minutes through the emotionally gripping sound you’ll find, long before Glenn Murawski brings in a single beat to support it.  He’s certainly giving “Pax Aeterna” a solid run for top spot with “L’immagine Più Grande” – there’s no doubt that Glenn’s ending on a highlight with the final song on the Clear Away EP to put the cap on another solidly creative & enchanting experience.

You know you can get Glenn Murawski’s music FREE at Bandcamp right?  Or even better, chip in a few bucks to support the man on his never-ending musical mission!  Either way, I suggest you do the right thing for yourself and head on over there to get some new tunes for your playlist from an artist you know you can count on.  Find Glenn Murawski at Bandcamp here:  https://glennmurawski.bandcamp.com/music