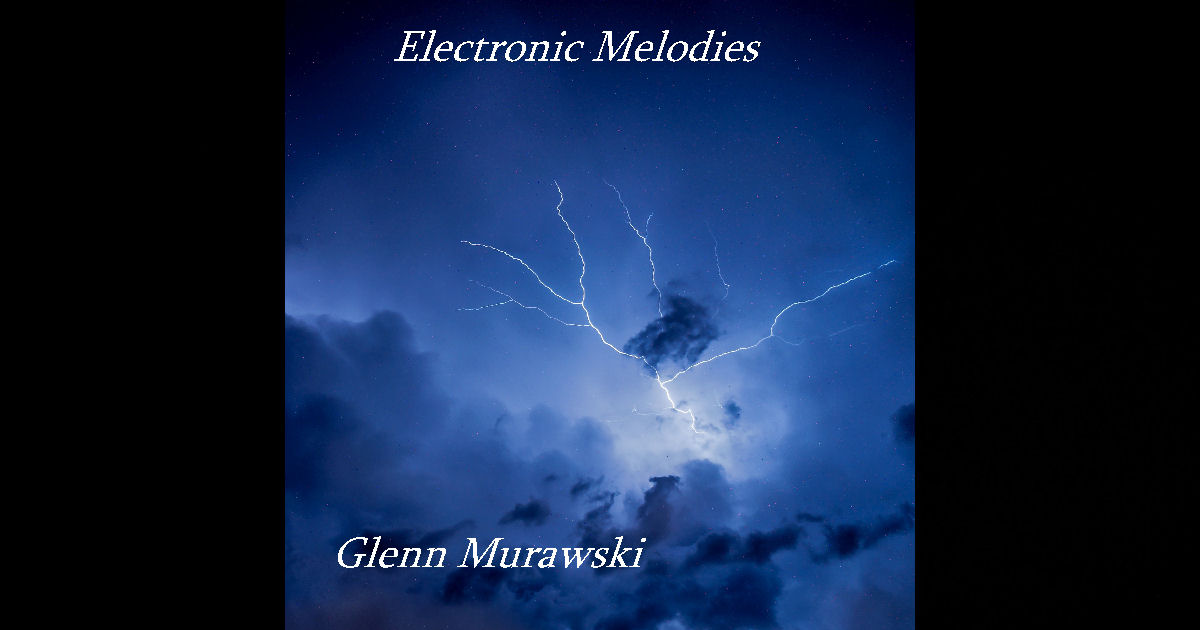 So far as to this point on our pages, we’ve featured the music of Glenn Murawski three other times over the same amount of months more or less, but yet to hear him & vocals into the tunes we’d experienced here at our site, which is about to change with the release of his EP, Electronic Melodies.  There’s still a whole bunch of instrumentals in the mix for ya as well…four of the six in-fact…but the other two cuts on Electronic Melodies put the man behind the music in front of the mic for a change, with varied results.

I’ll say this before we get started into this lineup of tunes…Glenn’s got a way with music that has never required vocals…and that’s a testament to his creativity on an instrumental, compositional, & structural level, he’s always managed to keep us interested & highly engaged without a single solitary word.  As I’ve mentioned just about as many times as I’ve written reviews, it’s all about knowing what serves & suits a song best – and in the past, Glenn’s drawn that line in the sand firmly, assembling tightly composed, stunning & moving instrumentals that combine electro & traditional instrumentation throughout the various tunes of his catalog.  I’m all about branching out even further in whatever your art may be…challenging yourself as an artist, for better or for worse; adding a new dimension to your sound, evolving, growing, and expanding it over time in whatever way, is always something I’ll respect.

When the beat kicks-in to “Lost (Vocal Mix)” to start up the record, things get exciting, immediately.  The high-frequency sounds intensely moving around, crisp beat, the haunting-but-melodic melody on the keys that comes in soon afterwards & flute sounds are extraordinary additions – everything in the music stacks up big-time & presents some of Glenn’s best right off the drop.  Really rad ideas with the strings that come in later on as well to fuel the last minute of “Lost (Vocal Mix)” as the song switches to an instrumentally-inclined finale.  For those of you that dig your Murawski music without vocals, he’s also got you covered by featuring both this song and the other vocalized track “Waiting” in instrumental versions at the end of this record as well.  All that being said, these are all comments on the music that you can certainly apply to my thoughts on the version that appears later on as well…but it’s this first cut that’s got Glenn on the mic – so let’s discuss that for a second or two.  I’m probably not so much mixed on my feelings about the addition of vocals here as I am fairly sure this is one of those cuts that might not have needed’em…or if it was to have’em, then a stronger reason to be included than what we find.  Ultimately, I’m fine with the melody & pattern of the flow of the vocals, it works with the beat well enough – but that’s just the thing…Glenn’s gotta find the right music to go with that beat for the vocals to thrive in, and I’m not so convinced that jumping in on this particular track was what suited “Lost.”  The dissonant tones that come out flat or the muddled mix of effects working against the brightness of the melody in the music, particularly when you’re hearing it expand in sweetness with the addition of the flute sounds, all kinda ends up taking away from that beauty he’s created in the music on this tune as a result…and of course, there’s risk in moves like that.  When it comes to the decision between the instrumental version of “Lost” and the “Lost (Vocal Mix)” I’m probably hands-down on the side of the version without vocals personally…though the choice wasn’t as easy with “Waiting” later on in the EP.

The longest song on the record comes next, with “Electric Eclipse” weighing-in at just over five-minutes.  One of the instrumental set of four you’ll find on this EP, “Electric Eclipse” also proves to be one of the most rewarding voyages to take in this whole experience of sound we’ve got goin’ on with Electronic Melodies.  There’s lots I find impressive about this track from the brilliant production to the selection of sounds & how this entire song moves from such a chilled-out opening to such an intense melody by the time it ends.  Smart arpeggio-style melody leads the way with the pace, the strings are stunning when they appear on this track as well, and you’ll find the surrounding elements swirling throughout the atmosphere of the music on “Electric Eclipse” add incredible doses of character & personality into this song.  It’s got drama, it’s got bold melody & bright melody working perfectly in tandem, and the vibrant flexibility in both the movement & sound you’ll find throughout this song have it standing out in all the right ways.  The breakdown is rad, the build-up/bringback is even better; “Electric Eclipse” is a great cut.

“Latitude” spreads out into more serene & atmospherically-inclined sound for the majority of its length, until eventually introducing guitars into the mix with about a minute or so still left to go on the clock.  The ice-like melody on the surface is excellent, I dig that the drumbeats are inventive as well, and the strings are as gorgeous as always; in behind the main layers, you’ll also hear subtle additions to the brightness of the aura of “Latitude” that work really well too, becoming more present as the song plays on & tying the ending to the beginning, bringing it all-around full-circle for ya in its own unique way.  Best way I can describe “Latitude” is to say that, I was enjoying myself so much by the time the guitar arrived at around the 1:45 mark, that I wasn’t always sure it was needed inside this less-than three-minute tune; it’s not quite as jarring of a combination as what we experience in the contrast between sounds on the “Lost (Vocal Mix),” but it might be one ingredient more than what the recipe calls for.  Hard to say…not gonna lie to ya, it’s much the same as I feel about the vocal pattern & idea in the “Lost (Vocal Mix)” in that respect…as in, what Glenn’s doing works, but is it the right fit for this particular song or does it move the end results forward?  That might be up for debate here…and I could see/hear arguments for both sides of that…there have been times where I’ve listened to “Latitude” and felt that last touch of guitars stole the show, other times where I wanted the first part of this song back when the guitars showed up too…if I’m being fully honest with Murawski here, it’s almost like two separate ideas.  They do converge in their own way…I suppose what I’m saying is, they’re both lead-ideas…as in, strong enough to define their own songs individually…combined together though, I’m not as sure they get the oxygen that both these ideas deserve, and ultimately they kind of end up competing for our affection.

The “Waiting (Vocal Mix)” was where things got very interesting on this record, and revealed a new dimension of Glenn’s music where the vocals were a much better fit overall.  I say it like that, because I’m averaging it out – but if we’re dissecting this song part-by-part, I like the verses and I love the chorus.  I’ve pointed out a few times on these pages of ours how, as lyricists, we can spend all this time writing a whole bunch of words, and sometimes it’s a hum, or an ohhhh, or a single-word that becomes the main hook people remember, which is definitely the case here.  But it’s not just that it’s a really strong hook that makes me like it – this is where we can also hear the fact that, Glenn can, in fact, sing quite well.  And then not only that either, but he’s also got a distinctly unique voice that’s powerful, emotionally expressive, and fully moving with what he brings to the “Waiting (Vocal Mix).”  Sure it’s got its Alt/Indie qualities goin’ on fused-in with the electro-vibes of this tune when it comes to the vocals & music – and I’ll admit, I wasn’t sure I was even going to like this song when I took my first spin through the opening verse.  But then, that hook came along…the simple but oh-so-effective way he sings the title in the chorus absolutely hits the heart dead-on…you genuinely feel that moment as a listener.  Considering the fact that “Waiting” has what’s also arguably the most engaging music coming along with it, you gotta dig the win that Glenn comes out with on this song overall.  I grew to like the verses more than I initially did – all I’m looking for there is that energy/metering to stay consistent, and it’s a tougher grind at times when it comes to the smoothness you might be looking for there.  But then like, what – am I supposed to just not listen somehow and then miss out on the most spectacular transition on the record that happens around the 1:20 mark?  Not freakin’ likely people – you know I listen start to finish, that’s what I do.  Complements to the chef for the moment nearly a minute later-on as the strings come in with more presence and brings us gently to the end of “Waiting (Vocal Mix)” – there’s lots of great aspects of this song that I’d be fully encouraged to continue to explore if I were Glenn.  You’ll hear it in the main hook of “Waiting (Vocal Mix)” – it’s far from typical, but man is it something you’ll completely remember…and that tells ya he’s tapped into something uniquely special here…which is a great sign.  Not only does this cut make for an exceptional experience in many ways to begin with, but even with “Waiting (Vocal Mix) maybe being a bit uneven between the strength of its parts overall, it still reveals that, if Murawski is going to continue on with vocals in his music, that he has the skillset to do it, 100%.  Sometimes a single word is all it takes – Glenn gets the absolute maximum out of the one he’s chosen.

So maybe you like your Murawski with vocals…maybe you don’t…maybe that matters to him…maybe it doesn’t at all – bottom line is, he HAS clearly considered your feelings on the subject, and like I said, he’s got instrumentals of both “Waiting” and “Lost” on here for you so that you can enjoy these songs any which way you’d like to.  And one way or the other, respect to the man, he’s achieved the goal in that sense – I think that for people like myself that know just a bit about his catalog so far still get a lot of what they love about Glenn’s sound in spectacularly well-constructed melodies that are often as compelling as they are beautiful; and the introduction to the vocal-aspect of his music here shows a lot of creativity & promise by the end.  As always, it’ll be interesting to hear where his music takes him next.