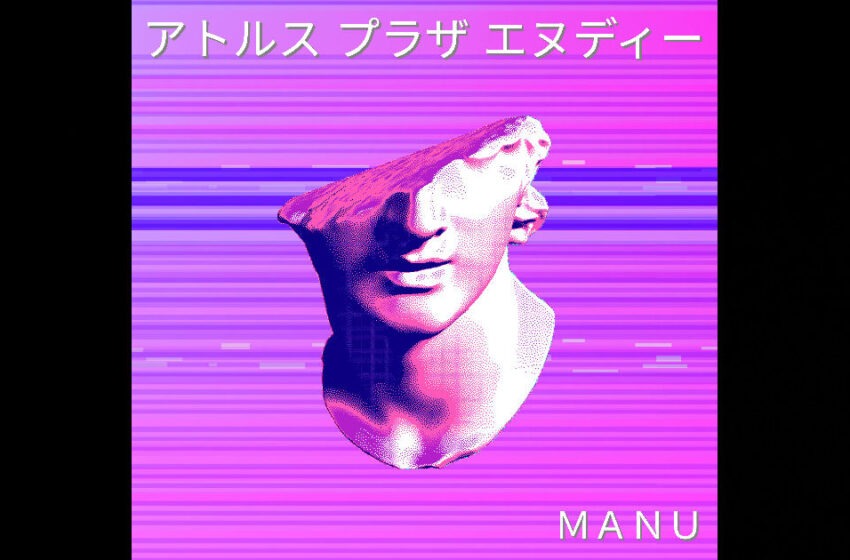 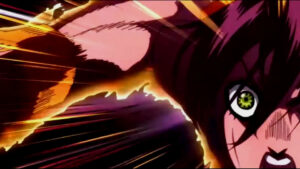 Towards the end of last year, we had the pleasure of checking out this curious musical oddity known as ATLS PLAZA N.D. in a review of the ME/NOT ME EP, and discovered a quick connection to the amount of authenticity & creativity taking place within the multi-dimensional Vaporwave vibes we found.  Back in action already with a brand-new EP called Manu – ATLS PLAZA N.D. is continuing to surge within the Electro circuits out there online, and stimulatin’ the brainwaves of listeners all around the globe with an intellectually-based style of sound that’ll get your neurons all fired up.  Ain’t no doubt he was a kid that grew up playin’ in a different sandbox from the rest, you dig?  This is what ATLS PLAZA N.D. had to say about his latest record:  “Manu is many things, and also means ‘Human’ in Sanskrit.  The first track, is “108” which is a holy number and represents Shiva, masculinity.  The 2nd track, “Part 49” (these songs are my Fiancee’s name in Kanji) represents Shakti, the divine feminine power.  When you combine them, you get Shiva / Shakti.  There are 54 letters in Sanskrit, each letter has both a masculine and feminine energy.  (54 x 2 = 108).”  You see what I’m saying?  No one out there could accuse this guy of not putting thought into his material, that much is clear; and while that might fly right over my mathematically-challenged head and limited resources in my lobes…for some of you out there, you’ll read that and be interested right away in how this all factors into the music being made by ATLS PLAZA N.D. – and I’d certainly assume that, the more you understand the philosophies driving his songs, the more you’ll get out of them all.  Me?  I’m no Socrates…I just know what sounds good, and I’m all about uniqueness – I might have limited experience in listening to this guy, but Manu seems like the best I’ve heard so far. 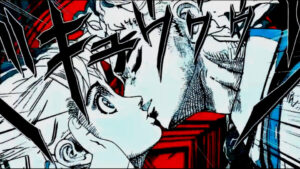 Personally speaking…I’m all about it!  Right as this EP started, I could sense great things coming with Manu as ATLS PLAZA N.D. launched into “108” as this set of two began, immediately revealing the kind of clever & hypnotic combination of sound & style you can easily be mesmerized & captivated by.  Which I’m proud to say, I was!  That’s what I’m talkin’ about y’all…this direction of Electro, which is technically Vaporwave according to the man direct, shares so many values of its even bigger umbrella underneath the IDM category, and it’s genuinely exciting stuff to listen to, while also being remarkably chilled out.  Like…a track like “108” isn’t going to punch you in the face with bombastic sound or even really that many dedicated hooks when it comes right down to it…not the typical audible hooks you’d expect to find, no – the REAL hooks here, are in the innovative technique and the endless creativity to be found in the music being made by ATLS PLAZA N.D. without question.  Don’t get it twisted & don’t get me wrong…I’d absolutely argue all day long that the piano melody he’s got at the start of “108” is a verifiable hook that would & will catch your attention when it gets the opportunity to play out its full length – but that’d almost be too straight-ahead, too normal, and likely too easy for this artist/producer.  ATLS PLAZA N.D. is lookin’ to challenge himself more than most do, and as a result, his music tends to reflect that.  I don’t expect everyone out there in the world to be able to hang with “108” – I just wish that WAS the case is all…realistically, I get it – the unexpected unpredictability of the way ATLS PLAZA N.D. so brilliantly edits, chops, expands, and uses his toolkit of production effects to his advantage isn’t going to be for everybody – but I don’t think you go into making Vaporwave music ever expecting that anyway.  ATLS PLAZA N.D. has clearly put a ton of thought into the uniqueness you’ll find in “108” – and in my opinion, he’s come out with exceptionally genius results.  Somewhere in the middle of a Four Tet and a Venetian Snares, you follow me?  You get the chilled-out mellowness & melodic nature of Four Tet, and you infuse the unpredictable nature & deviant cleverness of something like Venetian Snares, and voila – you’ve got something like “108” that sits perfectly in the middle.  Which in itself, is awesome – it basically establishes a flexible vibe & versatile recipe for being more accessible than either project has ever been; a track like “108” is generally more exciting than most Four Tet tracks as a result of the many twists & turns in its design…but it’s not so hyperactive like Venetian Snares that you can actually absorb how this cut morphs and transitions along the way.  Key moments like around the three-minute mark when you meet that first departure and expansion of the entire song into its second-half are crucial, and pulled off with spectacular professionalism…ATLS PLAZA N.D. has a genuine knack for being able to include sounds, glitches, and movements that others would never get away with, largely because of the technique applied, the perfection in the mix, the surprise factor & uniqueness in his music.  The dude makes precision moves with purpose y’all…listen to how this song changes almost altogether as it passes the three-minute mark and how it eventually finds its way back; it’s as fluid as it is flawless, even despite its many intentional glitches & stutter-shots…which incidentally, are completely 100% awesome.

If you tuned into the most recent episode of the SBS Podcast, you had a chance to check out the second half of the Manu EP through a song called “Part 49,” in addition to hearing me rant and rave about the music of ATLS PLAZA N.D. a whole bunch more.  What can I say?  I’m a fan!  I ain’t gonna try to hide it – but don’t go gettin’ any ideas y’all, I’m still every bit as objective as I’ve ever been as a critic.  The facts are, I’m just not hearing ATLS PLAZA N.D. make any moves I’d even remotely suggest he’d change in what he’s created on the Manu EP – both of these songs flex serious skill and wild degrees of creativity combined.  I already told ya that the style of music he makes might not be for everyone (which incidentally, is true of ALL music anyhow!) – but that’s really it y’all.  When it comes to technique, tone, textures, sound selection, innovative production…creating music that stands out for its skillful merit and stellar use of melody in the mix…I mean…ATLS PLAZA N.D. has got it all locked down TIGHT as it should be.  He’s put in the work, and songs like “108” and “Part 49” prove that.  He’s not looking to simply retread over terrain that’s already been trodden over a million times – he’s proudly blazin’ his own trail, and the kind of genius-level instincts he displays in a track like “Part 49” should go a long way to confirm what I’m sayin’ is true.  There’s something special starting up here in the music of ATLS PLAZA N.D.’s music, even if it defies our description or ability to comprehend it – that’s the natural effect of hearing something that’s ahead of the game, which is exactly what this artist is.  Of the two cuts, I’m gonna tell ya that “Part 49” is probably the more accessible overall in the set…but that’s hardly a concession of any kind, that’s just the reality of having a few more tangible enticing melodic moments and a bit more ear-candy in the mix beat/energy-wise…it’s still every bit as unpredictable as “108” is though, if we’re talkin’ about the creativity, structure, flow, and flexible vibe you’ll find.  Y’all can call me crazy if you wanna – I’m just tellin’ ya what I hear…and for me, ATLS PLAZA N.D. has been heatin’ up these speakers of mine pretty damn nicely over the course of this winter with his Vaporwave tunes…I like where this is heading.

Keep your eye out for a separate video-posting on ATLS PLAZA N.D.’s “Part 49” from the Manu EP coming out later this month…make sure to have a listen to the SBS Podcast featuring that song as well by clicking here – and check out everything else you can by the man by following the official links below!