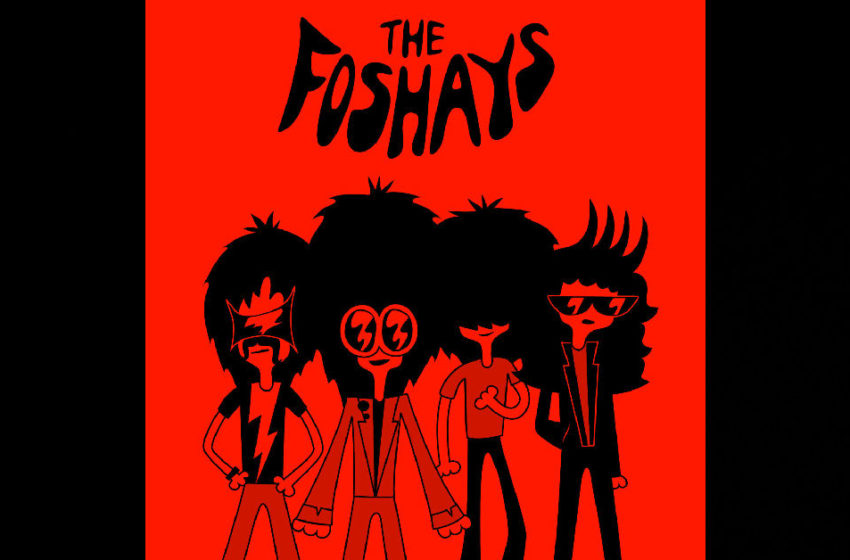 “We are the cartoon heroes, oh woah ohhhhhhh!”

Wait a second…that’s Aqua…my bad, my bad.  Still applies to this though!

We’ve been rocking along with this animated crew ever since 2017 technically, way back when I first reviewed the lead-single “Til It’s Gone” by The Foshays.  I became an instant fan and have remained that way ever since; not just because they’ve got a unique approach to the music-scene, but because their music is freakin’ great as well!  The Foshays First EP has just been released in October this year, bringing together the first singles we know of & two additional new tunes, along with the official comic-book that highlights the hijinks of this cartoon band.  Harry, Joey, Freddy, and Franky are back on our pages at long last – and hell, they were even nice enough to send over a copy of the EP (a 45 RPM even!) & their full story.

That’s how lively this band is…The Foshays might be cartoons, but they know how to promote a record and use the mail system just fine – they don’t let things like being two-dimensional stand in their way. 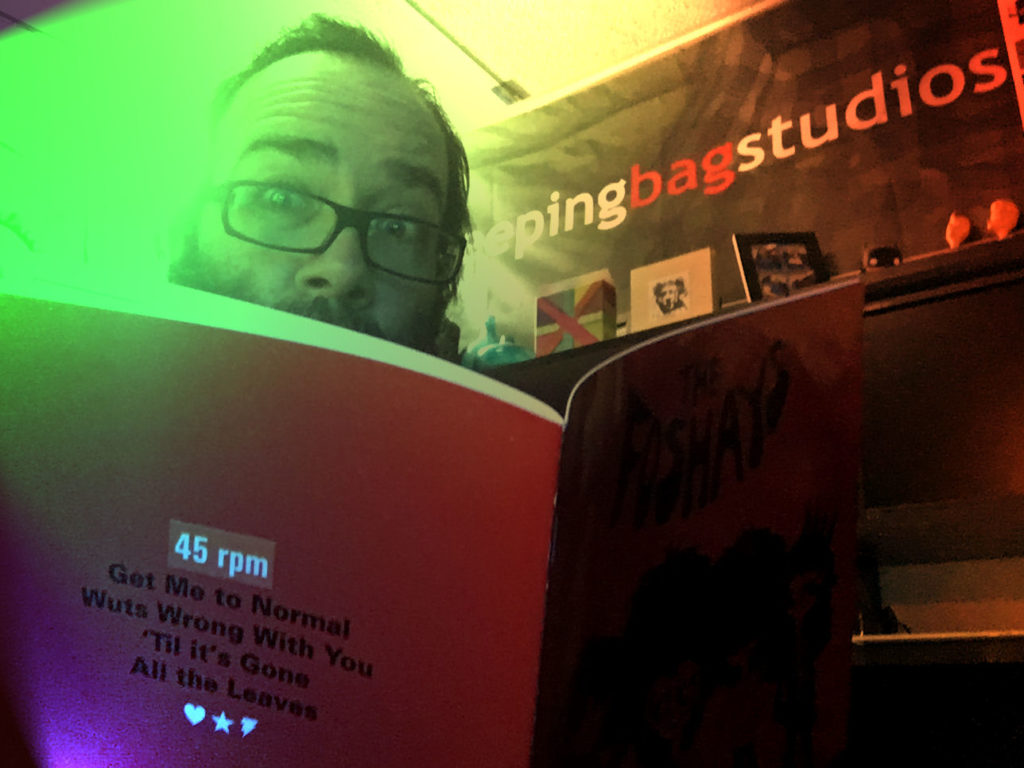 What can I say?  These guys make music completely FUN.  They’ve got the moves, they’ve got the grooves, and they put’em on display immediately on the first track “Get Me To Normal,” which is…hmm…insanely catchy to say the least!  I don’t want to say that The Foshays have been holding out on us so far…but this first cut on The Foshays First EP might very well be my favorite of the entire bunch.  In fact…I think I’m just gonna up & declare this as a fact – it IS my favorite song off this record.  Tons going right for The Foshays here…drums are perfection, the backing vocals are absolutely essential, and the contributions on the saxophone are killer.  From a sheer songwriting standpoint however, in terms of what the people out there are gonna hear…I think this band raises the stakes & standards right from the drop here as soon as “Get Me To Normal” begins – it’s built on hook after hook after hook!  And then some!  Absolutely stellar design to this tune that takes you from the brilliantly catchy & stylistic sounds of the verse, into radiantly vibrant energy that brings the chorus up to where a chorus belongs; there’s not a moment of this tune that’ll keep you from listening or turning this groove right up to the rafters.  Easily the most single-worthy cut I’ve heard from The Foshays since hearing “Til It’s Gone” for the first time way-back-when – I think “Get Me To Normal” is one of those rare Pop/Rock gems that’ll never stop shining, never become dull over time, and never leave your playlist.  In all the right ways, a song like “Get Me To Normal” is as playful as it gets within the realm of music that can still be taken just as seriously – this is really well crafted and geared to deliver…not a single solitary second out of place.

Of the four cuts on the record, “Wuts Wrong With You” will probably take a few more spins than the rest to make its impact on ya, whereas each of the others immediately stand out for one reason or another.  Not a bad song by any stretch of the imagination, just not as instantly ear-catching as the rest of what you’ll find is all.  They can’t ALL be our favorite song right?  Plus let’s not forget – this is still The Foshays First EP – no self-respecting artist or band out there wants to peak on their very first record and have no more room to evolve from there – “Wuts Wrong With You” shows there’s still space for this band to grow in the future.  It’s still fuzzed-up fun, still packs in a loose groove & vibe that keeps the atmosphere light & inviting to listen to, and still sounds cohesive with the rest of what you’ll hear on The Foshays First EP – lots of positives to be found in all that.  Credit to the flow they’ve created, “Wuts Wrong With You” plays smoothly and confidently, relying on hooks that are in many ways timeless in the tried, tested, and true sense.  There’s a lot of personality and identity in the music of The Foshays, and generally speaking, there’s still no lack of that on a song like “Wuts Wrong With You” – it’s just not presented in as amped-up of an atmosphere like the energy in the two tracks surrounding it from both sides.  Sometimes you gotta recognize a spot on a record that’s a tough one to fill…or at least a tougher one than others experience in the final lineup of songs…”Wuts Wrong With You” has the deck stacked against it more than a lil’ bit when it comes to that, but The Foshays still come out with an entertaining tune nonetheless.  For myself personally, I think they’ve still really got it goin’ on with the music on “Wuts Wrong With You” – it might be a more subtle & relaxed vibe at work here, but it works well.  Vocally, I’m not against it…I think the pre-chorus hooks are probably the strongest you’ll find on this particular cut, but the other parts hold their own too; it’s only by comparison to the other tunes on this EP that this track has a harder time making an impression or lasting impact on us.  Ultimately, that speaks to the strengths in the three other cuts you’ll find on The Foshays First EP, and that’s a good thing too at the end of the day.  If two outta three ain’t bad for Meatloaf, then The Foshays are crackin’ the bat even more successfully with a solid three outta four, aren’t they?  I do dig on the throwback-inspired sounds they’re creating in today’s world…kinda similar to The Dandy Warhols in a way or two.

“Til It’s Gone” still hits hard with its freak-out sound & style…you can read my previous thoughts on this track in the past review written back in 2017 by clicking here.  The synth pulse that runs alongside the beat of this lead-single from The Foshays gives it just enough of a digital edge to provide it with a bit more of an advantage in pulling the people in with its rapid paced movement.  In the context of the record itself – like the actual record, the 45 I was mentioning at the beginning of this review – “Til It’s Gone” starts the second side, and audibly, it SOUNDS like it’s ready to reset the standards back to where they were before the previous track’s more chilled-out energy on “Wuts Wrong With You.”  Credit where credit is due dear readers, dear friends – The Foshays gave themselves less than two minutes to get out there and make the magic happen with “Til It’s Gone” and still managed to stuff this song with time for the instrumentation & musicianship to stand out amongst its many hooks flying at ya.  It stood out when I first heard it, and “Til It’s Gone” still makes a wild impression on ya here on The Foshays First EP without question; it’s that mod-rockin’ kind of song that just gets ya groovin’ along with ease.

“All The Leaves” was first reviewed here on our pages last year as The Foshays grew closer to the official release of their EP, revealing a slightly more matured sound & direction than we experienced with “Til It’s Gone” from the year before.  Ultimately if we’re looking at the songwriting & execution, I’d probably fall on the side of “All The Leaves” being the better of the two tunes released prior to the official EP – but if you were to ask me which of these two tracks were more likely to get the people’s attention, I’d completely side with “Til It’s Gone” and cite its relentless catchiness.  There’s more meat on the bone in listening to a song like “All The Leaves” in my opinion…maybe you’re in the mood for “Til It’s Gone,” maybe you’re not – but when it comes to a song like “All The Leaves,” it seems appropriate at any time.  The Foshays are known for working in a whole bunch of crossover sound from the 60’s on-forward, which they’ve already revealed to us in countless ways from the moment this EP began, and the mix of 60’s/70’s influence on “All The Leaves” has this cut oozing with cool.  All-in-all, it makes for a solid ending to what’s definitely been a great set of tunes to formulate their first impression on ya, no doubt.

As far as the comic goes, which is an episode entitled “Gig Hex” – many of you bands out there will certainly be able to relate to a lot of what goes down as The Foshays make their way to the stage for their first headlining show.  Y’all know it ain’t easy!  And sometimes…sometimes it seems as if the very universe itself is doing its best to keep you from entertaining the people out there.  The Foshays run into a whole bunch of hilarious scenarios that try to thwart their efforts…and if I’ve learned anything about cartoons & comics over my many years on planet earth, chances are, they’ll run into many obstacles in the future to come as well.  The main question is – do The Foshays have what it takes to overcome all odds and still get up on stage to rock the place?  Spoiler alert – YES – but as far as the definition of success is concerned, you’ll find that’s largely open to interpretation from all members of the band.  Entertaining for sure, and it also includes multiple references to the songs on the record as well, so if you’re reading along & listening at the same time, you’ll pick up on extra pieces involved in the story.  It’s a smart way to create crossover entertainment that uses multiple mediums to make its mark; they’re bound to snag a few comic lovers and make genuine music fans out of them, and the same is true vice versa.  Bottom line is, The Foshays are putting in the effort in several ways that warrant your attention. 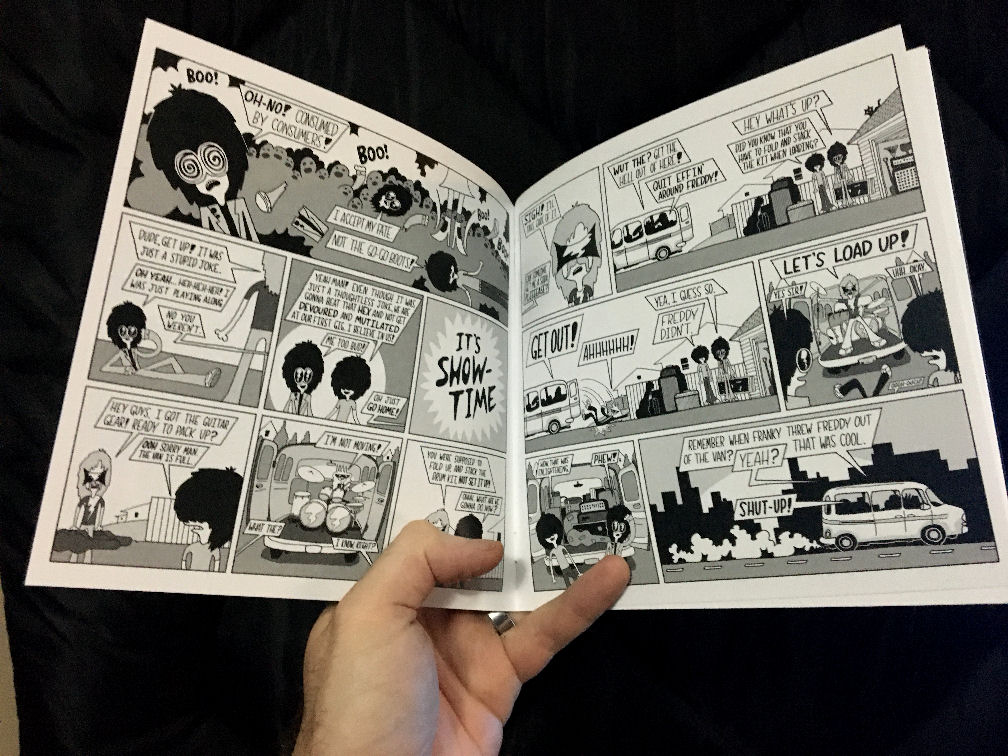 Given that the information is all up online at their main website, I don’t have to feel too guilty about letting the cat out of the bag here and telling you that…SHOCKER – the music is actually made by real people and not cartoons.  And like I said, credit where credit is due – The Foshays music is actually made by a “very real life music group” called Mannequins On Welfare, consisting of the talents of Aaron Biggar (Drums, Backing Vocals), Jonny Fang (Keyboards, Organs, Piano), Louise Sherman (Bass, Backing Vocals), and BiL Sherman (Lead Vocals, Guitars, Art Direction – and the entire comic’s writing & illustrations).  Dale Monzon is the legendary sax-man you hear throughout the record, notably also playing the flute for the band when you hear that show up in songs on The Foshays First EP as well.  They all deserve credit for their contributions for sure – The Foshays are a tight band that provide ya with a ton of fun on several levels…and I’ve got no doubt that the people out there have certainly got time for more of that in their day.  They’re not political, they’re not pretentious – they’re a band built to turn good times into great ones with their party vibes and amped-up infectious energy.  The Foshays are pretty damn rad when it comes right down to it, and a whole lotta fun, whether you’re listening to them OR reading about’em.

We’ve got an interview set up with The Foshays for the SBS Podcast in the near future too – so make sure to keep your eyes peeled on our pages here for that to come out.  In the meantime, keep your eyes & ears affixed to The Foshays, and visit their main website at:  http://thefoshays.com